A neighborhood in Columbus, Ohio, was evacuated Wednesday after authorities arrested an armed “sovereign citizen” facing eviction and then found bombs and bomb-making supplies when they searched his foreclosed home.

Mark Kulis, 55, was armed but arrested without incident by Franklin County sheriff’s deputies who waited for him to leave the residence before making the arrest at a nearby car wash, officials said. 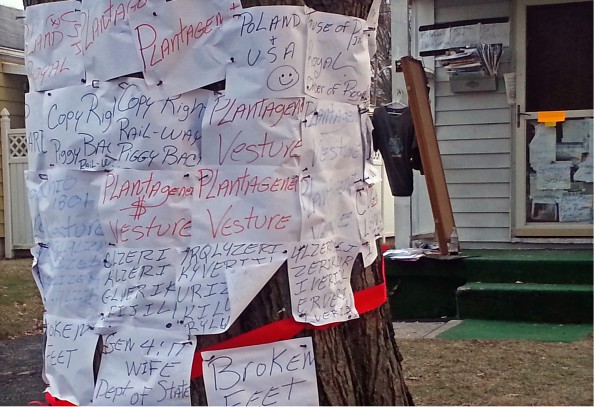 Then, after investigators found flash powder and at least five assembled improvised explosive devices while serving a search warrant at the suspect’s home, nearby homes were ordered evacuated. One of the homemade bombs, rigged to a motion sensor, was found in an oven in the kitchen, WBNS-TV in Columbus reported.

It wasn’t clear what purpose the bombs were meant to serve.

One of the improvised explosive devices, deemed too unstable to move, was neutralized in the home with a small controlled explosion carried out by bomb squad technicians, authorities said.

Neighbors told Hatewatch that Kulis has spouted antigovernment rhetoric for a decade or more. Windows in his home, along with a front screen door and a tree in his front yard, were plastered with hard-to-decipher signs and references to sovereign citizens, most of whom believe they are immune to many tax and criminal laws. Inside walls and ceilings also were covered with antigovernment scribblings, including references to various politicians like President Obama and Ohio Gov. John Kasich, the Columbus Dispatch reported.

Other neighbors said they viewed Kulis as a harmless loner, perhaps a victim of mental illness — but all expressed surprise when told of the bombs fond in his home. 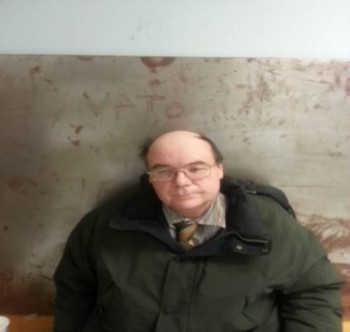 Kulis initially was booked into the Franklin County Jail on a charge of carrying a concealed weapon, but additional explosive-related charges and perhaps federal charges are expected shortly.

Sovereign citizens, who generally believe the government has no control over them, are known for filing nonsensical and frivolous court papers and having frequent run-ins with police, often after they are pulled over for having no vehicle registration. (Sovereigns typically think they are exempt from government requirements for vehicle tags, insurance and driver’s licenses.) In the United States, seven law enforcement officers have been killed since 2000 by sovereign citizens, and police contact with the antigovernment extremists seems to be increasing.

Most infamously, two West Memphis, Ark., officers were murdered in May 2010 by Jerry and Joe Kane, a father-son team of sovereigns, during a traffic stop. Both Kanes were killed less than an hour later in a subsequent shoot-out that left two more law enforcement officers badly wounded.

Authorities in Columbus apparently were keenly aware of the threat posed by sovereigns.

Instead of knocking on the door and telling Kulis he had to move out as part of a foreclosure eviction, deputies knew they were dealing with someone with an antigovernment agenda who could be unpredictable, the sheriff said.

“From the beginning, we took extreme caution during this incident knowing the suspect was a sovereign citizen,” the sheriff told Hatewatch. “The potential for the loss of life is great when weapons and explosives are involved.”

One neighbor told Hatewatch that Kulis was “very religious and would carry a Bible around a lot.”

“He once told me he had testified against a cop and a judge and, because of that, he thought the cops had put out a hit on him,’’ said the neighbor, a retired factory worker.

Kulis twice cut a television cable leading across the neighbor’s house, and accused the neighbor of tapping his phone. “Every time a state vehicle would go by his house, he’d give them the finger,” the neighbor said.

Another neighbor said he’d attempted to befriend Kulis and privately thought he might need some counseling, but was afraid to suggest that. “He also made it known he had guns and was ready to use them. I think he even mentioned bloodshed.”

“He kept seeing these black vehicles passing by his house,” the neighbor said of Kulis. “He once told me somebody drilled a hole in his foundation and inserted termite larva. I decided at that point to back away.”

“I had no idea he was capable of making explosive devices until today when our whole neighborhood was evacuated,” the neighbor said.