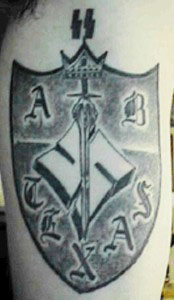 With a trial set to begin in three months, federal prosecutors in Texas have obtained guilty pleas from 19 of the 36 Aryan Brotherhood of Texas (ABT) members accused of multiple acts of murder, robbery, arson, kidnapping and narcotics trafficking.

The latest pleas came last week from Ronald Lee “Big Show” Prince, 44, and Stephen Tobin “Scuba Steve” Mullen, 44, both of Dallas. Both men pleaded guilty to one count of conspiracy to participate in racketeering activity. At sentencing in October, they both face maximum sentences of life in prison.

Like the others who have pleaded guilty, Prince and Mullen confessed to being part of a criminal enterprise that federal investigators claim has operated in and out of various prisons since at least 1993.

The ABT, established in the early 1980s, is considered one of the most violent crime syndicates in the United States. It was modeled on the white supremacist philosophy of the Aryan Brotherhood, a California-based prison gang formed in that state’s prison system during the 1960s.

By striking plea deals with some of the defendants, Justice Department prosecutors appear to be setting the stage to have some members of the enterprise testify against their former co-conspirators in exchange for lighter sentences under “substantial assistance” provisions of sentencing guidelines.

Late last year, the Justice Department withdrew its option of seeking the death penalty in the case. Still, many of the defendants face life in prison without the possibility of parole.

The case began with an initial racketeering conspiracy indictment brought in November 2012 against 36 members of the “violent, whites-only prison-based gang with thousands of members operating” in and out of prisons throughout Texas and elsewhere. Since then, there have been two superseding indictments, as prosecutors fined-turned their cases against remaining defendants, using a secret grand jury and cooperating defendants and witnesses.

The federal racketeering law allows prosecutors to include multiple crimes in one all-encompassing indictment.

Maynard and Roberts pleaded guilty last year. Roberts was sentenced in September to 30 years in federal prison without the possibility of parole for crimes that included the ordering of six murders in 2011. Maynard awaits sentencing.

Court documents allege the ABT enforced its rules and promoted discipline among its members, prospects and associates through murder, attempted murder, conspiracy to commit murder, arson, assault, robbery and threats. Members and associates were required to follow the orders of higher-ranking members, often referred to as “direct orders.”

According to the latest superseding indictment, an ABT prospective member had to be sponsored by an existing gang member. Once sponsored, the prospect would serve an unspecified probation term, carrying out various assignments.

The massive criminal investigation was put together by a multi-agency task force with officers and agents from the Bureau of Alcohol, Tobacco, Firearms and Explosives; the Drug Enforcement Administration; the FBI; the U.S. Marshals Service; the Federal Bureau of Prisons; Homeland Security Investigations; the Texas Rangers, a unit of the Texas Department of Public Safety; the Montgomery County Sheriff’s Office; the Houston Police Department, Gang Division; the Texas Department of Criminal Justice; the sheriff’s offices in Harris, Tarrant, Atascosa, Orange and Waller counties in Texas; police departments in Alvin, Carrollton and Mesquite, Texas, and prosecutors in the Montgomery and Atascosa County District Attorney’s Offices.