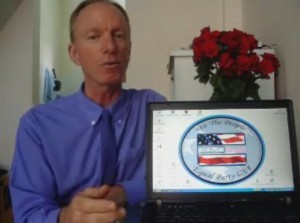 James Laffrey, the middle-aged Michigan man who idolizes Adolf Hitler and urges readers at his website to surreptitiously assassinate Jews, responded over the weekend to our queries.

Laffrey opened his missive by noting that Hatewatch had misinterpreted what he said about President Obama – namely, that he had “bought into the corporate media’s selling of the product called Barack Obama.” We took that to mean he initially supported Obama, but Laffrey says that was not the case. Regardless, Laffrey’s view of Obama quickly darkened after the election:

On that About page, you will see that I described my evolution of thought as I increased my investigations and knowledge. Part of what you will see is that I recognized that Obama was appointing criminals who had infested the Clinton administration. Of course, most of those criminals are jews. Names of cirminal jews reappointed during various administrations? Examples: Volcker and Greenspan (more recently as just "advisors"). Robert Reich. Rahm Emanuel. Many more.

We asked Laffrey, in light of his advocacy for murder, if he considers himself a Christian. He replied:

I am opposed to all religions because they are all mind poisons. This includes, of course, Christianity, Islam, the so-called religion Judaism, and their offshoots. The Creativity movement is specifically and openly against violence, so their efforts certainly will not get the job done of wiping out the parasites of humanity -- the jews.

Laffrey chided us for saying that he is calling for the “assassination” of Jews, though that in fact is a perfectly apt word for what he advocates. He then went on to discuss his “kill jews now” strategy:

If you look at my AmericanSolution page … you will also see the evolution of my knowledge and convictions, which I am always open about. (Also, my previous website, which you mentioned in the article, shows my previous level of thought.) I offer two strategies: the "party" strategy and the "kill jews now" strategy. I have said that we must pursue both strategies although, for practical purposes during this decade, "kill the jews" is the only strategy that is certain to provide a measure of success with every individual's effective effort.  ….