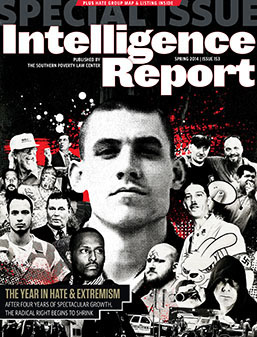 After four years of stunning growth, the radical right declined significantly for the first time in 2013, according to the latest count by the Southern Poverty Law Center, released today. But with a total of more than 2,000 groups, the extreme right remained at historically high levels.

The decline was due to an improving economy, dismay at the re-election of President Obama, law enforcement crackdowns, and the co-optation of the far right’s issues by purportedly mainstream politicians. It also reflected internal difficulties in the radical groups themselves, along with the failure of a whole series of their apocalyptic predictions to materialize.

As reflected in a number of right-wing terrorist plots uncovered last year, the decline did not seem to dampen the violence coming from the movement. In fact, the movement seemed to grow more hard-line as more moderate members dropped out.

“The radical right is growing leaner and meaner,” said Mark Potok, senior fellow at the SPLC and author of the report. “The numbers are down somewhat, but the potential for violence remains high. Moreover, there is a disturbing dynamic at play. At the same time that the number of extremist groups is dropping, there is more mainstream acceptance of radical right ideas.”

The report is contained the Spring 2014 issue of the Intelligence Report, an investigative magazine published by the SPLC. It also includes a hate group map with state-by-state listings of hate groups. Other articles in the magazine: