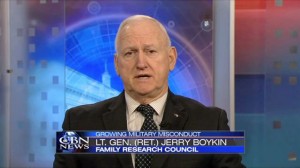 The Family Research Council’s executive vice president, Lt. Gen. Jerry Boykin (retired), was caught on a “hot mic” following a panel yesterday at the National Security Action Summit, which was held just down the street from the Conservative Political Action Conference (CPAC). Boykin could be heard, in an awkward attempt at humor, telling a reporter from Israel that “Jews are the problem” and the “cause of all the problems in the world.” Boykin told another reporter that President Obama identifies with and supports Al Qaeda and the Muslim Brotherhood and uses subliminal messages to express this support.

Boykin appeared on a panel yesterday – “Benghazigate: The Ugly Truth and the Cover-up” – as part of the summit held near Washington, DC, which was organized by Frank Gaffney to highlight speakers, like himself, who were not invited to speak at CPAC. Gaffney has alienated himself by repeatedly claiming that the American Conservative Union, which organizes CPAC, has ties to the Muslim Brotherhood. Boykin, who is FRC’s second in command after Tony Perkins, fits right in at such a gathering.

After the Benghazi panel came to a close, the video feed for the live webcast went dark but audio continued to be broadcast. Boykin could be heard speaking with two reporters. His first conversation concerned Obama’s supposed support for Al Qaeda and the Muslim Brotherhood.

Boykin said that Obama’s “first real public appearance overseas was in Cairo,” and dubbed that the “notorious apology tour.” “If you understand anything about Islam,” he continued, “there are subliminal messages.” Obama’s message to them is “I understand you and I support you.”

Boykin argued that “Al Qaeda, the Muslim Brotherhood and everybody else” are taking advantage of this support and the “opportunity that they see that they have a president that identifies with them, that has been supportive of them inside the United States and is unwilling to go against them.”

Boykin could be heard recommending that the reporter contact FRC’s head of media relations, J.P. Duffy. He wrapped up that conversation and was approached by Henry Schwartz from IsraeliNationalNews.com, a right-wing Israeli news site run by Arutz Sheva.

A person, perhaps a PR flack, started to ask Boykin, “Would you mind doing a two minute interview with Israel, Israel National News?” (sic). Boykin cut in with “the Jews are the problem, the Jews are the cause of all the problems in the world.” The same person, or perhaps Schwartz, could be heard laughing and said “I know, I know, that’s why we’re trying to fix everything.” Watch:

Boykin has a history of making odd and outlandish comments about Jews, Muslims, Obama and much more. Boykin has said that Jews must be converted to Christianity and believes that American Jews don’t understand Hitler and support Democrats as a result. He has also argued that Obama is using the Affordable Care Act to create a Hitler-style Brownshirt army to force Marxism on America.

Boykin is best known for his animus against Muslims. He has argued that the First Amendment does not apply to Islam. He has also said that Christians must go on offense against Islam, there should be no more mosques built in America and there can be no interfaith dialogue between Christians and Muslims. Not surprisingly, Boykin’s military career was derailed by his anti-Muslim advocacy, earning him a rebuke from President George W. Bush and a Pentagon investigation that found he had violated military rules.

Yesterday’s hot mic audio demonstrates, yet again, that Boykin’s outrageous comments over the years were not misstatements. He honestly believes this stuff. Now consider the fact that he once served as Deputy Under Secretary of Defense for Intelligence and is still viewed as a credible expert on terrorism by Republican members of the House Armed Services Committee. No matter your politics, Boykin has no place in a reality-based foreign policy.