After a segregationist businessman’s products were dropped from major grocery chains over his promotion of slavery, South Carolina Lt. Gov. Glenn McConnell – who was recently selected to head the College of Charleston – went out of his way to sell the man’s products.

Maurice Bessinger, an unrepentant segregationist who ran the Piggie Park chain of barbecue restaurants in South Carolina, sparked a controversy in 2000 when he began flying the Confederate flag over his restaurants – a reaction to the state government removing the flag from the capitol dome. Soon it was discovered that Bessinger was selling pro-slavery materials at his restaurants, including a pamphlet entitled “The Biblical Justification for Slavery.” 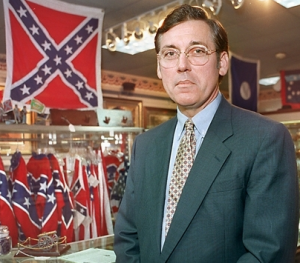 McConnell at his memorabilia store in 1999

Bessinger, who wore a white suit and appeared atop a white horse in promotional materials, had made a name for himself during the Civil Rights era for refusing to integrate his restaurants and leading the National Association for the Preservation of White People. He posted signs at his stores telling African Americans they were not welcome. The U.S. Supreme Court eventually forced him to integrate and his restaurants went back to, more or less, business as usual.

By 2000, South Carolina had changed, but Bessinger hadn’t. According to The State, Bessinger was “distributing pro-slavery audiotapes and gave customers a discount if they bought his literature.” He claimed that slavery in South Carolina was “biblical slavery,” which he argued was more ethical than other forms.

Customers began boycotting his restaurants, and the NAACP and other organizations called on major grocery chains to drop his products – one after another, they did. Bessinger wrote in his 2001 memoir, “Defending My Heritage,” that six major grocery chains, including Walmart, had dropped his products by the end of 2000, and wholesale sales were down 98%.

When you read his memoir, it’s not hard to understand why. Here are a few choice quotes:

“I have concluded that the civil rights movement is a Satanic attempt to make it easier for a global elite…to seize power in the country.”

“The Civil Rights Act of 1964…destroyed property rights and le[d] to blacks being given special favors by government at the expense of whites.”

“It is politically correct to assume that segregation is evil” but the “facts about the Old South don't bear out this assumption.”

Bessinger also wrote that “Lest you think all has been bad, I have loyal supporters who have stuck with me through this battle.” “There are people,” Bessinger wrote, “who are driving miles, seeking out independent grocery stores...where they can find my products.” One of those places was Glenn McConnell’s Confederate memorabilia shop, which he ran with his brother for 20 years until 2009.

I wrote last week that McConnell came to the defense of Bessinger in 2002 when South Carolina electric and gas giant SCANA banned its employees from parking company trucks at Piggie Park restaurants. Then-State Sen. McConnell “threatened a legislative vendetta” against the company – i.e. revoking its “noncompetitive, monopoly status” – if it didn’t reverse course. He denounced SCANA’s policy as a “basic slap at free speech and freedom of expression” and accused the company of “discriminating against a man’s business because of his political beliefs.” He said that “people around the state are just outraged at the audacity” of SCANA, but he apparently wasn’t outraged by Bessinger and didn’t seem to understand why others were.

As it turns out, McConnell did even more for Bessinger. He not only defended the segregationist against a boycott on First Amendment grounds – he became a distributor of his products.

An Associated Press reporter visited McConnell's store, CSA Galleries (for Confederate States of America), at its new location in September, 2002. Describing the products on sale, he noted Bessinger's barbecue sauce. “Dumped by major grocers because of Bessinger's views on slavery, the sauce has room on the McConnells' shelves.” “Restaurants buy it by the case,” McConnell said.

By 2001, McConnell was featuring Bessinger’s sauce – available in different sizes and flavors – on his store’s website. The description read, “Maurice's Gourmet Blend BBQ Sauce America's most controversial.....and best tasting BBQ sauce. Boycotted by the politically correct. It's been popular for fifty years! Try it!”

The sauce was featured on the website up until the business shuttered. Here’s how the sauce appeared in 2009: 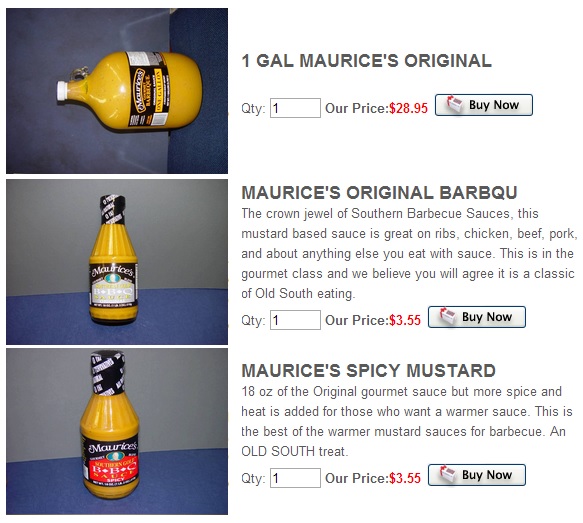 To recap, McConnell went out his way and proudly began selling a segregationist’s products at his store in 2001 after (and because) mainstream businesses dropped them. The following year he went to bat for that segregationist in the legislature.

McConnell’s support of Bessinger smacks of racism. It’s made worse by his steady attacks on civil rights advocates and silence about Bessinger’s repugnant views.

The problem for McConnell is that many of his past actions and statements have at least the appearance of racism. And the problem for the College of Charleston is that McConnell refuses to acknowledge this reality or address it head on.