Editor's Note: The BLM has apparently backed down in the face of the armed protest. They say they are going to release the seized cattle. 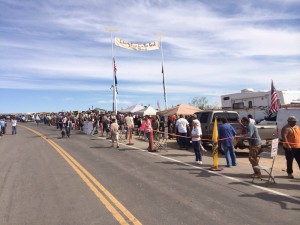 In the midst of widespread vitriol and antigovernment rage, the Bureau of Land Management (BLM) announced on Saturday that it was ending its operation to remove cattle from federal land that belongs to a Nevada rancher.

From national news outlets such as Fox News to the far reaches of the antigovernment internet, in the last week rancher Cliven Bundy and his issues with the BLM have ignited widespread passion. But in response to the BLM doing exactly what many had demanded, Bundy, who has been at odds with the federal government over fees to have his cattle graze on federal lands, said the fight had just begun.

Flanked by militia members equipped like soldiers, Bundy gave the BLM a one hour ultimatum to disarm its agents, dismantle BLM equipment and end what he has described as a tyrannical campaign of harassment against his family, which has raised cattle on about 600,000 acres of federal land dubbed The Gold Butte for generations.

“You report back to these people, we the people, in one hour,” Bundy ordered. “They [our demands] are not done and we’ll decide what we are going to do from this point on,” Bundy told about 1,000 supporters.

Now that the BLM has pulled out, it remains to be seen what the response of his many supporters, who have come from all of the country to his desert ranch, will be.