Faced with the condemnation of their church, Matthew Heimbach and Matt Parrott, founders of the white nationalist Traditionalist Youth Network (TradYouth), have decided to take a “sabbatical” from their racist activism, at least temporarily.

Heimbach and Parrott announced their departures on the TradYouth blog, saying last week that they were leaving the work of TradYouth to others after their priest asked them to cease and desist all racist activities.

But after years of passionately endorsing ethnocentrism and hate, their hasty departure hasn’t been a comfortable ride. 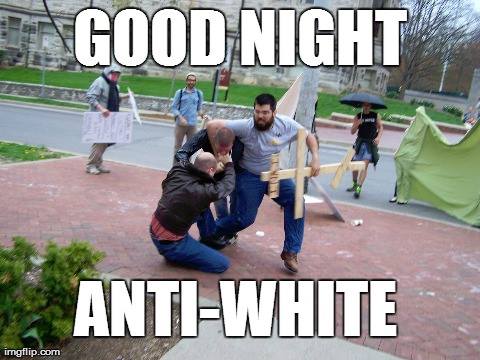 “I’m disappointed to the brink of illness, as my conviction remains that my White American people do have a right to exist,” Parrott wrote on the TradYouth blog. “I believe that the Holy Tradition of the Church is on our side. I believe that those who insist that Christianity is integrally anti-White will be proven wrong in due time.”

That cuts to the heart of what Heimbach and Parrott have been arguing for some time ––that their racist ideology comes from a place of love, not hate.

Yet through TradYouth, Heimbach and Parrott have consorted with organizations like the Council of Conservative Citizens, which argues that blacks are a “retrograde species of humanity.” They have rallied with the Knights of the Ku Klux Klan at the invitation of Thom Robb, a Christian Identity pastor who leads the group and for whom Heimbach claims to have “great respect.” They have stood side by side with the Aryan Terror Brigade, and attended rallies with the neo-Nazi National Socialist Movement (NSM), including one in Kansas City on the 75th anniversary of Kristallnacht, the Nazi pogrom that left more than 90 Jews dead and some 30,000 imprisoned in concentration camps.

When contacted by Hatewatch, Parrott insisted he and Heimbach have not stopped believing in white nationalism, but that they were submitting to church authority.

“With a clear conscience, I cannot actually renounce my positions unless I’m actually convinced that they’re wrong,” Parrott said. “But as a matter of discipline, I will cease what I’m doing, permanently if necessary. I pray that’s not the case, but it has to be worked through my authorities.”

So does this mean the end of TradYouth? At least for the time being, the Orthodox Church doesn’t seem willing to lend its pastoral blessing to Heimbach and Parrott teaching American university students about the “virtues” of ethno-nationalism, even if, as they argue, Orthodoxy endorses it. Heimbach and Parrott have turned TradYouth over to Thomas Buhls. What he does with it, they say, is up to him.

“This is not our project alone. It’s not our place to ‘shut it down,’” Parrott wrote. “We are going to humble ourselves to pastoral guidance, affording them the time they need to fully digest what exactly we are and what exactly we stand for.”

The Rev. Peter Jon Gilquist, of All Saints Antiochian Orthodox Christian Church in Bloomington, Ind., who confirmed Heimbach into the church on April 12, doesn’t seem willing to budge. In an April 29 “Statement Regarding Matthew Heimbach” posted to the church’s website, Gilquist showed no willingness to entertain the discussion.

“Though Matthew has made progress in coming to understand the teachings of Christ, he has not formally renounced his views promoting a separationist ideology. Orthodoxy rejects the teaching that churches or countries should be divided along racial lines,” Gilquist wrote in an April 29 letter to his church titled “Statement Regarding Matthew Heimbach.” In the letter, he ordered Heimbach to “cease and desist all activities, both online, in print, and in person, promoting racist and separationist ideologies, effective immediately.” Since then, Heimbach has gone silent.

But in a text message exchange with Hatewatch, Heimbach said his decision to take a hiatus from TradYouth came down to his devotion to his faith over all things. “I trust God in all this as to what He wants for my future and I also trust the Church to guide myself and all faithful Orthodox Christians around the world to a better understanding of sacred Tradition and God’s word,” Heimbach wrote.

Unfortunately for Heimbach, it’s very unlikely the church will see his activism quite like he does.