Usually, political debates are an opportunity for candidates to provide voters with enough information for them to make informed decisions before filling out their ballots. But Wednesday night’s Republican gubernatorial primary debate in Boise, Idaho, featuring the state’s top four conservative candidates, raised more questions than it answered.

Both men were on the program at the insistence of incumbent Gov. L. Butch Otter, who was accused by his Tea Party rival, State Sen. Russ Fulcher, of inviting the men to participate so that he could avoid Fulcher’s own questions. 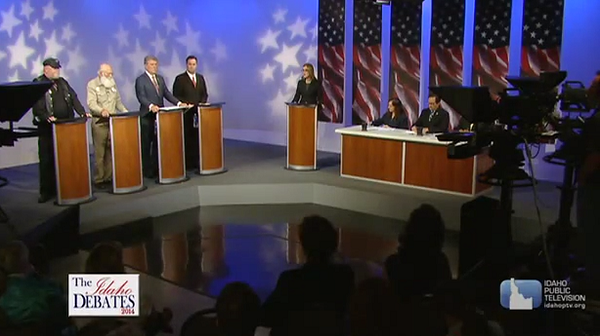 One of Bayes’ early statements was a rant about abortion, claiming it was against state law to even perform the procedure: "If I’m governor, I am going to enforce the law. And somebody says, ‘What about the Supreme Court?’ If the Supreme Court goes to hell, I'm not followin'. And I'm telling you folks, when you murder 56 million babies, you're asking for our country to be demolished."

He read from Scripture – Romans 1:24-32, to be exact – when he was asked about the recent court decision overturning Idaho’s ban on same-sex marriage, saying: “My main loyalty is to God Almighty, and what he says is what I go by. And this is part of the Bible.”

The reading concluded with the line: “Who, knowing the judgment of God, that they would commit such things, are worthy of death.”

Bayes also boasted of having been arrested for his home schooling advocacy when he was asked if he could govern. “They told me we couldn’t home-school. I prayed about it. I stood on my hind legs like a man. I told ‘em what I thought of ‘em, and the television would talk to me for thirty minutes or an hour: Well what would you do if they came out to take your kids? Well, you’d shoot ‘em! What else would you do?”

Bayes also had a scathing assessment of the two political parties: "I honestly think half of the Republican Party is Democrats and half of the Democratic is Communist."

Near the end of the debate, Bayes exclaimed: “Our energy plants that are run by atomic – they can stand one-fifteenth of an earthquake like that one in Japan! And my Bible says they’re gonna get worse and worse!”

The two fringe candidates also tried their hand at policy, voicing sentiments similar to those heard on the right surrounding the standoff at Cliven Bundy’s Nevada ranch.

“The first thing I want to do is take Idaho ground back from the federal government,” said Bayes. “The Constitution – the Idaho Constitution – states plainly that the federal government only owns a few buildings. The land is ours. We’ve got as much right to all the land in this state, including the wilderness, as New York has Manhattan. I’ve got as much right to see Manhattan Island like they paid twenty-four dollars for as they have to come out here and look at our wilderness. We’ve got a bunch of Eastern idiots running everything!”

Brown chimed in: “I agree with Mr. Bayes. The key is getting our land back from the feds. And here’s my plan of attack.  … OK, you go in there and you use spiritual warfare. Nobody – everybody talks about the natural. But I’m gonna talk about the other realm we need to extend. You bind those evil spirits that are behind the feds with the blood of Jesus, the name of Jesus, the power of entombment of the Holy Spirit, the power of agreement, the Word of God. Take air superiority, and then go in there with your tanks, on the ground, with [colleague Chris] Troupis’s lawsuits. Blitzkrieg.”

The somewhat astonished moderator interjected that the question she had asked was about taxes. Brown was unruffled: “Taxes are a drag,” he said. “I don’t even like to think about it. Fighting the feds is more exciting for me.”

Brown was also clearly unapologetic about the bigoted jokes and remarks he makes at his campaign website, “The Candid Candidate”. “You might find it offensive, but I hit everybody — Jews, Irish people, black jokes and religious jokes,” Brown said when asked about the site. “I don’t like political correctness! Can I say this? It sucks! … I’m about as politically correct as your proverbial turd in a punchbowl. And I’m proud of it. And I’m going for the vote of the real people.”

Indeed, as Idaho Statesman columnist Dan Popkey reported, Brown made a crude racist joke about “w-------” during the warmup for the debate and was warned that he would be cut off from questioning if he made such comments during the debate.

At the closing, Brown finished the tale of how God told him he would become president, including a mention of "trumped up restraining orders" that prevented him from seeing his kids. He also waved a signed statement from a "Masai prophet" that supposedly confirmed that God had told him this.

"You have your choice, folks,” Brown concluded, waving at his fellow candidates. “A cowboy, a curmudgeon, a biker, or a normal guy. Take your pick… We're leaving it up to you."