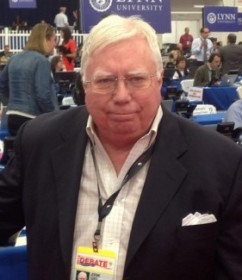 Jerome Corsi, the right-wing conspiracy theorist who helped put “birtherism” on the map, is yet again calling for President Obama to be impeached. This time he’s upset about immigration reform.

Back in September, Corsi and TeaParty.org put out a video demanding Obama be removed from office. The main pretext for removal was the president’s consideration of U.S. involvement in Syria, but he also listed abortion, LGBT rights, and immigration “amnesty” as impeachable outrages.

Now, Corsi and TeaParty.org have a new (albeit recycled) rationale for demanding the president’s impeachment: Obama and congressional Democrats’ plan to push for passage of comprehensive immigration reform, known in shorthand to Corsi and his audience as “amnesty.”

Corsi believes that Obama – who is frequently criticized by immigrant rights groups for overseeing record levels of deportations – aims to lavish taxpayer-funded benefits on undocumented immigrants with the ultimate aim of ceasing all enforcement of immigration laws:

Count out the taxpayer money Barack Obama intends to redistribute to illegal immigrants allowed to flood the country once Congress has voted a truly open border with Mexico:

To push this agenda forward, Attorney General Eric Holder has followed President Obama’s instructions to stop deportations of illegal immigrants as part of a grander policy of refusing to enforce immigration laws altogether.

What Corsi is referring to, of course, is a misleading report from the nativist Center for Immigration Studies – which was widely featured on Fox News – that purported to show that the administration had released a flood of criminals, willy-nilly, from immigration detention centers. The study was widely denounced for its misleading and false data, as well as its failure to include countervailing evidence, including the fact that deportations of undocumented immigrants with criminal records have nearly doubled since 2008. This is fairly typical of CIS studies, which have a long history of distorting and falsifying data in order to reach predetermined conclusions.

Meanwhile, expect Corsi to push ahead with his futile endeavor:

Tea Party Loyalists must let Congress know that we are serious and that we intend to push for impeachment if Barack Obama and Eric Holder continue flaunting the due enforcement of our immigration laws in their politically motivated push for amnesty.