With thousands of undocumented children amassing at the U.S. border, Robert Jones, Imperial Wizard of the Loyal White Knights of the Ku Klux Klan, doesn’t want amnesty. He wants "corpses" on the border.

Speaking to Al Jazeera America, Jones, in full Klan robes, warned that immigrant children crossing the border are a threat to a “white homeland” and simply one more way President Obama has “sold out the American people.”

“If we can’t turn them back, I think if we pop a couple of them off and leave their corpses laying at the border maybe they’ll see we’re serious about stopping immigration,” Jones said. 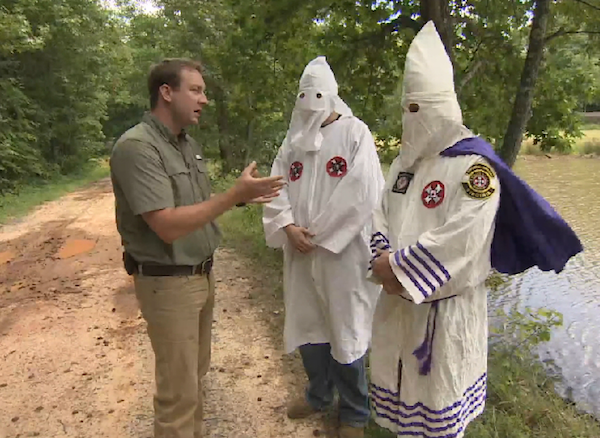 The situation at the border has intensified in recent weeks as violence has forced many families to help their children cross the border for safety –– an option available due to legislation signed by President George W. Bush that gave new protections to children entering the country by prohibiting them from being quickly sent back to their country of origin, the New York Times reported in early July. In response, militia members armed with assault rifles have once again begun border patrols, and groups like the Klan, long obsessed with a white homeland, have focused their hate toward the border once again.

The Klan has even established a telephone hotline with a pre-recorded message offering a list of supposed "black-on-white" crimes –– none of which have anything to do with the border. “Whites! It is time to arm yourself [sic],” the message begins. The Klan claims thousands are calling the hotline each day, including black people.

Of course, for an organization that claims, "If it ain’t white, it ain’t right,” such a relationship seems improbable at best.