Editor's Note: As of Sept. 5, U.S. Senator Rand Paul (R-Ky.) has confirmed he will participate in the Values Voter Summit.

Where have all the elected officials gone?

The Family Research Council’s (FRC) annual Values Voter Summit (VVS), set for the end of September, is fast approaching. But unlike prior years, very few high profile politicians have confirmed their participation.  And the current line up seems more extreme than ever.

Could this annual rite of passage, a must attend event for politicians courting social conservatives, be losing its luster?

The lineup is a far cry from last year, when 16 federal and state officials participated. Among them were GOP luminaries Paul Ryan (R-Wis.) and Rand Paul (R-Ky.). This time around, Ryan was until early August listed as an invited speaker, but his name has been pulled. A call to Ryan’s office to find out why was not answered.

The situation could of course change in the coming weeks.

Right now, there are a handful of elected officials listed as invited to the event, but not confirmed: U.S. Senator Rand Paul (R-Ky.), U.S. Senator Marco Rubio (R-Fla.), U.S. Senator Tim Scott (R-S.C.), Gov. Phil Bryan (R-Miss.) and U.S. Rep. Mark Meadows (R-N.C.). Calls and emails to their offices to determine if they will be speaking at VVS went unreturned.

Perhaps the lack of confirmed high-level speakers is related to FRC’s increasing extremism, as it wades deeper into a morass of anti-LGBT and anti-Muslim hatred. Just in the last year, FRC President Tony Perkins has said that gay rights advocates are “going to start rolling out the boxcars to start hauling off Christians,” predicted that anti-Christian violence will erupt in America, falsely claimed our military is instituting Shariah law and that it’s Obama’s fault people think he’s a Muslim.

In August, Perkins condemned the GOP’s plan to field three gay candidates in the upcoming congressional elections. In a rambling statement, he said the GOP was abandoning its “core principals.” “Of course,” he wrote, “now we know that it’s not just about getting ‘married,’ it’s about radically changing the curriculum of our schools — regardless of what parents want. It’s about radically changing the culture — through genderless bathroom ordinances and businesses being strong-armed.”

FRC’s allies are just as bad. 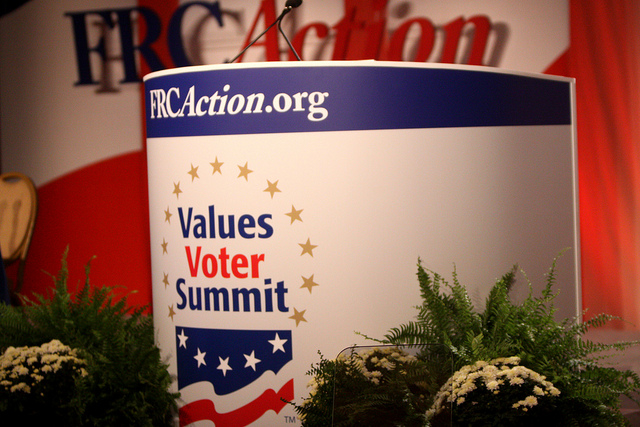 To get a sense of what kind of extremism is on tap for this year’s VVS, let’s take a look at some of the confirmed speakers on the preliminary schedule.

There’s Mat Staver of Liberty Counsel, who will talk about a so-called assault on parent’s rights. What Staver is best known for is vicious hyperbole. He has compared those who do not denounce gay marriage to those who were silent during the Nazi era about the Holocaust. He has said that gay marriage is the “beginning of the end of Western civilization” and that God will soon destroy America just as he did Sodom and Gomorrah. More ominously, Staver has defended Malawi’s law criminalizing homosexuality and said U.S. opposition to it is “immoral.”

A handful of the remaining confirmed speakers are similarly intemperate, and many have ties to the American Family Association (AFA), a co-sponsor of VVS that the SPLC lists as a hate group. AFA is sending Don Wildmon, its founder, Tim Wildmon, his son and current CEO, Buddy Smith, the executive vice president, and Ed Vitagliano, director of research. AFA is a hotbed of anti-LGBT, anti-Muslim and anti-immigrant extremism. Here are some of AFA’s greatest hits:

I could include a recent rant by Bryan Fischer about comedian Robin Williams being demon possessed, but you get the idea.

FRC will also have its own in house extremists on hand. Gen. Jerry Boykin, their executive vice president, will be there. He’s quite the Muslim-basher, having said the war on terror is a holy war against Islam, which he has labeled “evil” and “not a religion.” Boykin has also called for banning mosques in the U.S.

He’s not just wacky about Islam. Boykin has warned that President Obama’s health care reform will establish a private army of Brownshirts loyal just to him and that American Jews were misled into supporting Democratsby wrongly thinking Adolf Hitler was a right-wing extremist. He wants Jews to convert to Christianity.

Boykin, who ran the secretive Delta Force for some time, has also had some serious trouble with his former employer—the Army. In 2013, the Army issued a reprimand to Boykin for disclosing classified information in his book, Never Surrender: A Soldier’s Journey to the Crossroads of Faith and Freedom. The Army determined that the book disclosed “classified information concerning cover methods, counterterrorism/counter-proliferation operations, operational deployments, infiltration methods, pictures, and tactics, techniques and procedures that may compromise ongoing operations.”

Perkins will be on hand of course, to give a major talk. Among other things, Perkins has linked sexual assault, suicide and pedophilia to gay people, falsely contending that there is “a correlation between homosexuality and pedophilia.” He has further warned that anti-bullying effortsare “disgusting” and encourage “perversion” and that same-sex unions are part of a government “population control” plot.

Again, I could go on, but you get the picture.

And it’s not just the speakers who are worrisome.

The exhibitors are quite the hate line up as well. Two anti-LGBT hate groups, The World Congress of Families and Family Watch International, will have booths. They both have defended criminalization, meaning they are fine with throwing people in jail for engaging in consensual gay sex in places like Uganda. Summit Ministries will be there as well. That outfit once published a pamphlet, Special Report: AIDS, which proposed a number of means to “suppress” the outbreak, including possibly needing to “exile” all “active homosexuals” from America.

The anti-immigrant hate group Federation for American Immigration Reform (FAIR) is also an exhibitor. FAIR founder John Tanton has white nationalist beliefs and has written that to maintain American culture “a European-American majority” is required. FAIR President Dan Stein has complained that today’s immigrants are engaged in “competitive breeding” to diminish the power of the white majority. He has said that a 1965 immigration law that ended racial quotas was passed “to retaliate against Anglo-Saxon dominance.”

Given the groups and individuals involved in VVS, perhaps it is a good sign that so few elected officials are confirmed. Just this past month, politicians pulled out of a World Congress of Families event in Australia and the Federal Senate there formally condemned WCF for “spreading homophobic and sexist messages around the world.”

Perhaps the tide is finally turning, and elected officials will no longer sanction with their presence such obvious hatred against the LGBT and other minority communities.