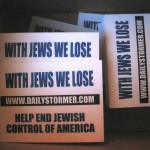 Banking on far-flung publicity surrounding a Kentucky political candidate’s campaign slogan, “With Jews We Lose,” the anti-Semitic website Daily Stormer has announced plans to distribute flyers with the phrase in New Hampshire ahead of Election Day.

The website is calling the plan an “anti-Jew propaganda offensive” with plans to buy larger signs with a variety of different messages “exposing the Jewish power structure that is destroying America.”

“Even though the Internet is an effective way to spread the message about Jewish control of America, it is also important that we spread this message in the real world,” the Daily Stormer said. About 150 signs will be distributed in southern New Hampshire in the coming weeks “near Jewish institutions and memorials, schools and a variety of other places that will hopefully get people’s attention,” the website reported.

It is not entirely clear why Daily Stormer is targeting New Hampshire. A request for comment were not returned.

The slogan has been popularized by Robert Ransdell, former regional coordinator for the neo-Nazi National Alliance (NA) in Cincinnati, Ohio, during his U.S. Senate run. He announced his candidacy on the hate forums Stormfront and Vanguard News Network (VNN) in late May.

The Daily Stormer claims to have taken on the initiative as a way to further spread the message. Andrew Anglin, who runs the site, wrote that by pushing Ransdell’s message, “we will eventually tear down the fear people have of discussing issues that have been deemed ‘politically incorrect’ by the Jewish run media.”

Anglin added, “Most importantly, this type of thing is fun and I guarantee that you’ll have a good time doing it.”