A hate crime charge is being added to others filed against an Illinois man who was arrested last week after he allegedly targeted a synagogue with extensive vandalism and anti-Semitic graffiti. 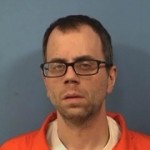 White was arrested on Oct. 21 after police responded to a report of a man driving a vehicle recklessly, damaging landscaping on the grounds of Etz Chaim Synagogue in Lombard, Ill. Moments earlier, seven windows at the synagogue had been broken and graffiti was written on an exterior wall.

DuPage County Assistant State's Attorney Enza LaMonica told a judge on Friday that the suspect left a hatchet, a machete, an ax and a knife at the front entrance of the synagogue, the Chicago Tribune reported. Inside the suspect’s car, police found gun targets, rat poison, brass knuckles and a hateful note, the prosecutor told the court.

After White was arrested, police served a search warrant at his home in Westmont, Ill., where he lives with his mother. She told authorities her son, who as a record of drug arrests, has suffered from mental illness, the newspaper reported.

In the home, police located and seized “thousands of rounds of ammunition, and recovered a rifle, shotgun and four handguns.”

“DuPage County is built on the strength of our communities, and an attack on a religious institution is considered an attack against the entire community,” the prosecutor said.

Rabbi Andrea Cosnowsky issued a statement saying Congregation Etz Chaim “condemns the recent act of vandalism on our congregational building and the apparent bigotry behind it.”

Other places of worship are offering support.

The Chicago Tribune reported that Sabet Siddiqui, a representative of Masjid-Ul-Haqq Mosque in Lombard, said: “We stand together with Congregation Etz Chaim with respect and condemn these acts of hatred and antagonism against any religion.”

Eileen Maggiore, a pastoral associate at Christ the King Church in Lombard, expressed sorrow of such hate crimes. “It’s a terrible shame that this still happens in our world. We are grateful no one was hurt and we stand in solidarity with our neighbors at Congregation Etz Chaim,” she said.