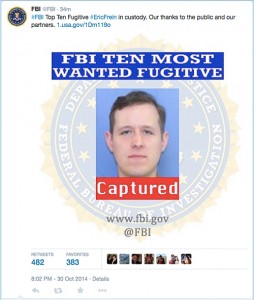 Eric Matthew Frein, the 31-year-old antigovernment survivalist and accused cop-killer, was arraigned today on murder and other charges in Hawley, Pa., after a 48-day massive manhunt in rural Pennsylvania ended yesterday with his capture.

Frein was restrained in the Pike County District Courtroom in the very handcuffs once used by the Pennsylvania state trooper he is accused of shooting.  Authorities slapped those cuffs on him immediately after his arrest and drove him away in the slain officer’s car to the state police barracks where the ambush occurred on Sept. 12.

As Frein was led to the courtroom today--his hair slicked back with a bloody cut on his nose--a crowd of about 150 gathered and shouted, “You're a coward,” and “Rot in hell,” the Philadelphia Inquirer reported.

With Frein's hands bound in the handcuffs that once belonged to slain State Police Cpl. Bryon Dickson, another state trooper turned the pages of the murder complaint, which Frein appeared to read intensely, the newspaper reported.

Frein, apparently caught off guard by deputy U.S. marshals, was arrested without a shot fired  near an abandoned hangar at Birchwood-Pocono Airpark in Monroe County, Pa., according to several media accounts.

The elusive fugitive, placed on the FBI’s Top 10 Most Wanted List last month, was the object of one of the most intense manhunts in modern times--an undertaking now estimated to have cost $10 million. The search for the suspect draped a cloak of fear across assorted Pocono communities resulting in the closure of schools and the cancellation of many activities, including hunting and Halloween trick-or-treating.

While his motivation isn’t clear, Frein was a skilled survivalist and war re-enactment buff accused of harboring a deep-seated hatred of police.

For the past seven weeks, more than 1,000 law enforcement officers combed the dense woods of Pennsylvania’s Pocono Mountains for the Frein following the ambush shooting of Cpl. Byron Dickson, 38, and the wounding of Trooper Alex Douglass, 31, at the Pennsylvania State Police Blooming Grove Barracks in Pike County.

Pike County District Attorney Raymond Tonkin told reporters late Thursday that Frein would be charged with murder, homicide of a law enforcement officer, attempted murder and possession of weapons of mass destruction. That latter charge apparently relates to assembled pipe bombs found during the manhunt. The prosecutor also said he would seek the death penalty, the Philadelphia Inquirer reported.

Frein’s capture came just before dark Thursday, when the federal marshals spotted a man matching the fugitive’s description in a field, appearing to be unarmed, yards from the hangar, the Express-Times newspaper reported.

“They ordered him to surrender, to get down on his knees and raise his hands, which he did,” Pennsylvania State Police Commissioner Frank Noonan told the newspaper.

There were other reports, later confirmed by authorities, that a rifle and a handgun were found in the hanger where Frein apparently was seeking refuge from cold and wet fall weather. Frein appeared to be in good condition, not requiring any medical attention, Noonan told the Express-Times.

“He looked fairly healthy, healthier than I would have expected,” he said.