While most militia organizers in the United States focus their energies on combating what they see as domestic enemies — particularly the federal government and other alleged participants in a nefarious “New World Order” scheme to enslave Americans — in recent weeks there have been a handful of so-called “Patriots” who have decided it’s more worthwhile to focus their attention overseas. They say they are organizing to fight Islamic State (ISIS) radicals in the Middle East.

The men behind of these efforts — one based in Arkansas, one in Florida — claim to be forming armed squads of militiamen to fly into ISIS hotspots in Iraq and Syria and combat the enemy on the ground. Neither, however, appear to be anything more than a fundraising operation built around pure fantasies.

Their grandiose claims verge on the utterly ridiculous. One promoter, a man who will only identify himself by the alias Swandog, says he’s building a multi-billion dollar operation, will soon have a force of 7,000 specialized military and intelligence operators, and will pay each of them more than $100,000. There is not a shred of known evidence to suggest there’s anything real behind the swaggering talk.

Swandog, a "commander" so brave he refuses to identify himself by name, described for a credulous local Arkansas TV news report his plans for assembling a multi-billion-dollar effort to combat ISIS with volunteers to his “private militia.” With a straight face, the TV station asserted that Swandog “reportedly already has men on the ground in the Middle East” and has raised “tens of millions of dollars.” It even presented a local “expert” who said the effort “seems to be genuine” and could work. In the report, the designated expert, a local criminology professor and former Green Beret, offers no evidence at all for his belief.

“Team Swandog currently numbers just under 500. We are recruiting actively," Swandog told KTHV-TV reporters from nearby Little Rock. "Right now we do have six advance teams in the theater of operation; they're in non-combat roles just doing prep work for our arrival."

He told the reporter that he is recruiting former Special Operations and intelligence personnel, as well as snipers, medics and support staff. He also claimed that he was offering them a base annual salary of $120,000. 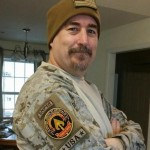 Swandog makes some big claims about money: "Most of our funding comes from businesses and churches, we don't do very much individual fundraising at all. Depending on how fast we want to do this operation, we can do it in the course of two years on about $10 billion, now that's going to be a fraction of the cost of a full-fledged military operation."

Swandog could be describing himself. After a little sleuthing, Hatewatch learned that Swandog’s real name is David Paul Brennan, and he is a Searcy, Ark., man who has at various times in his career has described himself as a “professional badass” and boasted about his supposedly high intelligence-test scores, but who has in fact never served in the military, and has never worked for any intelligence-gathering service.

Brennan acknowledged all this in an interview with Hatewatch. “I do not have a military background,” he said. “About all I’m willing to put out there is having ties to the intelligence community.”

He claimed that he actually represents a team of more than two dozen people who have worked together to formulate a citizens’ strategy for defeating ISIS overseas. “We kind of all met a few years back. We didn’t even know each other until a few years ago; we met at a tattoo shop — the core group — and then kind of added to our little group since then. And when we noticed what was going on with the Islamic State, and we started to research it and realize that everything America does plays into exactly what it is that radicalizes these people and makes more of them, we felt like we needed to try to do something about it.”

Brennan claimed that the group has so far assembled more than $40 million in support from his network, and has already deployed some of its team into the “theater of operations” in the Middle East.

“We are putting together an actual combatant force, which is going to be 3,000 strong, and we’ll have 2,000 in reserve here plus a support element, for a total of 7,000 paid positions for us. And when you get an operation that large, it does take a lot of funding.

“We have raised a considerable amount of money that is funding our advance teams that are in the theater now. And they’re pretty well getting the lay of the land for us. … It’s a pretty robust human-intelligence operation. And that is ongoing. That has funding through the end of April.”

Brennan said these advance-team members are all American citizens. “Most of them come from either the intelligence community, whether it’s defense intelligence agencies, Central Intelligence Agency, or one of the other agencies, or they come from a private security background,” he told Hatewatch.Brennan has created a “Team Swandog” website that lays out their strategy. In a video posted to the site, he described the grand strategy in greater detail.

“We are rising up to destroy the Islamic State and eradicate radical fundamentalist Islam from the face of the planet and we have a strategy to do it with a relative handful of guys compared to a full-scale military invasion. We're going to do it with a strategy of unconventional warfare, guerrilla tactics," he boasts.

Calling the fight against ISIS a “religious war,” he continued: “I'm asking you to help Team Swandog on behalf of the United States of America, on behalf of a people who have lost faith in their government to protect them. I'm asking you to help us destroy the Islamic State now. Sooner rather than later, and eradicate this evil ideology of radical fundamentalist Islam from the face of the earth.”

He made a plea for volunteers, too: “Even if you're just a good old boy who happens to be really good with a high-power rifle, I need you. I can put you to work as a sniper, killing these Islamic State douchebags.” 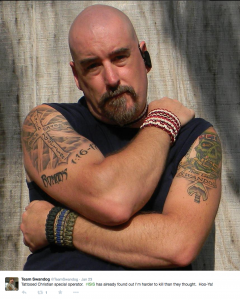 Brennan explains that he calls his group a “militia” in order to avoid being designated as mercenaries, who he says have no protections under the Geneva Conventions. “We’re not a militia like the militia groups you guys have experience with. We’re not antigovernment,” he says. “I’m not a conspiracy theorist. I’m just a guy that has been around the block and has a lot of connections. We just couldn’t see doing nothing about the Islamic State.”

The second effort to organize a team of American veterans to fight ISIS overseas originates with a Jacksonville, Fla., man named Sean Rowe. His organization, called Veterans Against ISIS, was featured in similar news stories from WTLV-TV and WPXI-TV, in which Rowe described his strategy to form a team of veterans to combat the spread of Islamic radicalism.

“We're tired of seeing what’s going on, and it doesn’t look like anything is being done,” he said. “These guys are slaughtering and beheading people. We’re going over there to stop that; it’s not about the money.”

Unlike Brennan, Rowe is an actual Army veteran of eight years. He started up a website and a Facebook page for his group, asking veterans with combat experience to step up and join his group.

Yet another group that ostensibly seeks to defend America from ISIS attacks also calls itself Veterans Against ISIS; it had organized before Rowe, and is now considering legal action to trademark the name. "We are here in case of a domestic threat; we're not a recruiting agency sending able bodies to Iraq," said the group's co-founder Andrew Brian, another Army vet.

Rowe said he sees no issue in using the same name: “We're all Veterans Against ISIS, so it shouldn't be a problem," he told the Army Times.

Rowe is also more openly bigoted in his recruitment efforts. His Facebook posts have featured memes attacking the Koran as fakery, suggesting that Muslims have sex with goats, and calling President Obama the “worst president in the history of this great country.”

Rowe also tried putting together a GoFundMe site to raise money for his team. However, GoFundMe recently took down the page after it collected only $265 from various donors.

Since then, Rowe has apparently retreated in his strategy. A recent Facebook post explained that he was downshifting his grand plans: “The role of this organization has shifted to focus primarily on the uniting and coordination of veterans for a defensive deployment in support of the Christians in Syria against ISIS, and, secondarily, on the raising of funds for necessities. Therefore, at this time we must decline any interest from veterans wishing to deploy, unless they are able to fund their own travel over there.”

On the team website, he now lists eight would-be participants by their aliases.

In contrast, Brennan claims to be having real success recruiting participants. “Right now, we’ve got an even 90 people signed up for this,” he told Hatewatch. “It’s not a huge number, by any stretch of the imagination. But these are people who have military experience, a lot of them are special operations, and they talk to me and they understand that this is not a situation where everything is just decided by me and that’s it. That everybody really has input, we’ve got an open-door policy.”

“You know, nothing ever happened without people starting something. Nothing great ever started out great. Everything great starts out small. And that’s where we’re are, in that fairly small stage.”