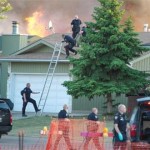 One police officer was killed and a second wounded in a fiery standoff when officers tried to serve a criminal warrant at the Edmonton, Alberta, home of a man believed to be an antigovernment “sovereign citizen."

After the Monday shooting, the home burst into flames and burned to the ground, apparently with the suspect, Norman Walter Raddatz, 42, still inside. Police found one body in the burned ruins.

The second officer, who was wounded in the lower back, was patrol Sgt. Jason Harley, 38, a 15-year member of the EPS, the National Post reported. The police chief said Harley survived because of a bulletproof vest.

The two officers went to the residence in an apparent attempt to arrest Raddatz, whose age was not immediately available, on a criminal harassment warrant. Knecht said shots were fired from inside the home as the officers attempted to enter the residence.

The arrest warrant naming Raddatz stemmed from an investigation of “extreme” online hatred and bullying of an Edmonton family, but other details weren’t immediately available, according to media reports.

The home where the shooting occurred is in foreclosure, so the owner faced eviction, according to news reports. Real estate advertisements say the residence was occupied but with “no access” and being sold as-is.

The police chief didn’t elaborate when asked about the shooting suspect’s ties to the sovereign citizen movement, sometimes called “Freeman on the Land” in Canada. Knecht promised additional details at a later briefing.

Woodall, who joined the Edmonton police after immigrating from Great Britain, was married and the father of two children. He is the first Edmonton Police Service officer killed in the line of duty in Edmonton in 25 years, according to various media outlets. The last officer was Ezio Faraone, fatally shot while chasing bank robbery suspects

In the last 15 years, sovereign citizen extremists have killed seven law enforcement officers in the United States. Several other police officers have been injured in standoffs involving sovereign citizens, who generally believe that government has no control over them. On occasion, the antigovernment extremists file seemingly harmless paperwork and court documents, but their encounters with police and government officials can escalate into deadly violence very quickly.

The FBI has labeled the sovereign citizen movement a domestic terrorism threat in the United States.

In 2010, two West Memphis, Ark., police officers were fatally shot when they stopped sovereign citizen extremists Jerry Kane and his 16-year-old son Joseph. During the “routine traffic stop,” the teenager jumped out of his father’s vehicle with an AK-47 assault rifle, fatally shooting both officers.