Two racist skinheads are heading to prison for murdering an associate who, they say, violated the skinhead code.

Two members of a white supremacist gang are going to prison -- one of them for life -- for their roles in the 2013 stabbing murder of a fellow racist in Tacoma, Wash.

The defendants and the victim were members of Aryan Skins Kindred (ASK), now believed to be one of the largest prison-based white supremacy gangs in Washington state, authorities say. 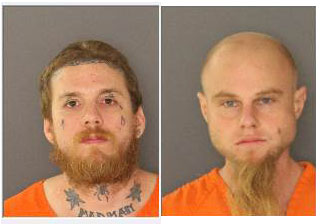 Eric Michael Elliser, 35, was sentenced Friday in Pierce County Superior Court to life in prison without the possibility of parole under the state’s three strikes law. Co-defendant Shanne McKittrick, 33, was sentenced to 24 years, 11 months.

Both were convicted by a jury in April in the November 2013 stabbing death of Derek Wagner, 27, on a Tacoma street during a dispute involving an acquaintance’s wife.

Deputy prosecutors James Schacht and Angelica Williams argued at trial that McKittrick and Elliser were upholding a skinhead code when they attacked Wagner, who also had skinhead ties, the Tacoma News Tribune reported.

Wagner had shown disrespect to another white supremacist by having an affair with his wife, a transgression punishable by violence under the skinheads’ code of conduct, the prosecutors argued.

At the sentencing hearing, Superior Court Judge Jack Nevin called it “a sad day” for all involved and said the defendants’ involvement the white supremacy movement and its “culture of violence” led them astray.

“It didn’t have to happen,” the judge told the convicted killers.

A third defendant, Mark Michael Stredicke, 39, stood trial with McKittrick and Elliser, but was acquitted by the jury. He was not at the scene of the murder, prosecutors said, but had spoken on the telephone with one or more of the defendants.