The first arrest related to the illegal occupation of an Oregon wildlife refuge is an Oregon man with sovereign citizen-leanings and a lengthy, unsuccessful record of challenging the federal government and its agencies in the Pacific Northwest. 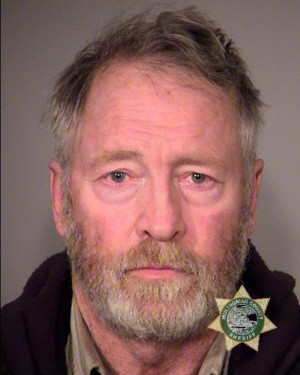 Kenneth W. Medenbach was arrested Friday –– the 14th day of the takeover –– in a Safeway parking lot in Burns, Ore., after he was caught driving a U.S. Fish & Wildlife pickup truck that authorities said was stolen from the Malheur National Wildlife Refuge.

The federal agency’s logo on the vehicle had been covered with a new one saying the truck was owned by the “Harney County Resource Center," the name antigovernment activists and militia have given the federal refuge after their illegal occupation began on Jan. 2.

Oregon State Police officers arrested Medenbach on suspicion of unauthorized use of a motor vehicle, a felony punishable by up to five years in prison. Officers did not book him into the Harney County Jail, but instead took him to Bend, Ore., and booked him in the Deschutes County Jail under a $10,000 bail, the Bend Bulletin reported.

The charge appears to put Medenbach in violation of terms of his recent release from custody on federal charges filed in mid-November in the District of Oregon. Those charges allege Medenbach illegally camped for months on Bureau of Land Management land near Galice, in southern Oregon, where antigovernment protesters, including members of Oath Keepers, blocked BLM efforts to enforce an order halt work at the Sugar Pine gold mine, court documents say.

Medenbach was released without bond on those federal charges, which are still pending, under the conditions that he not “reside, camp on, occupy or leave any property on federal lands,” court documents say.

Not only did Medenbach join Ammon Bundy and others in the illegal takeover of the Malheur refuge headquarters complex, 30 miles south of Burns, it also appears he prepared some of his own legal documents while staying at the government complex.

The federal charges against him should be dismissed, Medenbach wrote, because the federal court system and its judges have no jurisdiction over him –– the same type of argument and philosophy advanced by antigovernment "sovereign citizens." He acknowledges in his filing that he mailed his motion to dismiss the charges from Burns, Ore., even though he wasn’t supposed to leave his home in Crescent, Ore.

In previous court filings, Medenbach wrote his name in capital letters – another hallmark of sovereign citizens.

Medenbach’s fight with the federal government over camping on federal property for extended periods of time goes back to the mid-1990s.  He was charged and convicted in 1996 for illegally camping for more than three weeks in the Gifford Pinchot National Forest in southwestern Washington.

Forest Service agents who arrested Medenbach then discovered he had almost 100 pounds of explosive ammonium sulfate, a pellet gun, and what appeared to be a hand grenade with trip wires at his illegal camp site. Agents also testified Medenbach attempted to intimidate them by “threatening armed resistance” and making references to Ruby Ridge and Waco, both standoffs in the 1990s that pitted federal agents against armed citizens accused of breaking the law.

He appealed that conviction on the grounds that federal agencies can’t bar U.S. citizens from unlimited use or occupation of federal lands, but the 9th U.S. Circuit Court of Appeals didn’t buy his argument.

Medenbach also argued that the First Amendment allowed him to intimidate federal agents and make references to Ruby Ridge and Waco.

In what appears to be déjà vu for the occupiers at Malheur, Medenbach argued that “some intimidation may be justified where the government has overstepped its bounds, whether at Ruby Ridge and Waco, or in the present case,” the appeals court wrote.

Put in context of his arrest, his references to intimidation tactics and the incidents at Ruby Ridge and Waco “do not appear to be ‘mere advocacy’ of unpopular political beliefs,” the appeals court said, but “evince the type of ‘incitement to imminent lawless action’” that isn’t deemed legal under the First Amendment.

Medenbach also argued that the judge in the 1996 case lacked authority to determine him to be a flight risk or danger to the community. The federal appeals court, however, ruled that the “evidence of Medenbach's use of various intimidation tactics clearly supports a finding of actual dangerousness.”

A federal judge correctly determined that Medenbach could not be expected to comply with court-ordered conditions of release because of his attempt to walk out of the courtroom without the judge’s permission, his denial of the federal judiciary's legitimacy, and his apparent violation of felony probation in Oregon, the appeals court held.