Cliven Bundy, the Nevada rancher who’s the spearhead of an angry antigovernment movement, has called on four armed occupiers to remain at the Malheur National Wildlife Refuge in eastern Oregon.

The patriarch of the Bundy clan sent certified letters yesterday disagreeing with his imprisoned son, Ammon Bundy, who began calling for occupiers to stand down and go home almost immediately after he and seven others were arrested Jan. 26 on federal conspiracy charges.

Four occupiers remain at the refuge today – Day 32 in the standoff. Various media reports say that cell phone and Internet service has been cut off to the remaining occupiers who still can talk with negotiators on an FBI-supplied phone.

The standoff began Jan. 2 when Ammon and Ryan Bundy and an entourage of supporters went to Harney County, Ore., to stage a demonstration and march in Burns, Ore., in support of ranchers Dwight and Steve Hammond. Like the Bundys, the Hammonds grazed their cattle on U.S. Bureau of Land Management land near the wildlife refuge. Despite the Bundys intervention, the Hammonds reported to federal prison on Jan. 4, two days after the illegal occupation of the wildlife refuge began. The Hammonds are serving time for arson on federal lands.

Now, Cliven Bundy has sent letters to Harney County Sheriff Dave Ward, Oregon Gov. Kate Brown and President Obama, calling for the removal of FBI agents who encircled the refuge and established perimeter control points after last week’s arrests. The FBI’s Hostage Rescue Team reportedly is involved in the standoff along with the bureau’s specially trained negotiators who are working around the clock to end the stalemate peacefully.

“We the People of Harney County and also We the People of the citizens of the United States DO GIVE NOTICE THAT WE WILL RETAIN POSSESSION OF THE HARNEY COUNTY RESOURCE CENTER. (Malhaur [sic] National Wildlife Refuge),” Cliven Bundy’s letter said.

The occupiers renamed the national wildlife refuge the county “Resource Center” as part of their attempt to strip federal control of the bird sanctuary and turn the land over to local county officials who say they don’t want and can’t afford the operation.

“Remove all federal and state policing agents out of Harney County,” Cliven Bundy’s letter continued. “Place a Harney County sheriff guard post at the entrance road of the Harney County Resource Center stopping all from entering or exiting, for a time.”

As word of Cliven Bundy’s statement was made public Monday, an estimated 500 people gathered at the Harney County Courthouse in Burns in a demonstration urging the occupiers to go home.

“I'm really sad this has happened in my community,” Sheriff Dave Ward told the Oregonian as he watched the dueling demonstrations. Many of the demonstrators held signs supporting the sheriff. “I absolutely love the community members and appreciate their support.” 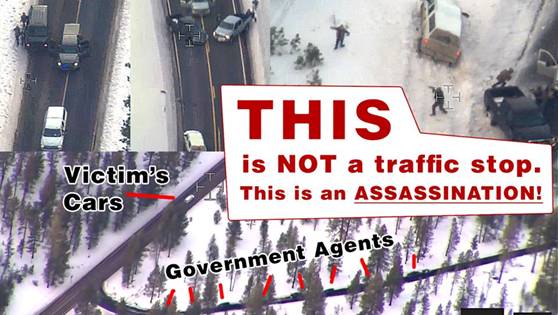 At least one sign made reference to the fatal shooting of occupier Robert LaVoy Finicum. He was fatally shot during the Jan. 26 arrests that occurred as he and Ammon and Ryan Bundy – Cliven’s sons – attempted to drive from the refuge to attend a community rally in John Day, Ore., where that county’s sheriff is sympathetic to their cause. Finicum’s funeral is set for Friday at a Latter Day Saints church in Kanab, Utah, where a large turnout is expected.

Cliven Bundy – on a Facebook page called “Bundy Ranch” has said Finicum, his friend and supporter from an April 2014 standoff in Bunkerville, Nev., was murdered by federal agents.

“This is NOT a traffic stop. This is an ASSASSINATION!” the page said in one post.

In another post yesterday, the Bundy page said, “We do not expect this Facebook page to remain. Facebook is actively removing our posts and today we were threatened with termination of this page by Facebook."