A 61-year ex-Marine who has been co-chair of the Veterans for Trump campaign in New Hampshire is among three additional defendants named in a superseding indictment containing new criminal charges for their roles in an armed 2014 standoff with federal agents at the Bundy Ranch in Bunkerville, Nev. 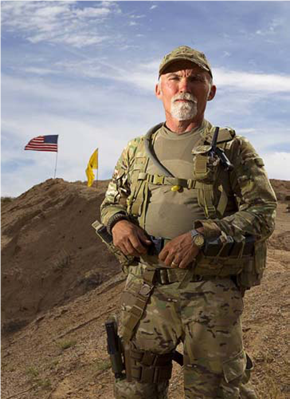 Gerald A. “Jerry” DeLemus, who has worked as a self-employed carpenter and been a Tea Party activist, was arrested without incident Thursday at his home in Rochester, N.H., by an FBI tactical team.

After a court appearance, he was expected to be taken by federal marshals to the District of Nevada where the charges are filed.

His wife, state Rep. Susan DeLemus, (R-Rochester), spread word of her husband’s arrest, prompting the former chairman of the state’s Republican Party to issue a public call for all New Hampshire “patriots to come together ASAP … to protest this tyranny in the most visible way possible.”

Gerald DeLemus is described in court documents as a key leader and militia “base commander” who provided security at Cliven Bundy’s ranch in 2014. They also disclose that he traveled to Burns, Ore., in January when Bundy’s sons, Ammon and Ryan Bundy, led the takeover of the Malheur National Wildlife Refuge.

“While claiming to the FBI that his avowed purpose was to persuade the occupiers of the [Malheur refuge] to leave, DeLemus remained in close telephone contact with Cliven Bundy, Ammon Bundy, Ryan Payne, and Brian Cavalier from November 2015, the beginning of the conspiracy according to the indictment in that case and onward,” court documents say.

While DeLemus is not charged at this point with conspiracy for his involvement in the Malheur takeover, he was charged in Nevada with nine federal felonies, including assault on a federal officer; threatening a federal law enforcement officer, obstruction of justice, interference with interstate commerce by extortion and use of a firearm in relation to a crime of violence and conspiracy for his alleged role in the landmark April 2014 standoff at the Bundy Ranch.

Cliven Bundy, his sons Ammon and Ryan, along with Ryan Payne and Peter Santilli were indicted last month in Nevada for their involvement in the 2014 standoff. Besides DeLemus, the new indictment adds Blaine Cooper and Brian D. Cavalier as defendants in the Nevada criminal case.

DeLemus is described in court documents as a 61-year old Marine Corps veteran residing in Rochester, N.H., who is married with children and has no known criminal history. Court documents do not mention DeLemus’ connection with the Trump presidential campaign.

In a press release last July, the Trump campaign announced formation of the “Veterans for Trump” coalition in New Hampshire, naming DeLemus as a co-chairman, along with New Hamsphire state Reps. Werner Horn and Dan Tamburello.

Court documents say the criminal charges against DeLemus are grounded not only “in violence and lawless acts, but also in his complete disregard for the rule of law.”

“DeLemus is unapologetic for his role in leading an armed occupation of the Bunkerville area to prevent federal agents from enforcing a court order merely because he disagrees with the order,” a federal court document says.

Prosecutors asked for his detention without bond, saying DeLemus was a flight risk and danger to the community. There is no evidence, they argued, “to suggest that DeLemus will not answer another call to arms should any law enforcement action be taken against the cattle or other co-conspirators.”

“This is especially true given his obvious pride in having taken part in the first armed confrontation with law enforcement,” the motion said.

DeLemus read media accounts of the Bundy Ranch standoff in 2014 and drove 40 hours straight from New Hampshire to Nevada, stopping only to sight his firearms in the Utah desert, court documents filed Thursday say.

He later publicly bragged about his role in the Nevada standoff, but in fact he arrived too late to take part in armed assault of federal agents, court documents say. Instead, DeLemus remained at the Bundy Ranch for three weeks afterwards and was in charge of “Camp Liberty,” one of the militia camps where armed men protected Bundy and his co-conspirators.

“He quickly became a leader and organizer of gunmen on the ground at Bundy Ranch, the ‘base commander’ and a recruiter of other armed gunmen,” court documents allege. 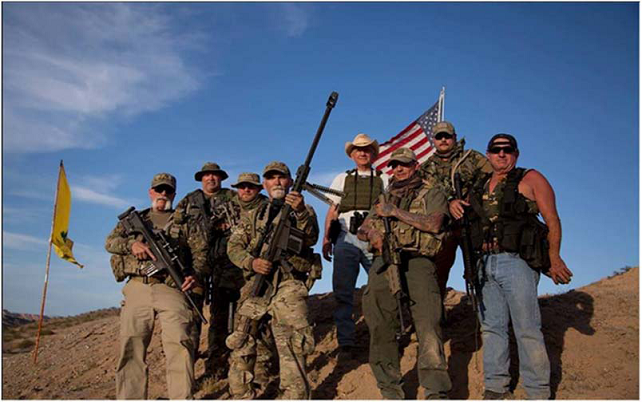 At one point in the 2014 events, DeLemus was photographed holding a 50-caliber machine gun which was part of the arsenal of firearms various militia groups and individuals used to point at federal agents and eventually force them to release Bundy’s impounded cattle and retreat. The photo of DeLemus posing with the military weapon was made part of the court record Thursday when charging documents were filed. That photo is part of a growing mountain of evidence the FBI has been collecting over the past two years.

“The most damning evidence against DeLemus is his free and unrepentant statements that he has given to interviewers for public dissemination,” the court documents say.

In a video interview with Stewart Rhodes, the founder of Oath Keepers, DeLemus described how he recruited other gunmen to travel to the Bundy Ranch. He agreed with Rhodes’ description that the “Battle of Bunkerville” was “sacred ground” because Americans stood up “because even though we didn’t have to fight, we faced them off.”

In the video DeLemus said, “We will stand and we will fight and we will die if the government tries to oppress the Bundys.”