A federal judge in North Dakota followed prosecutors’ recommendations in sentencing a Minnesota man to 15 years in prison Tuesday for using a Molotov cocktail to burn down a Somali café in Grand Forks, N.D., late last year

The firebomb - thrown through a window at 2 a.m. on Dec. 8 by a masked man - destroyed the Juba Café, a popular gathering spot for Somalis, and damaged adjoining businesses, causing an estimated $250,000 in damage, authorities said.

Matthew William Gust, 26, of East Grand Forks, Minn., was arrested by the FBI and sheriff’s deputies in Fosston, Minn., six days after the firebombing. 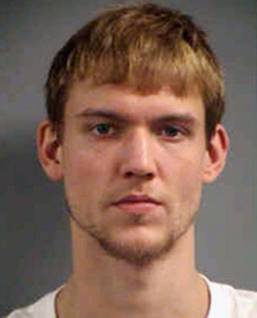 Tips from a family member, blood droplets left at the scene, surveillance video and the recovery of a mask believed used by the arsonist led to the suspect’s arrest, court documents indicate.

The hate crime investigation by the FBI “revealed that Gust had a strong dislike for Somalis and did not want them living in the Grand Forks area,” according to court documents filed by prosecutors.

“When encountering Somalis, [Gust] would frequently get angry and describe them using the word ‘n-----.’ He told friends and co-workers that he thought Somalis ‘needed to go away’ and that he would ‘do something’ about it or ‘take care of it’ or ‘kick all Somalians’ asses,’” the documents say.

Defense attorney Theodore Sandberg told the court that Gust was not a racist or white supremacist, but had developed an animus toward Somalis after he was robbed at gunpoint last year while working with a family member at a sandwich shop, shortly after he was released from prison. Suspects in that crime have not been identified or arrested.

“After a night of drinking, and a day after ingesting meth, Gust created the Molotov cocktail and decided he would settle the score with the robbers by damaging their national associates’ gathering place,” Sandberg wrote in a sentencing memorandum.

The defense attorney said that explanation was not an excuse, nor a mitigating factor, “but the racial component is not as clear-cut or as simplistic as some of the narratives that have been pushed by others (outside of this case) when considering this crime.”

U.S. District Judge Ralph Erickson told Gust that his decision to firebomb the Somali cafe because of the robbery “was silly since it's not even clear if [those suspects] were Somali,” The Associated Press reported.

“If you had been robbed by three Norwegian dudes, would you attack the Sons of Norway hall?” the judge asked Gust.

Gust pleaded guilty in May to malicious use of explosive material and interference with a federally protected activity. His defense attorney said Gust’s admission of guilty “clearly shows” that he the defendant “knows what he did was wrong” and how much hurt he caused.

Dana Mulhauser, of the Justice Department’s Civil Rights Division, said in a sentencing memorandum that Gust’s Molotov cocktail – gasoline poured into a 40-ounce beer bottle – was hurled “into the nerve center of Grand Forks’ small Somali community – the place where people could share a meal, eat familiar food, and socialize.”

The restaurant owners frequently worked past midnight to prepare food for the following day, “so the lack of injuries on this day was a matter of luck,” the prosecutor said. “In carrying out this crime, [Gust] used the incendiary device in a way calculated to cause massive disruption and fear, meriting a significant upward departure.”

The Justice Department prosecutor and Christopher C. Myers, the U.S. Attorney for North Dakota, told sentencing Judge Ralph Erickson that a 15-year sentence was warranted as a deterrence to demonstrate … that violence on the basis of national origin is not tolerated by this court or by the federal system of justice.”

The prosecutors recommended Gust be ordered to pay $268,927 in restitution. The judge said he would take that under advisement and issue a restitution order in days to come.