Like most Major League Baseball teams, the Seattle Mariners are accustomed to dealing with the slings and arrows of player-related misfortunes over the course of a season. But being targeted by a notorious neo-Nazi hacker and an army of Alt-Right activists angry over a player’s suspension is pretty much a brand-new curveball.

“It’s our duty as white Americans to stand up for a fellow soldier under ZOG’s attack,” wrote the notorious white-supremacist hacker Weev, in a post earlier this week at the neo-Nazi site The Daily Stormer that called for all fellow “alt-righters” to descend en masse upon the Mariners organization in social media, as well as by email and phone. “We can no longer stand silent while good white men lose their incomes and futures to the Jew mob.” ("ZOG" is the acronym white supremacists use to refer to "Zionist Occupied Government.")

The object of their ire was the Mariners’ decision on Sept. 23 to suspend backup catcher Steve Clevenger, without pay, for the remaining two weeks of the season after he posted a couple of racially incendiary comments (since removed) on Twitter attacking Black Lives Matter and President Obama. 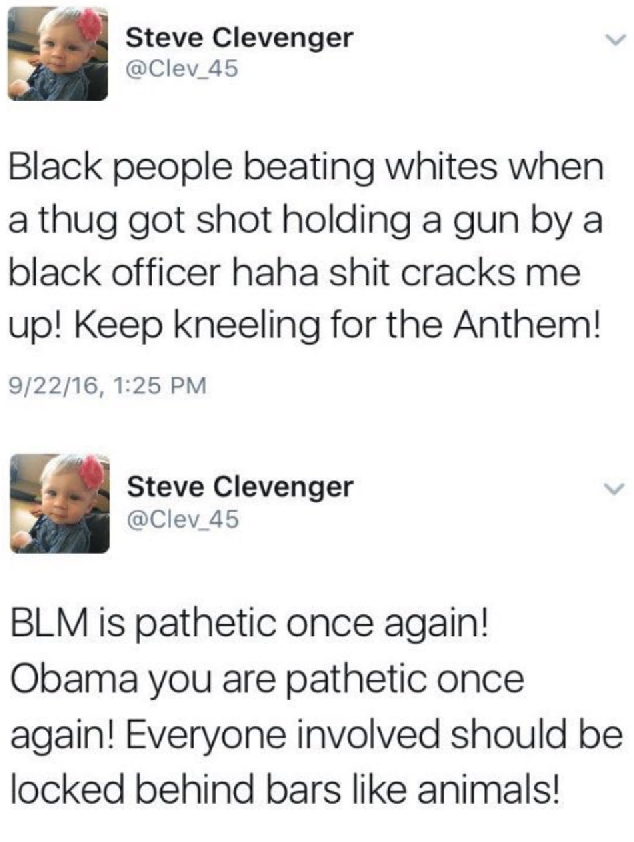 Steve Clevenger's tweets created a storm of controversy for the Mariners.

Responding to news reports of black protesters rioting in Charlotte, N.C., after a police shooting of a black man there, Clevenger wrote: “Black people beating whites when a thug got shot holding a gun by a black officer haha shit cracks me up! Keep kneeling for the Anthem!”

When the tweets began attracting attention, Clevenger quickly deleted them, and shortly afterward posted a public apology: First and foremost I would like to apologize to the Seattle Mariners, my teammates, my family and the fans of our great game for the distraction my tweets on my personal twitter page caused when they went public earlier today. I am sickened by the idea that anyone would think of me in racist terms. My tweets were reactionary to the events I saw on the news and were worded beyond poorly at best and I can see how and why someone could read into my tweets far more deeply than how I actually feel.”

The next day, the Mariners pulled the plug. Clevenger was on the team’s 60-day disabled list and was not expected to play again this season, but the team announced his suspension without pay after the tweets: “As soon as we became aware of the tweets posted by Steve yesterday we began to examine all of our options in regard to his standing on the team,” said general manager Jerry Dipoto. “Today we have informed him that he is suspended for the reminder of the season without pay.”

While many Mariners fans angered by the tweets were pleased with the club’s decision, Weev, in contrast, thought Clevenger’s sentiments were perfectly sensible: “Instead of praising this man’s intellectual honesty and bravery, they have stolen a five figure sum of joy from his wife and children. They have taken food off of a good white man’s table,” he wrote in the post. 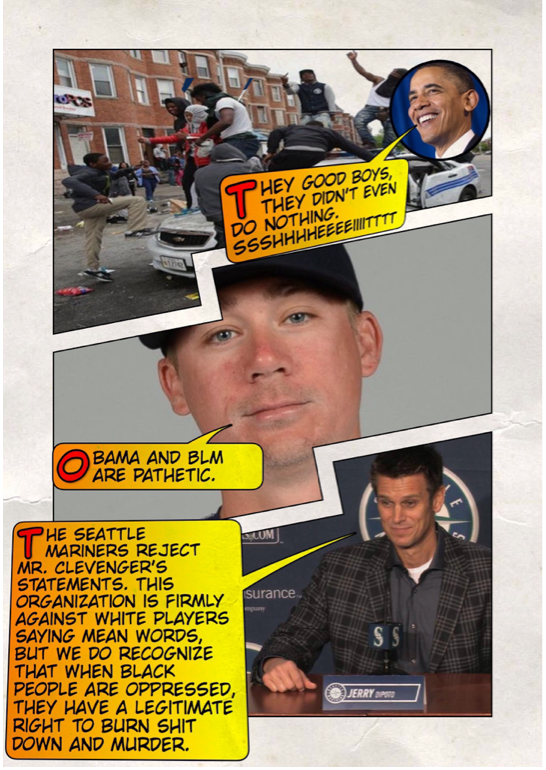 One of the memes suggested by a Daily Stormer commenter to use to send to the Mariners in protest.

The hacker, who has become closely affiliated with Daily Stormer publisher Andrew Anglin and has previously distributed flyers calling for the deaths of children, urged his readers to flood the Mariners with protests on social media and on Internet forums, as well as to call Mariners executives to complain (with their personal numbers conveniently listed).

Mariners officials, however, expressed surprise when contacted by Hatewatch, indicating they had seen nothing to suggest they were being inundated with hateful messages from neo-Nazis and “alt-righters,” though they acknowledged that the Clevenger suspension had sparked a great deal of social-media commentary on the team.

One of the commenters at Daily Stormer posted the email he said he had sent the Mariners defending Clevenger and attacking Black Lives Matter as a “terrorist organization,” concluding: “Myself and many others are ready and willing to defend Mr. Clevenger's right to freedom of speech. He threatened nobody. He didn't swear or use racial slurs, and thusly, I implore the Seattle Mariners to revoke Mr. Clevenger's suspension immediately and issue a formal apology. If not, this could result in a public relations debacle for the Mariners as many loyal fans will be tuning out.”

Others were more ominous. One posted a message sent to a Mariners official: "There will be ramifications for your actions. You sided with a domestic terror organization over Steve."

The Mariners press-relations office ultimately declined to issue any official statement on the matter.