Police in Richmond, Calif., have arrested two men and are seeking a third as suspects in an assault on a Sikh man who says he was a victim of a hate crime. 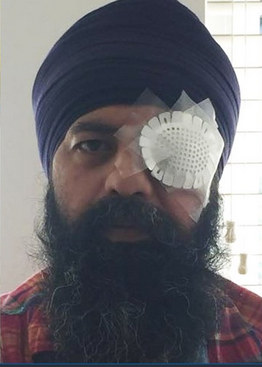 The assailants knocked the turban off the head of Maan Singh Khalsa, 41, and used a pocket knife to cut off a handful of his religiously mandated unshorn hair, the Sikh Coalition said in a statement calling attention to the attack.

The assault occurred at 9 p.m. on Sept. 25 when a group of white men in a Ford F-150 truck threw a beer can at Khalsa’s car as both vehicles were stopped at a traffic light on Hilltop Mall Drive in Richmond, a Bay Area community, the statement said.

Khalsa drove off, calling 911, but at a second stop light at least two of the men jumped from their truck and approached Khalsa’s drive side window, yelling, “Cut his f------ hair!”

His Sikh turban was knocked off as the assailants cut his hair, assaulting Khalsa in the face in the process. He sustained cuts on his fingers and his hands, a swollen black eye and extensive damage to his teeth, the statement said.

The assailants drove off in the Ford truck, but two of the attackers later jumped out near an Interstate 80 on ramp.

Chase Little, 31, of Beaumont, Texas, and Dustin Albarado, 25, of Ponchatoula, La., were arrested on suspicion of felony assault and later released, the East Bay Times reported in weekend editions.

Contra Costa County prosecutor Simon O’Connell told the newspaper that he is reviewing the case and will decide this week what type of charges to file in the case.

The Sikh Coalition described the assault victim as a U.S. Citizen and the father of an 8-year-old daughter. He has lived in Contra Costa County for nearly 7 years and works full time as a computer technician, the coalition said.

“We believe that Mr. Khalsa was targeted because of his Sikh religious identity,” the coalition statement said, urging prosecutors to file hate crime charges under California law. The Sikh Coalition is a community-based civil rights organization involved in education and fostering civic engagement.

“The discrimination is largely based upon a mistaken perception that Sikhs are affiliated with Al Qaeda, ISIS, or the Taliban,” the statement said.

In August 2012, a neo-Nazi walked into a Sikh temple in Oak Creek, Wis., and killed six Sikh worshippers and injured four others before taking his own life. One theory suggested Wade Michael Page may have mistakenly believed he was killing Muslims.

The Richmond area is home to a large Sikh population. The Sikh house of worship –– known as the gurdwara –– in nearby El Sobrante, Calif., has a congregation of over 5,000 members.

“Given the brutal nature of the attack –– in which Mr. Khalsa’s Sikh articles of faith were targeted –– the local Sikh community is fearful that others may also be targeted because of their  Sikh religious appearance,” the coalition said. “Mr. Khalsa’s trauma is shared by the Sikh community, which is keenly following the investigation and prosecution of his attackers with the hope that justice will ultimately be served.”