An old and seemingly familiar face has started making his way back into the white supremacist scene.

And, some aren't happy about the idea of a one-time federal witness in several high-profile trials and a suspected pedophile being allowed to tread where Klansmen aren't admitted.

Bill Riccio, aka William E. Davidson, reportedly attended the League of the South national conference in June, then was suspected of attending the much-publicized Unite the Right rally in Charlottesville, Virginia, in August during which a counter-protestor was killed when a white nationalist drove a car into the crowd.

Riccio, who ran a compound known as the WAR House near Birmingham, Alabama, in the early 1990s, has a distinctive background. He testified against members of The Order, a violent white supremacist group aiming to create a white homeland in the Pacific Northwest, as well as at the sedition trials in Fort Smith, Arkansas, in the 1980s. He's also been accused of being a pedophile and using the white nationalist movement to draw in his alleged victims.

Despite those seemingly unforgivable affronts to white nationalism, League of the South founder Michael Hill, who professes "Faith, Folk and Family living," allowed Riccio to attend the conference in either a massive oversight or an intentional (and quite hypocritical) move aimed at helping boost numbers at the convention and Charlottesville rally.

This, despite the fact that much of the information about Riccio is readily available online via a quick Google search. Either way, it hasn't played well among white supremacists, even those such as Shaun Winkler, an outspoken racist with his own track record of being volatile.

Winkler, a one-time Klansman and current contact for National Socialists as well as a member of Aryan Nations, took to Facebook to post a "TRAITOR ALERT" and the white supremacist message board Stormfront to blast Hill for associating with Riccio.

"What has this movement come to these days????" Winkler asked in a Facebook post in June. "I know there is a few on my list that believe this scum is credible and a "solid brother" ....shm." 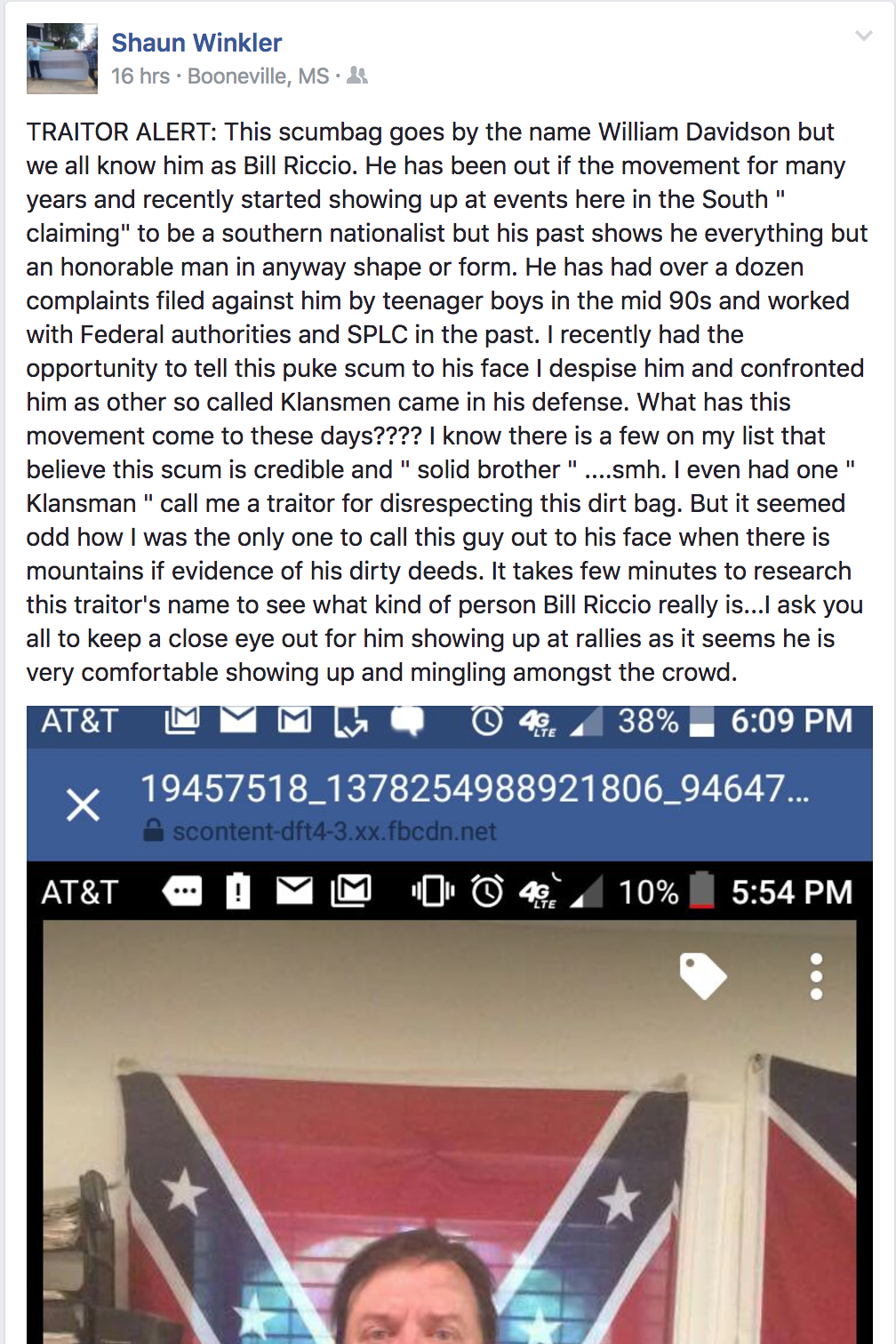 Compounding the issue is the fact that Brent Waller, Imperial Wizard of the United Dixie White Knights of the KKK Mississippi realm, and two followers were turned away from the convention in a dustup over security. 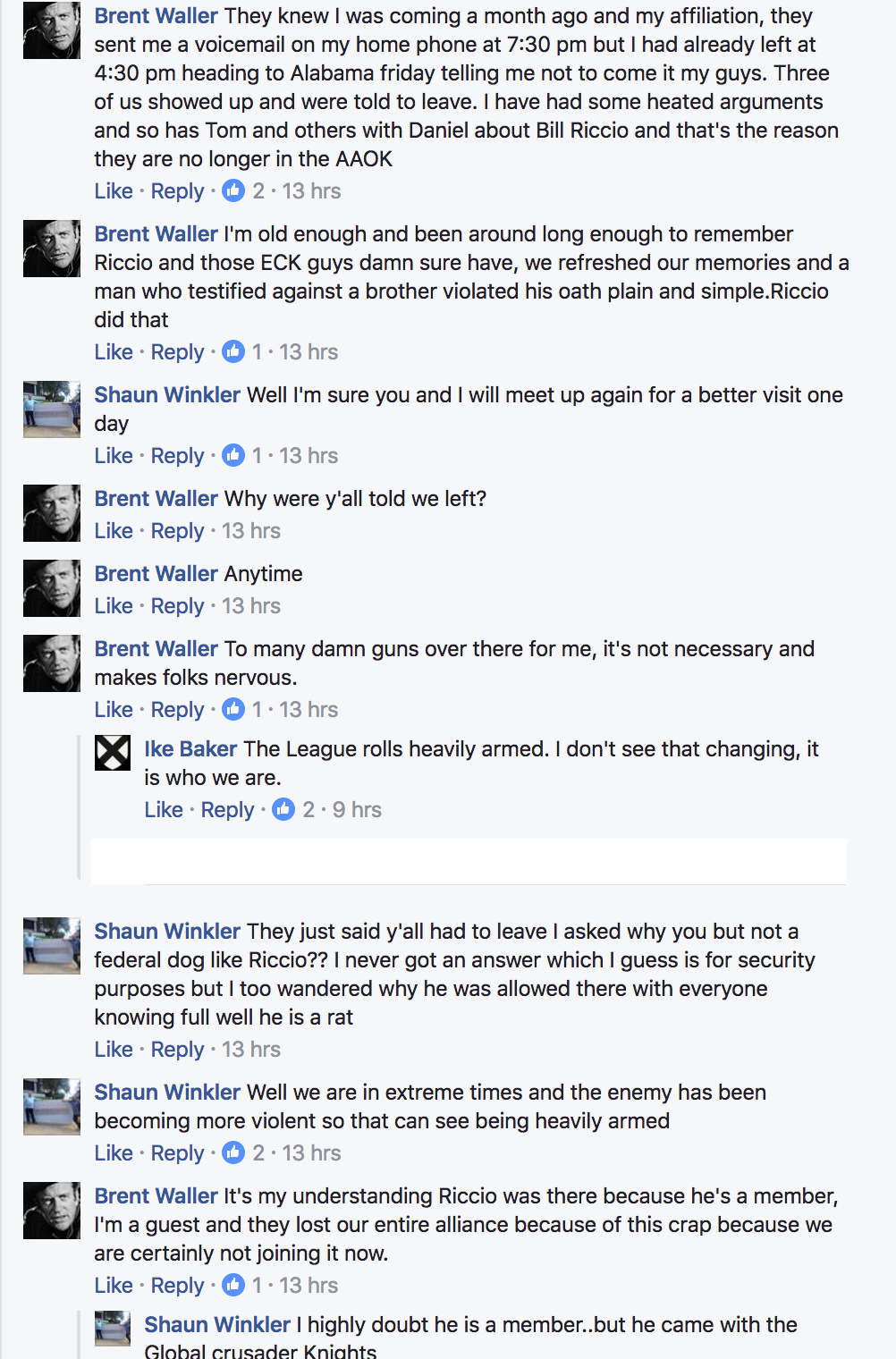 Waller, who was ready to run their activism through League of the South and allow his members to wear patches of his Klan group and LOS, has now vowed not to join with the League.

"The UDWK were seeking unity but didn't find it, so much for the unity Bullshit," Waller wrote on Facebook. 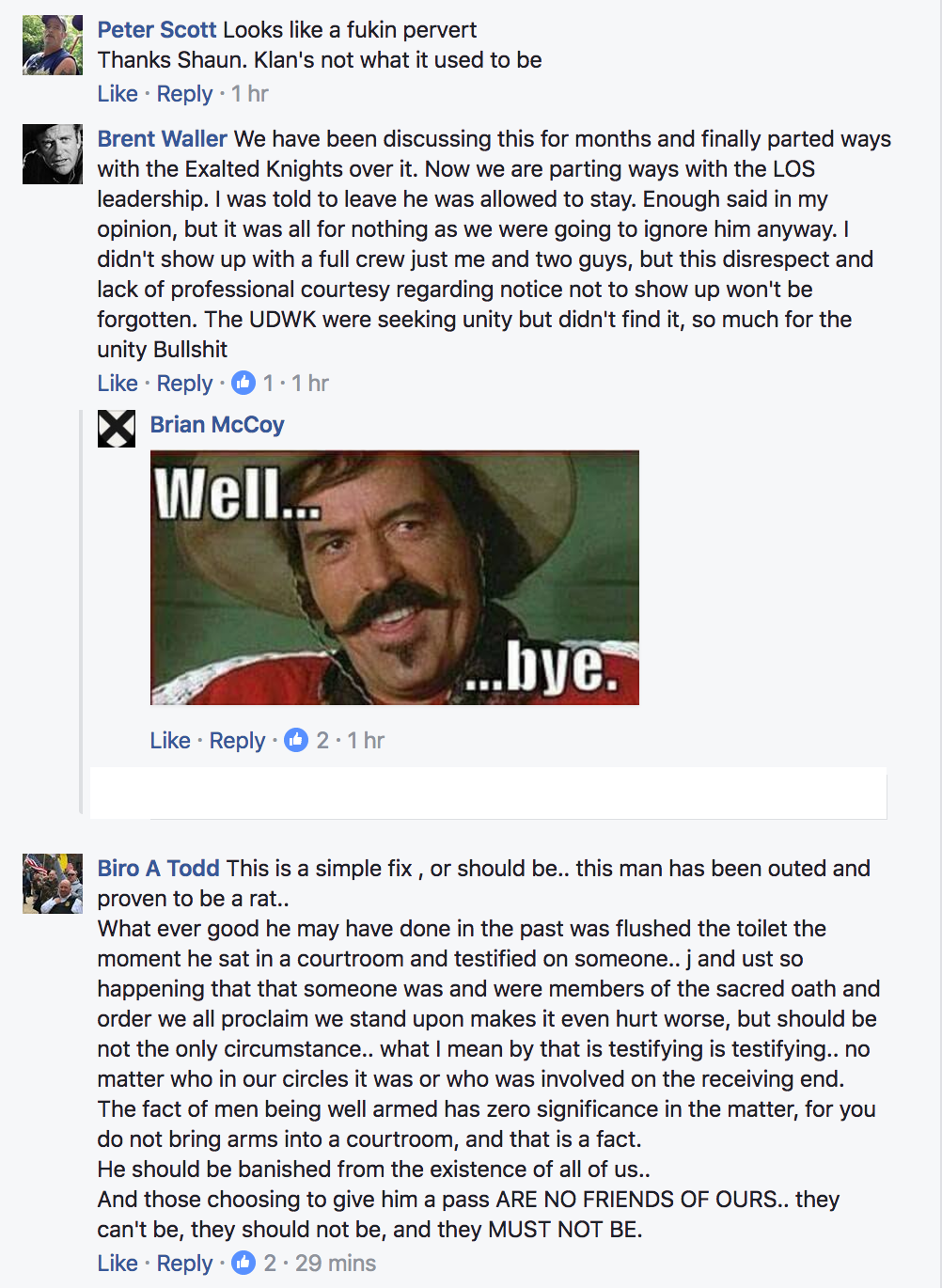 In the eyes of white supremacists, Riccio's sins aren't small and, for most, unforgivable.

Kemp, in a 2004 statement from federal prison, lambasted Riccio and others who testified against the group.

"All of them played at being real men and were not up to the task," Kemp said. "No longer should they have anything to do with our people."

And, while he ran the WAR (short for White Aryan Resistance), allegations arose from former residents that Riccio searched out young recruits, then manipulated them, sometimes into having sex. (Riccio has denied those allegations.) In a 1992 HBO documentary called Skinheads, U.S.A., Riccio said of his mostly teenaged followers: "Send us your broken toys, and we'll fix them."

Among Riccio's "broken toys" was Leslie Baas, aka Hillbilly, a Confederate Hammerskin who went on to lead the violent motorcycle gang The Outlaws. And, two Riccio recruits were convicted of killing a homeless man in April 1992, just hours after attending a party marking Adolph Hitler's birth.

Winkler, for one, is puzzled by Riccio's seeming acceptance back into the white supremacist movement.

"I ask you to keep a close eye out for him showing up at rallies as it seems he is very comfortable showing up and mingling amongst the crowd," Winkler wrote in Facebook in June.

Riccio appeared at a second rally in Shelbyville, Tennessee, in October, where Winkler and Waller threatened him with a beat down. Since then, the League of the South has distanced themselves from Riccio.

Hill could have avoided all the trouble. All anyone has to do is search online for him.