Outside the federal courthouse in Las Vegas, where Cliven Bundy, two of his sons and a militia commander are facing charges stemming from an armed standoff with the federal government nearly three years ago, supporters gather in a field of political placards.

Calls for jury nullification — the idea that a jury can ignore laws it deems unconstitutional — compete with attacks on the federal judge overseeing the proceedings, as well as an assorted coterie of signage pitting the Bundy family as victims, “political prisoners.” There are banners wrapped around trees outside the courthouse. Flags dangle from folding ladders: the American flag often alongside the “Title of Liberty” flag, a banner referenced in the Book of Mormon.

“In Memory of our God, our religion, and freedom, and our peace, our wives, and our children,” the flag quotes Captain Moroni, an important military commander in the Book of Mormon known for raising a “title of liberty” in a call to arms.

To see a flag of Mormon faith blowing in the winds of the American West is not surprising for the Bundy family, which has frequently infused their actions with undertones of their faith. But as the trial has progressed, there have been stories spread by word-of-mouth of a book seen by few outside a tight circle of family supporters: The Nay Book.

Compiled by Keith Allen Nay, a Bundy friend and fellow rancher, the book is a scrapbook mix of letters, founding documents of both the United States and the Church of Latter-day Saints of Jesus Christ mixed with ideas that have existed in the antigovernment “Patriot” movement for decades. Seen by few outside a tight circle of family supporters, the book lays out a religious justification for resisting the federal management of public lands.

Last week, Melissa Laughter, a one-time supporter of the Bundy family, began distributing the The Nay Book. In describing the book at the time, The Washington Post reported that it "appears to lay a religious foundation for the rancher’s strong and consistent views that the federal government has been trampling his rights.”

The book begins with a letter from Cliven Bundy.

Fifteen years before he engaged in an armed standoff with the federal government in a dusty wash in Nevada, Bundy wrote a letter to any who might read the book that he had found, in its pages, answers to a fight with the federal government that was then in its seventh year. As Bundy explained, Nay, his friend, had found that his faith was in conflict with federal authority.

“[Nay’s] desire was to answer the question that is before many members of the Church of Jesus Christ of Latter-Day Saints. What is the Constitutional duty of a member of the Lord’s church?” Bundy wrote in the letter, dated February 11, 1999.

The book lays out that duty, annotated against Mormon scripture: to defend the Constitution with strict interpretation in what the family sees as a conflict between heaven and hell over the future of a Constitutional republic. The book also suggests the Bundy’s fight with the federal government is more than a highly polarizing issue of public lands, more than even a culture war or a paramilitary conflict that spread across the antigovernment “Patriot” movement.

For the family and a group of supporters, the fight for public lands is a religious war.

“They’re not just talking about property rights,” said Matthew Bowman, a professor at the University of Nevada-Las Vegas and author of The Mormon People: The Making of an American Faith. “They’re talking about this sort of deeply moral notion of the freedom to choose. Which, for them, is very much bound in their ability to follow God and to do what God wants to do. I think it’s very much a religious struggle.”

Following the 2016 armed takeover of the Malheur National Wildlife Refuge in Oregon, the Mormon Church condemned the Ammon Bundy’s religious defense of his actions.

“Church leaders strongly condemn the armed seizure of the facility and are deeply troubled by the reports that those who have seized the facility suggest that they are doing so based on scriptural principles. This armed occupation can in no way be justified on a scriptural basis,” the church said in a statement just days after the takeover.

While the church has not publicly commented on the April 2014 standoff, nor on the family’s religious argument for allowing militias to take up arms in their defense, the book is an intimate window into the family’s fringe views on the federal government through a piecemeal intermingling of faith and antigovernment “Patriot” ideology.

“It’s a book of things we’ve compiled of things written by other people that explain why we believe what we do and what our stand is,” Carol Bundy told the Post. “It’s our belief. It’s where we get our strength. It’s things we’ve gathered from teachings of our prophets, our scriptures. It’s why we believe so strongly in [sic] that the Constitution is a divinely inspired document.”

The book quotes church leaders who have historical influence on the antigovernment movement, and heavily from leaders such as Ezra Taft Benson, the secretary of agriculture for President Dwight D. Eisenhower and the 13th president of the Mormon church.

An avowed opponent of communism and socialism, Benson praised the conspiracist John Birch Society as “the most effective non-church organization in our fight against creeping socialism and Godless Communism.” Benson was not an official member of JBS, but its influence on him, often annotated with scriptural references, is on display in The Nay Book.

In an excerpt of an essay titled “The Constitution: a heavenly banner” included in the Nay Book, Taft Benson writes of Joseph Smith, the founder of the Mormon Church, as a political prisoner for professing the Constitution as the word of God. “Joseph Smith, while unjustly incarcerated in a cold and depressing cell of Liberty Jail at Clay County, Missouri, frequently bore his testimony of the document’s divinity: ‘The Constitution of the United States is a glorious standard: and is founded in the wisdom of God. It is a heavenly banner.’”

It is not by accident that Benson is used to justify the Bundys’ attack on public lands, Bowman said. Benson was close to W. Cleon Skousen, who in 1971 published and influential tract of New World Order conspiracy theory, The Naked Capitalist, which described a cabal of scheming, internationalist-minded bankers and government officials set on destroying the Constitution. That same year, Skousen founded the Freeman Institute in Provo, Utah, which has since been renamed the National Center for Constitutional Studies (NCCS).

In recent years, as the antigovernment “Patriot” movement saw incredible growth under the Obama administration, NCCS lecturers traveled the country propagating an ultra conservative interpretation of the Mormon message: America’s return to extremely limited government is destined to happen, the message went, and founding of the United States is a literal “miracle.”

But there is more, Bowman said. That message, distorted through the lens of a fringe religious perspective, has proven to be incredibly volatile.

“The reason that big government is bad and the reason that socialism and communism are is because they are following Satan’s plan. They are removing our free agency,” Bowman said. “They are taking away our freedom to choose through laws and regulation.”

To talk about the Bundys and public lands is to talk about a relationship steeped in the cultural mosaic of the West, a landscape defined by relationships to land and water, by blood and soil, family and faith. While it is the story of the larger American West, it is also the story of how radical interpretation of Mormon doctrine hid in the West’s growing antigovernment resistance.

“It is difficult to exaggerate the quasi-religious zeal with which the war on the west [sic] is waged,” Bundy supporter Shawna Cox, who was charged and acquitted for her role in the armed occupation of the Malheur National Wildlife Refuge, wrote in The Last Rancher Standing, her personal account of the Bunkerville standoff.

In turn, however, it is difficult to underestimate how prominent a role a fringe religious idea has played, and continues to play, in the Bundy’s challenge of federal authority –– especially in light of The Nay Book.

While the book is only a fragment of what the Bundy family believes, it helps answer critical questions that have surrounded the family for years: what are the origins of the their beliefs regarding state sovereignty, grazing rights, water rights and federal rule. And, perhaps more fundamentally, how did a fight that began over grazing rights become an all-consuming family tradition pursued with the fever of a religious passion.

The answer lays in a skewed perversion of the faith, said Melissa Laughter, the Bundy supporter in Nevada, who has since soured on the Bundy cause.

“At the end of the day, we follow the guidance and leadership of our apostles and prophets. So once people start going off the reservation, like Warren Jeffs or these other cults in southern Utah, they’re excommunicated,” Laughter said. “One of the possible reasons the Bundys have not been excommunicated is because there is physically no way to bring them into a church court” where the formal excommunication process takes place. (The Bundys have been in jail since February 2016.) 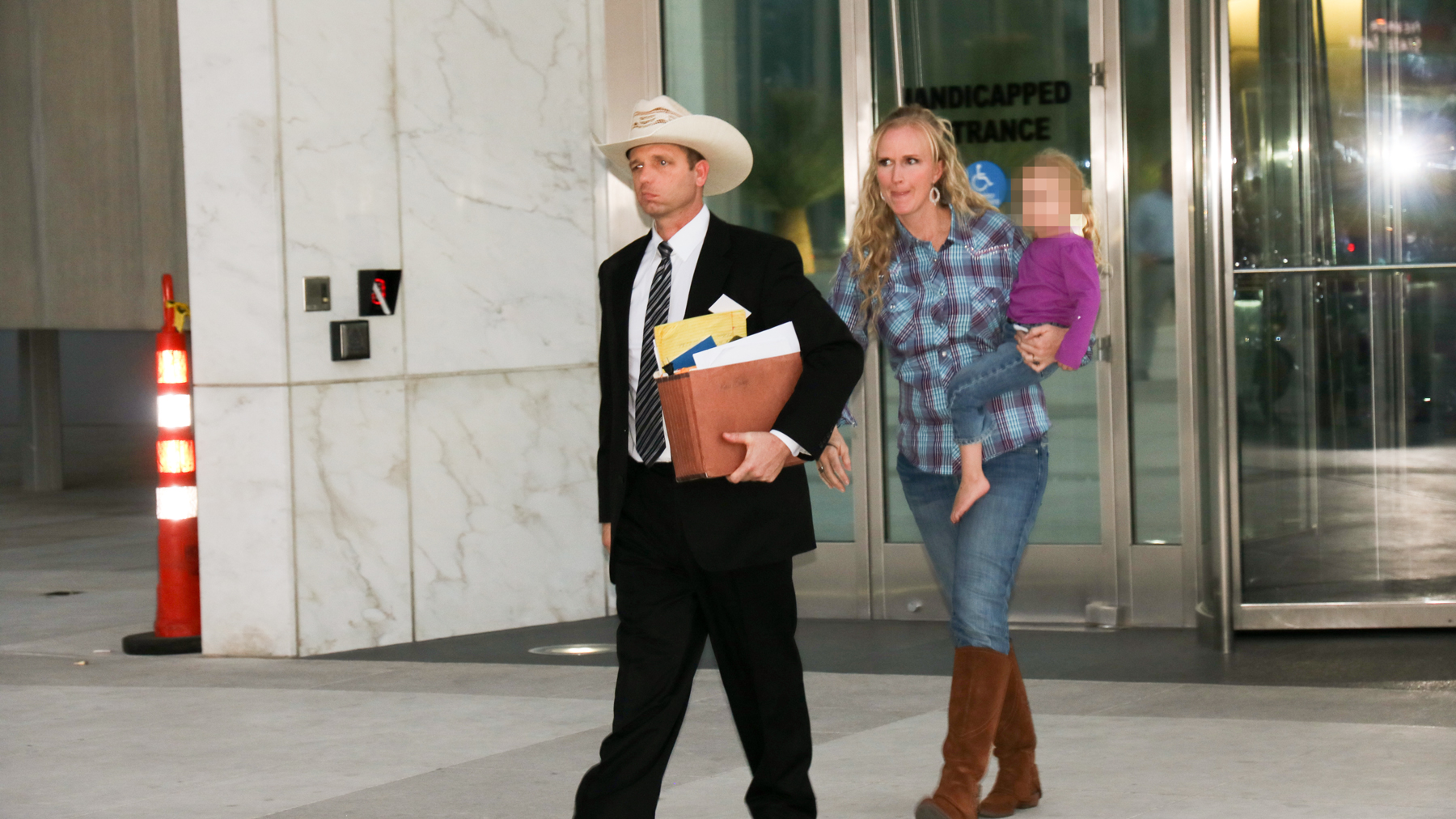 Ryan Bundy and family leave the U.S. courthouse on Nov. 14.

As the trial opened in early November, Ryan Bundy shuffled to a podium. Chains dangled from his ankles and he wore orange rubber Crocs as he prepared for his opening remarks. A copy of the Constitution published by NCCS rose from his front pocket.

Representing himself, Bundy described growing up on public lands where he and his brothers lost themselves in play and work. He encouraged jurors to “feel the freedom” of the lands he was describing and asked them to understand the Bundy family, faith and “culture.”

“All authority comes from ‘we the people.’ We delegate authority to the county sheriff who we elect, and he hires deputies, and we then have a sheriff’s department to protect our life, our liberty, our property,” said Bundy, whose voice at time cracked with emotion. “Choosing for yourself is freedom. … That’s God’s law. Man-made law is to follow that.”

With mention of the proper role of the county sheriff, Bundy did more than simply criticize federal prerogative –– he dove headlong into the depths of radical right ideology that has been central to the Bundys’ claims on land and rights, just as it was for the Sagebrush Rebellion, the County Supremacy Movement and the Wise Use Movement.