As many were busy spending time with family during the Thanksgiving, Christmas, and New Years’ holidays, extremists unleashed a series of deadly domestic violence-related attacks across the country.

Shooting attacks in California, New Mexico, Virginia and Pennsylvania occurred with regularity in December, resulting in 13 deaths (including three extremists killed by police) and more than 20 injuries. All of these incidents garnered national media coverage, but few reporters shed light on how extremist ideology likely played a role in the suspects’ violent rampages against family members, police, and neighbors.

Domestic violence among extremists is common. Yet, the phenomenon is not well-understood or publicized. In the immediate aftermath of these types of incidents, authorities too often overlook and regularly dismiss connections between the suspect’s violent behavior and his extremist affiliation. Few elaborate on how extremist beliefs may have played a role in the suspect’s temperament and violent behavior – fueling the suspect’s anger and self-justifying violent action. Since mental illness can be a contributing factor in extremist attacks, authorities oftentimes quickly focus on that aspect of the suspect’s behavior, which provides for an easy explanation leading to a quicker resolution of their investigation.

Many will remember the April 2009 shooting of five police officers by white supremacist Richard Poplowski in a suburb of Pittsburgh, Pennsylvania. Poplowski, who often fought with his mother about his living arrangements, opened fire with an assault rifle when police officers responded to his mother’s cry for help. Authorities had been summoned to the Poplawski residence because the mother wanted her son evicted from her residence. Three officers died at the scene and two others were seriously hurt. Poplawski later surrendered and received a death sentence upon conviction. At the time, Poplawski’s ambush was the third deadliest attack on U.S. law enforcement since the 9/11 terrorist attacks. Unfortunately, other fatal police ambushes by extremists have since surpassed this tragic incident. 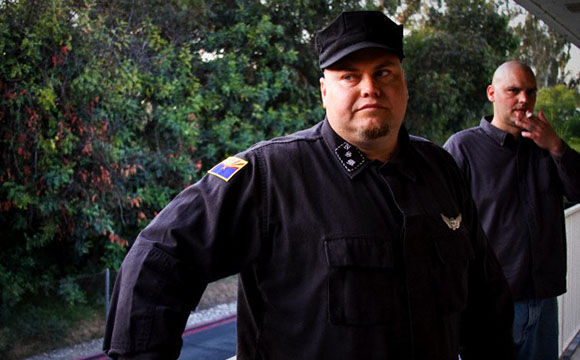 Similarly, J.T. Ready, a well-known neo-Nazi and militia member, killed himself, his girlfriend, her daughter and her boyfriend, along with their one year old daughter in Gilbert, Arizona, on May 3, 2012. Ready’s violent attack began as a domestic dispute among family members. In August, the SPLC further elaborated on several other deadly domestic violence-related incidents among doomsday preppers who subscribed to right-wing extremism and antigovernment conspiracy beliefs.

The recent series of domestic violence attacks by extremists began on November 13, 2017, in Rancho Tehama Reserve, California. Kevin Janson Neal was getting increasingly upset over his neighbors’ accusations against him as well as authorities who attempted to intervene. Neighbors had expressed concern over Neal’s threatening and erratic behavior toward them. According to his mother, Neal was suffering from mental distress and “his antigovernment rhetoric was growing worse and worse.” Over several months, Neal’s heated conversations had morphed into shouting threats at his neighbors and conducting firearms training on his property.

On November 12, 2017, Neal reportedly killed his wife at their residence, hid her body under the floor boards, and began preparing for his revenge against his neighborhood. The following day, Neal went on a 30-minute shooting rampage in the community, shooting at bystanders, car-jacking vehicles, attacking an elementary school, and finally dying in a gunfight with police. In the aftermath, authorities learned that five people had been killed and 18 others wounded. Neal illegally manufactured the firearms he used in the rampage from parts kits. He was also supposedly prohibited from owning any guns due to his violent past.

The next shooting incident occurred on December 7, 2017, when gunfire erupted at Aztec High School in Aztec, New Mexico. The shooter, William Edward Atchison, is white and was a former student. Growing increasingly frustrated with his life, Atchison targeted his anger at the school, fatally shooting two students (both Hispanic) in a classroom, and then committing suicide. Both victims were popular students and aspiring athletes at their school. One was involved in coaching gymnastics and was the head cheerleader. The other was a recent transfer student who played on the school’s football, basketball, and wrestling teams. Authorities would later learn that Atchison frequented online white supremacist sites. Atchison had also been investigated by the FBI in 2016 for online threatening statements.

The third incident occurred on December 22, 2017, when a married couple was found shot to death in their home in Reston, Virginia. Police quickly arrested the 17-year-old boyfriend of the couple’s daughter. The suspect had shot himself at the residence, but suffered a non-life threatening injury. Other family members later told police that the couple had recently intervened between their daughter and her boyfriend upon discovering his reported white supremacist affiliation. The suspect boyfriend supposedly admired Adolf Hitler, idolized Nazis, and had sent Twitter messages endorsing white supremacy. The deceased couple was known for their passion for civil rights and social justice. Their valiant attempt to save their daughter from hatred and bigotry sadly cost them their lives.

More recently, an elderly mother was fatally shot by her enraged son in Bethlehem Township, Pennsylvania, after an ongoing domestic dispute turned violent. On December 22, 2017, Justin Erik Kephart gunned down his mother — shooting her 11 times with a Russian-made assault rifle — in the front yard of his grandmother’s house. When police arrived, Kephart opened fire on them, firing over 100 rounds, pinning down one officer for an hour.

Due to the seriousness of the situation, responding authorities summoned a Bearcat armored vehicle from the Bethlehem Police Department along with the assistance of the Pennsylvania State Police Special Emergency Response Team (SERT). An eight-hour standoff ensued. Authorities later found Kephart deceased from a single gunshot wound to his head. Fortunately, no police officers were injured during the ordeal.

Investigators later learned that Kephart harbored anti-law enforcement sentiments and perhaps embraced other antigovernment beliefs. According to the county prosecutor, Kephart was well-armed and intent on “killing police at the scene.” In September 2014, Kephart posted a statement on his Facebook page supporting antigovernment cop-killer Eric Frein. “Go Frien. (sic) Keep making a f--k of all those OINKERS," he wrote. Frein, a survivalist, shot two state troopers, killing one, sniper-style at a police barracks in Blooming Grove, Pennsylvania, on September 12, 2014. He eluded a massive manhunt for over a month, but was finally captured and later received the death penalty.

Extremist experts have expressed interest in learning more about Kephart’s possible curiosity with Nazi symbology (Photos of Iron Crosses and a Nazi “SS” bolt were found on his Facebook page). Kephart also had the number “13” tattooed on his shoulders (which has significance to some white supremacist prison gangs, particularly the Aryan Circle). Kephart also had a bumper sticker on his car that read “Support Your Local White Boy” as well as a grenade sticker (popular among advocates of the Second Amendment). Bethlehem Township Police Department and Pennsylvania State Police did not respond to these inquiries.

Extremist ideology likely provides a foundation for violence because it offers a ready-made list of enemies (such as law enforcement officials), promotes an “us versus them” mentality, creates feelings of isolation, provides justification for violence, and spurs fear and paranoia. This can often lead violence prone perpetrators further down the path of anger, distrust, and depression, which may lead to violent action. These negative emotions, which are often derived from and encouraged by extremist belief systems, can push adherents down the path of desperate actions against themselves (such as suicide by cop) or perceived enemies when provoked or triggered. As a new year begins, the deadly cycle of extremist-related domestic violence is poised to rage onward.