In a review of Facebook event pages, Hatewatch identified more than 50 rallies from April 13 through May 1. The event pages are being set up all across the nation regardless of which political party controls the state house.

Facebook has become the social media platform of choice for far-right organizers and activists who engage in protests against social distancing.

“Unless government prohibits the event during this time, we allow it to be organized on Facebook,” a spokesperson for Facebook told Hatewatch via email.

The majority of these rallies run afoul of recommendations from health experts. They allow extremists, however, to reinforce the spread of far-right conspiracy theories and disinformation about COVID-19.

In Lansing, Michigan, hundreds of protesters rallied Thursday as Republican House legislators voted to not extend Gov. Gretchen Whitmer’s state of emergency. The American Patriot Rally event, organized by the Michigan United for Liberty group, called for the reopening of local businesses.

The rally first spread through Facebook before the platform decided to pull the event page. Late Thursday, hundreds of protesters gathered outside the state capital building, ignoring social distancing recommendations. In some cases, demonstrators carried firearms and were seen peddling QAnon slogans and COVID-19 conspiracies. 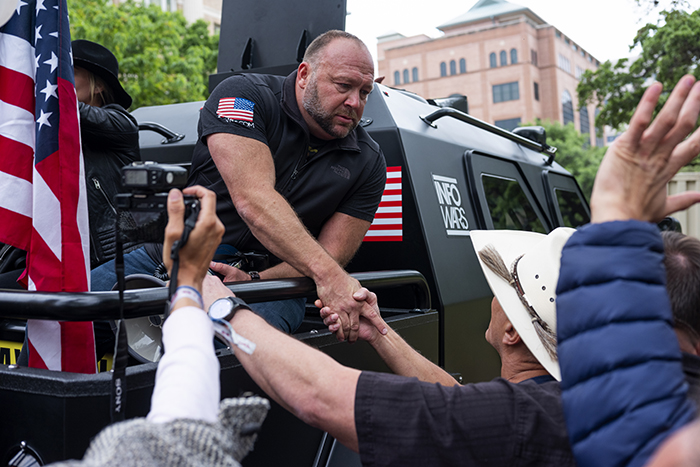 Alex Jones, radio host and creator of the website InfoWars, left, shakes hands with a demonstrator during a "You Can't Close America" rally outside the Texas State Capitol in Austin on April 18. (Photo by Alex Scott/Bloomberg via Getty Images)

Antigovernment figures such as Alex Jones are capitalizing on these gatherings to advance the message that federal institutions can’t be trusted. In the days leading up to an April 18 rally in Austin, Texas, hosted by Infowars, promotional content was circulated on Facebook. Once on the ground, Jones accused the Texas state government of enacting “martial law” and told attendees, “We don’t live in fear of some made up virus. We know the globalists and the media are the enemy.” In far-right circles, the term “globalist” is frequently used as an antisemitic slur. 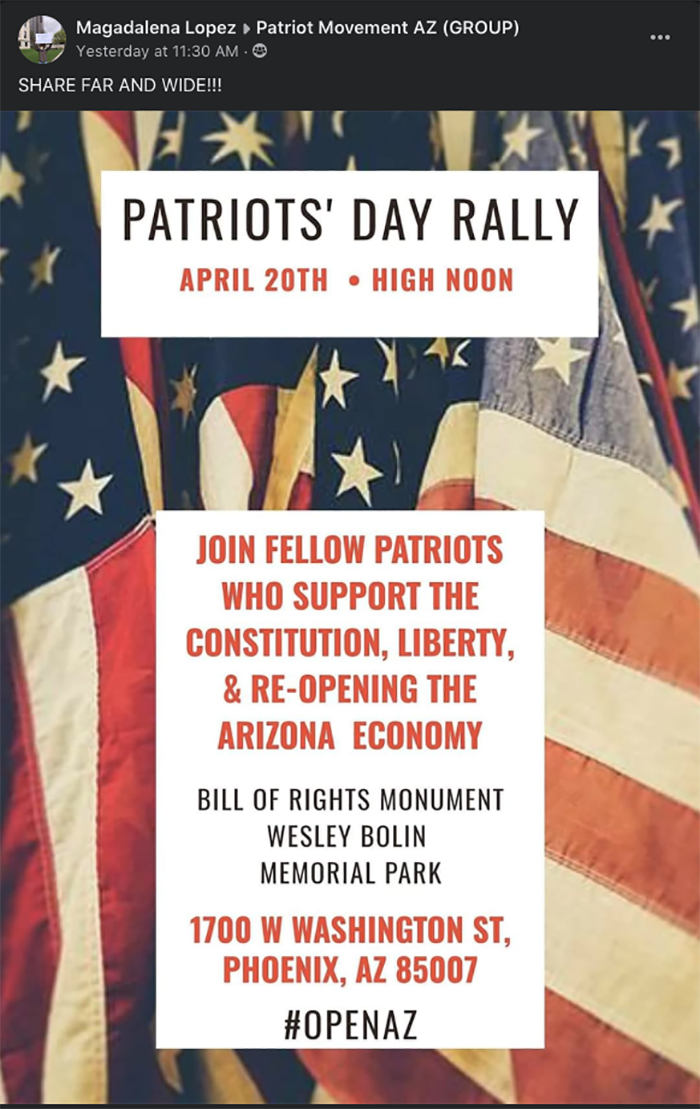 Similarly, in Phoenix, Arizona, the hate group Patriot Movement AZ shared “Patriots' Day Rally” flyers and memes in the lead-up to the April 20 rally in Phoenix. Although the group frequently dabbles in anti-Muslim, anti-immigrant and anti-LGBTQ rhetoric, the content shared aligned with common antigovernment talking points. In one instance, a member of the group’s Facebook page who goes by Brent Backus shared an image stating: “Quarantine is when you resist the movement of sick people. Tyranny is when you restrict the movement of healthy people.”

“Maybe we can put all the sick people in boxcars and take them to someplace safe, oh wait…” read one of the memes in an attempt to equate the government’s response to COVID-19 to that of life under the rule of Nazi Germany. 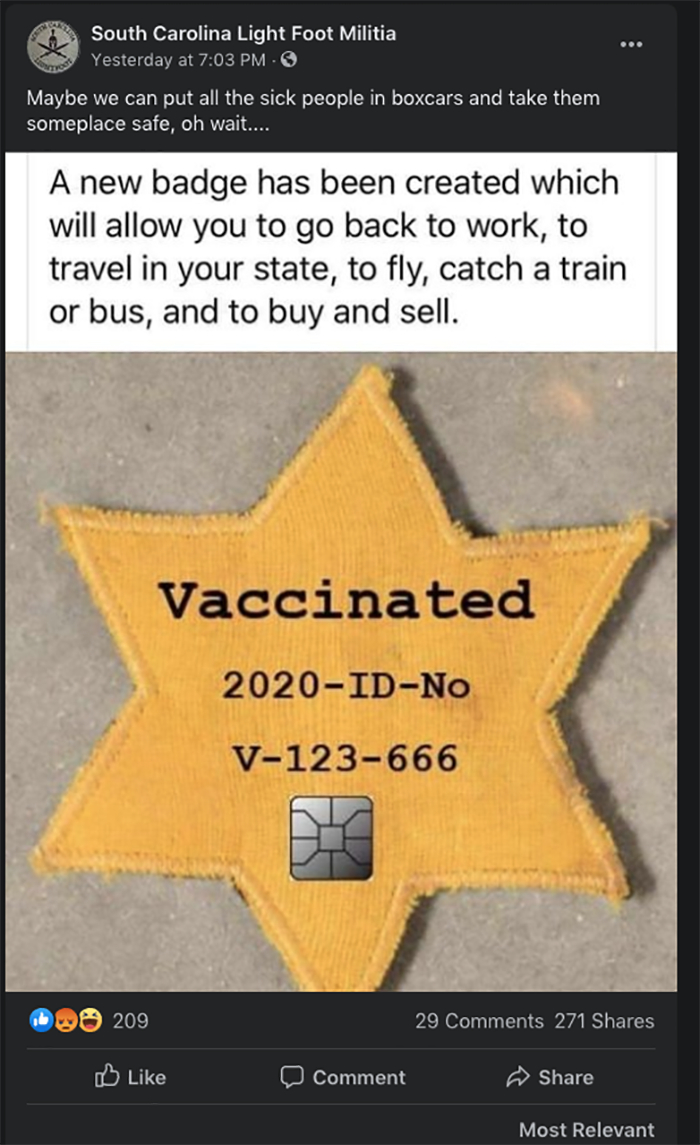 The South Carolina Light Foot militia stoked fears recently as they claimed yellow badge-style patches are in the near future for vaccinated individuals.

Other militia leaders such as John Cody, state commanding officer of the South Carolina Light Foot Militia Special Response Team, jumped on the bandwagon using Facebook to advertise a national May Day Rally.

Cody, who uses the codename “Hawkeye,” was a key organizer for the Jan. 29 Militias March on Richmond rally. The march, which was organized mainly on Facebook, was scheduled to coincide with the Virginia Citizens Defense League (VCDL) gun event. VCDL was hoping to put on a show of force for gun owners who stood in opposition to state bills that were aiming to adopt new gun restrictions. Cody’s rally ultimately helped bring together a number of right-wing militias with established gun rights organizations. 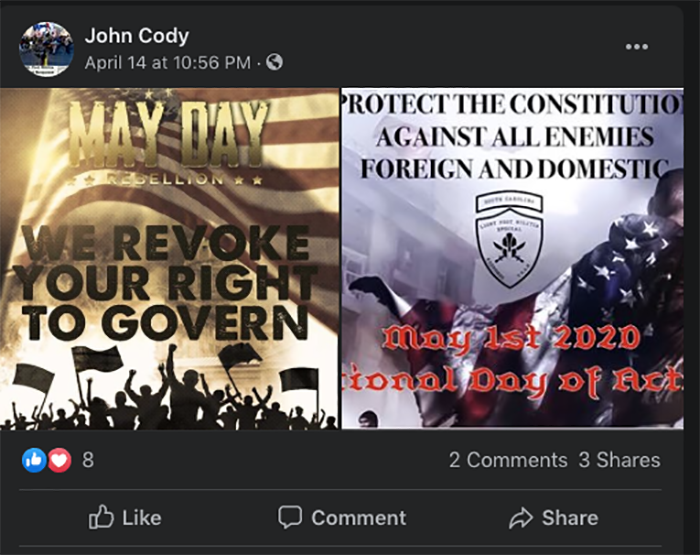 Along with Cody, Virginia state Sen. Amanda Chase, R-Chesterfield, has been rallying her supporters to protest. Chase, who was involved in a number of controversial incidents earlier in the year and was subsequently ousted from her local GOP committee, has been sympathetic to far right causes. She made a personal appearance at the January VCDL gun rally where she joined several antigovernment militias in an attempt to protest new gun legislation. 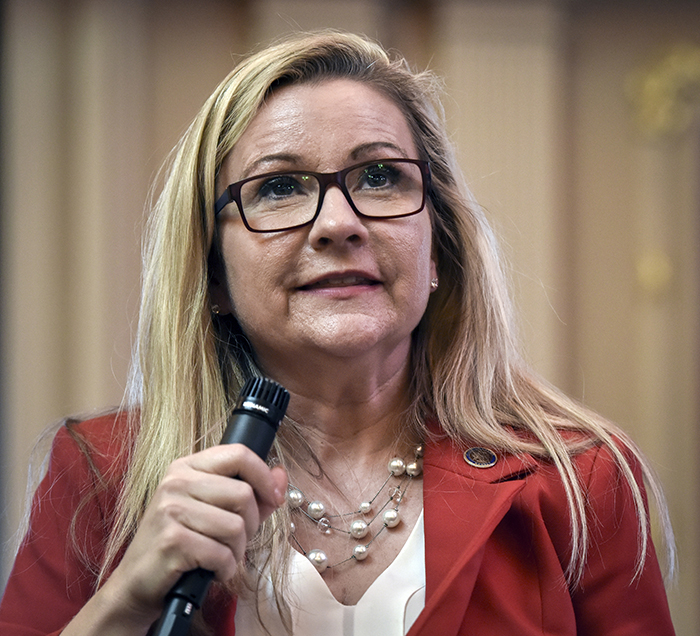 Chase recently got on Facebook and shared details for several rallies against social distancing scheduled in Richmond, encouraging her supporters to attend, saying “Share with those who believe in Liberty, Freedom and pursuit of Prosperity, …not liberalism.”

Kayla Gogarty, a Media Matters senior researcher who has been tracking these rallies since they first appeared on Facebook, told Hatewatch: “We found that a lot of these Facebook groups and a lot of these events are including members of local militias and members of some local anti-vax groups. We’ve seen a lot of far-right figures attend some of the events like the Proud Boys. We’ve seen pro-gun activists and antigovernment extremists at these rallies and some local government officials as well.”

A Hatewatch analysis of Facebook posts earlier last month aligned with much of what Gogarty has seen in recent weeks, with the platform being a hotbed for COVID-19 misinformation.

As first noted by the tech website The Verge, Facebook CEO Mark Zuckerberg is still heavily touting the billion-dollar company’s projects aimed at helping minimize the spread and impact of COVID-19. Facebook has donated $100 million to small businesses in a gesture made to help them through trying times. The social media company has also teamed up with Carnegie Mellon University to roll out a global symptoms survey to Facebook users in an effort to track COVID-19 growth. These initiatives come as Facebook is simultaneously failing to provide a clear solution for countering the spread of disinformation and anti-public health organizing on its own platform. 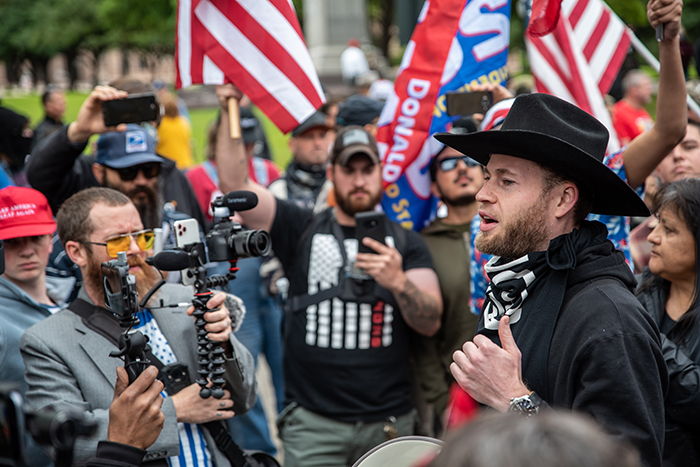 In an April 20 interview with ABC News, Zuckerberg emphasized that “the stuff that people are saying that is false around a health emergency like this, can be classified as harmful misinformation that has a risk of leading to imminent physical danger and we’ll just take that kind of content down.”

Complicating matters is the fact that not every state and country has instructed citizens to stay home. According to The New York Times, “42 states, three counties, 10 cities, the District of Columbia and Puerto Rico” have adopted stay at home orders as of April 28th. This means that if protests occur in states where stay at home orders were never adopted, Facebook faces less pressure to take immediate action.

A general search on Facebook for rally terms such as “liberate” and “reopen” brings up a plethora of groups that oppose social distancing.

The decision to hold off on pulling down content that rails against social distancing undermines the work the company has done to help survey and map the spread of COVID-19. The networking site may have taken down a handful of conspiracy posts, but the antigovernment rhetoric contained in the rally posts has the potential to expose people to greater amounts of misinformation.