Malkin, who most recently hosted the show “Sovereign Nation” on Newsmax TV, was one of nearly a dozen speakers at American Renaissance’s annual gathering from Nov. 12-14. The think tank – which bills itself as a “race-realist, white advocacy organization” – holds the event each fall in a state park about 35 miles from downtown Nashville, Tennessee. Throughout the years, Jared Taylor, the organization’s longtime head, has invited an array of neo-Nazis, white nationalists, Klansmen and other prominent figures in the American and global racist right. 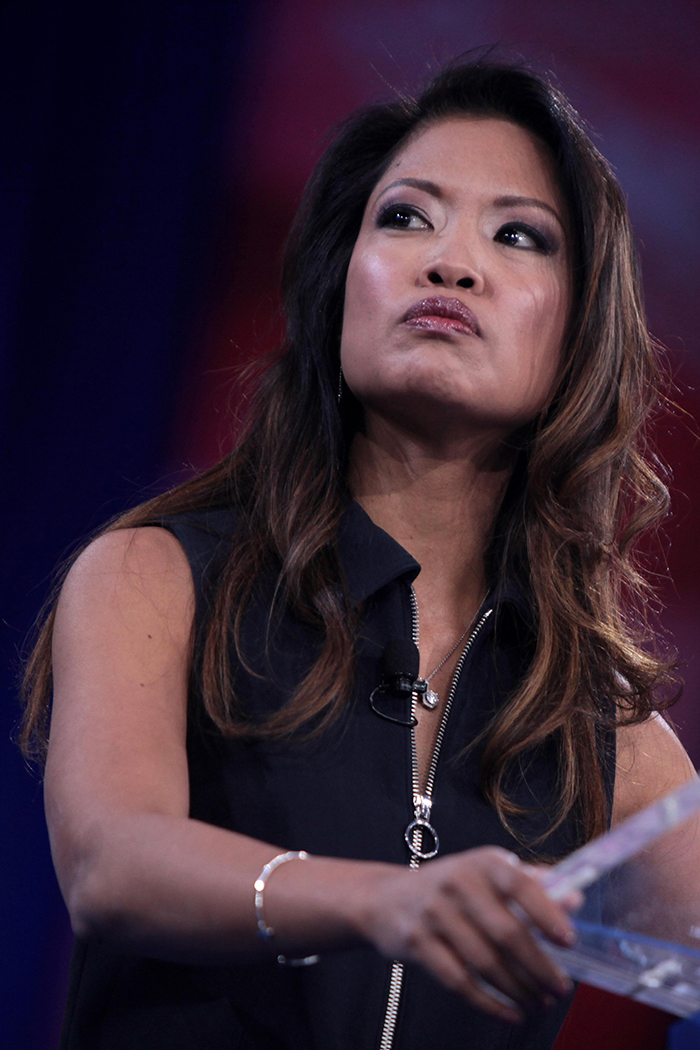 Among the event’s featured speakers this year were Sam Dickson, a former lawyer for the Klan who has said “desegregation was a mistake”; Kevin DeAnna, an American Renaissance and VDARE staffer who writes under the pseudonyms “Gregory Hood” and “James Kirkpatrick”; and F. Roger Devlin, a white nationalist writer who once claimed that Norwegian women’s “lizard brains” were causing them to fall for Pakistani men.

In her speech, Malkin extolled those far-right extremist activists involved in “hand to hand, pen to pen combat against the vast anti-white, anti-American forces bent on demographic mass murder,” according to a Nov. 15 write-up from an anonymous American Renaissance contributor. Later, the blog post noted, she compared herself to the white nationalists in the room, claiming that “one way or another, they – we – have arrived at the same shared destination point.”

While Malkin’s Nov. 13 address was her first appearance at an American Renaissance event, the site began publishing her columns on their website on Jan. 11, 2020. Since then, the site has shared 40 of her syndicated columns, which are distributed to print and digital outlets by the California-based Creators Syndicate, according to Hatewatch’s review of American Renaissance’s archives.

Hatewatch reached out by email to Malkin and American Renaissance for comment about the gathering. Hatewatch also reached out to Brian Peterson, Newsmax’s senior vice president of communications and marketing, regarding Malkin’s recent association with the network. They did not respond.

As the founder of two popular conservative digital media outlets and author of a handful of books trumpeting draconian anti-immigration policies and rhetoric, Malkin has provided a bridge between the nativist fringe and the more mainstream right wing for nearly two decades. White nationalists and anti-immigrant groups alike have lauded her work as instrumental to their causes. These include the Trump-tied Center for Immigration Studies, a Washington, D.C.-based think tank headed by Mark Krikorian that praised her “shoe-leather reporting” on U.S. immigration policy in a 2016 press release, as well as former “Unite the Right” attendee Nick Fuentes, who has called her a “champion” and “mommy.”

“I don’t apologize as somebody who has non-white skin for defending the idea that America should maintain its historic demographic balance,” Malkin told Lana Lokteff during an appearance on Red Ice TV in April 2020. Here, she refers to the belief popular among nativists and members of the white power movement that America’s white majority ought to be maintained, and does so while citing her identity as a person of color. Though Malkin has, at times, leaned on her identity as a Filipino-American to deflect criticisms of her affiliation with members of the racist far right, the inclusion of people of color in far-right groups can provide these groups with a semblance of plausible deniability for their extreme views, as Daniel Martinez Hosang and Joseph E. Lowndes argued in their 2019 book, Producers, Parasites, and Patriots.

Recently, some mainstream conservative organizations have chosen to distance themselves from Malkin because of her fraternization with certain members of the extreme right, such as Fuentes. Still, her associations with the white nationalist fringe – in particular, Peter Brimelow’s VDARE – date back to the early 2000s.

Brimelow began running Malkin’s syndicated columns on his website in 2002. Since then, VDARE has published more than 1,370 of her articles. As early as 2004, Malkin described Brimelow, a self-described “racial nationalist,” as a “friend.” She has assisted in fundraising drives for the site as well. In an appeal from Dec. 28, 2019, Malkin described Brimelow as a thinker who had “greatly influenced” her work since the mid-1990s and stated that she was “forever indebted to him.”

In the same appeal, Malkin called a handful of other VDARE contributors “indispensable,” including Kevin DeAnna, whom Hatewatch revealed in 2019 to be a VDARE and American Renaissance staffer who writes for those sites under the pseudonyms “James Kirkpatrick” and “Gregory Hood,” and Marcus Epstein, a Virginia-based lawyer and former GOP operative who, according to materials reviewed by Hatewatch, has written for the site under the name “Washington Watcher” since 2009. In emails and chats from former Breitbart editor Katie McHugh, Epstein and other extremists appeared to tie him to the “Washington Watcher” pseudonym. (McHugh, once a part of this world, has since denounced her ties to white nationalism.) McHugh verified to Hatewatch in a text-message exchange that she and others within her circle were aware that Epstein wrote for VDARE under that name. She added that DeAnna, her boyfriend at the time, frequently referred to Epstein and “Washington Watcher” interchangeably. Epstein did not respond to Hatewatch’s request for comment via email.

As Hatewatch previously reported, Epstein pleaded guilty to assaulting a Black woman in Washington, D.C., in 2009. Since the mid-2000s, Epstein has organized a handful of events where Taylor was invited either as speaker or participant. In 2006, he sponsored a debate between Taylor, then-National Review contributing editor John Derbyshire, and conservative Black activist Kevin Martin. In the run-up to Trump’s election in 2016, Epstein invited Taylor to at least one event in his D.C. area discussion club series, “Alt Right Toastmasters,” which featured a variety of prominent white nationalist speakers.

On Nov. 27, VDARE announced Malkin would join Brimelow, longtime contributor John Derbyshire, and DeAnna, albeit under his “James Kirkpatrick” moniker, for an online fundraiser on Giving Tuesday. However, according to Hatewatch’s review of later promotional material and VDARE’s Giving Tuesday livestream, Malkin appears to have dropped out of the event last minute.

Members of a media organization tied to a racist, far-right lifestyle brand joined Malkin and others at the conference, Hatewatch found.

On Sunday, Nov. 14, Daryle Lamont Jenkins of One People’s Project uploaded footage from the conference to YouTube depicting three men, two of whom were associated with the self-described nationalist media outlet Media2Rise. Robert Rundo, the former head of the racist street-fighting club Rise Above Movement, founded Media2Rise in 2020 to provide positive coverage to white power groups, both in the U.S. and abroad. In the video, three men – a Media2Rise correspondent who identified himself as Lucca Corgiat; Graham Whitson, the group’s videographer; and an unknown man wearing a mask and sunglasses – approached Jenkins and antifascist activists asking for comment. When Jenkins asked Corgiat if Rundo was at the event, the correspondent for the white nationalist network responded, “I can’t answer that,” as the masked man and Whitson, who was recording the encounter, looked on.

Both Rundo, who is presumed to be based in Europe, and Whitson have recently faced legal challenges for their respective roles in the white power movement. Federal authorities charged Rundo and other members of the Rise Above Movement with rioting in June 2017 in connection to a demonstration that March in Berkeley, California, that descended into violence. While a district judge dismissed the charges in 2019, a court of appeals reversed that decision and reinstated the charges this March.

Though Media2Rise has produced documentaries profiling white supremacist groups in the past, it is unclear what, if any, footage of the conference the organization intends to release.