The man who allegedly shot dead at least 10 people at a Buffalo, New York, supermarket on Saturday may have been preoccupied by the so-called “great replacement” conspiracy theory. A sprawling propaganda document released online under his name in advance of the attack obsessively references that theory. Authorities have yet to confirm the authenticity of the document, but if it was indeed written by the killer, it further exposes the deadly consequences of white supremacy.

This racist conspiracy narrative falsely asserts there is an active, ongoing and covert effort to replace white populations in current white-majority countries. 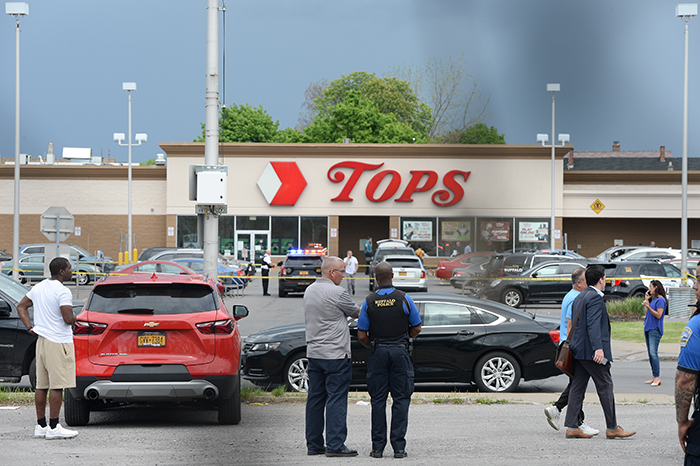 Buffalo Police confer at a Tops Friendly Market on May 14, 2022, in Buffalo, New York. According to reports, at least 10 people were killed after a mass shooting at the store. (Photo by John Normile/Getty Images)

In some periods of American history, paranoid narratives of “white extinction” have appeared to exist only on a radical fringe of racist political movements. In other periods, some of the nation’s highest political officeholders have repeated these ideas, leading to forced sterilization programs at the state level and a racial quota system becoming federal immigration law for four decades. No longer on the fringe, such narratives now have currency among some of the most powerful and influential actors in right-wing media and politics.

The “great replacement” theory is inherently white supremacist. It depends on stoking fears that a non-white population, which the theory’s proponents characterize as “inferior,” will displace a white majority. It is also antisemitic. Some proponents of the “great replacement” do not explicitly attribute the plot to Jews. Instead, they blame powerful Jewish individuals such as financier and philanthropist George Soros or use coded antisemitic language to identify shadowy “elites” or “globalists.”

Along with invocations of the “great replacement” narrative, the online screed believed to have been written by the man charged with the Buffalo shootings included copious false assertions about the intellectual inferiority and inherent criminality of Black people and false, antisemitic allegations of wide-ranging Jewish conspiracies against whites.

The attack in Buffalo is not the first time that the narrative has been linked to racist violence in recent times. The suspect accused of a mass murder at a Pittsburgh synagogue in October 2018 and the killer behind an attack at a mosque and a community center in Christchurch, New Zealand, in March 2019 each cited the “great replacement” theory. So did the suspect in the August 2019 attack on a Walmart in El Paso, Texas, and the individual who opened fire at a synagogue in Poway, California, and set fire to a mosque in Escondido, California, in 2019.

Renaud Camus, a racist French writer, coined the “great replacement” formulation. Camus falsely depicted non-white immigration to France from the decolonized Middle East and Africa as an attempt by a sinister “replacist” elite to destroy native French demographics and culture.

White supremacy and coded antisemitism were baked into Camus’ narrative from the outset.

His ideas, featured in books published in 2010 and 2011, directly influenced the growth of the far-right, anti-immigrant European identitarian movement in the ensuing decade. With national branches in several European countries, identitarians attempted to put a respectable gloss on anti-immigrant politics, though some progressed from online propaganda and banner drops to attempted interceptions of boats carrying migrants across the Mediterranean Sea.

The leader of Austria’s Generation Identity, Martin Sellner, was investigated by law enforcement in that country in 2019 after he was found to have corresponded with the mass shooter who attacked Muslims in Christchurch, though various charges against his group were eventually dismissed by a judge. The shooter also donated money to Sellner’s organization.

Members of Identity Evropa, an American offshoot of the identitarian movement, were prominent participants in the deadly 2017 “Unite the Right” rally in Charlottesville, Virginia.

Camus acknowledged the influence on his own ideas from far-right anti-immigrant British politician Enoch Powell, interwar French literary fascist Charles Maurras and Jean Raspail, author of the 1973 racist, dystopian novel, The Camp of the Saints. Raspail’s book fell out of print, but The Social Contract Press – the publishing house founded by John Tanton, the architect of the modern-day anti-immigrant movement – brought it back into circulation in 1994.

Tanton-founded groups, such as Federation for American Immigration Reform (FAIR) and the Center for Immigration Studies (CIS), heavily influenced thinking on immigration, refugee and asylum policy in the Trump administration, as led by Trump’s senior adviser and director of speechwriting, Stephen Miller.

More than a century of fearmongering

The “great replacement” can also be seen as a variation or elaboration on false narratives of “white extinction” that have circulated since the 19th century in Europe and in white-majority countries subject to European colonization and settlement.

In 1892, British-Australian author Charles Pearson warned that one day soon, white people would “wake to find ourselves elbowed and hustled, and perhaps even thrust aside by peoples whom we looked down upon.” His book National Life and Character launched a genre that included even more apocalyptic visions of white extinction from American authors, including the racist and antisemitic New York lawyer Madison Grant.

Grant’s own scientific-racist 1916 book, The Passing of the Great Race, warned of the decline and extinction of America’s “Nordic” racial stock. (Scientific racism is the discredited, pseudoscientific belief that scientific evidence exists to support racism and racially biased state policy.) Grant did not write from the fringes: His book influenced the widespread adoption of eugenic policies, restrictions on non-white immigration and anti-miscegenation laws in the U.S. in the interwar period. (Eugenics is a debunked pseudoscience whose believers are obsessed with controlling heredity through hateful notions like “racial hygiene” to preserve supposedly superior races and ethnicities.)

Grant’s book had an influence far beyond North America. In devising their own racist political order, Germany’s Nazi regime and Hitler himself drew on narratives of white extinction and on American policies influenced by Grant and like-minded authors. The Nazis falsely attributed the declining “racial hygiene” of white races, and the advance of “Bolshevism” in Europe, to Jewish plots.

In many majority-white countries in the early 20th century, ideas of white extinction were recited in the halls of power and fed into policies of racial exclusion, segregation and genocide.

Figureheads of the U.S.-based eugenics movement – such as Harry Laughlin of the Eugenics Record Office and Wickliffe Draper, who provided the first endowment for the eugenicist Pioneer Fund – collaborated with lawmakers, researchers and political groups to sustain the eugenic policies, ensure a white-Christian majority and quash efforts to achieve racial equality.

Laughlin, for example, helped structure the racist quota system used in American immigration policy that President Calvin Coolidge signed into law in 1924. (The 1924 Immigration Act’s provisions were overturned in the 1960s.) Draper’s Pioneer Fund and Laughlin, who was also its first president, communicated with Nazi scientists who established the conceptual framework for Hitler’s own aspirations for “racial hygiene” in Germany.

Laughlin and others also supported the forced sterilization laws that passed in 31 states, the District of Columbia and Puerto Rico. Women of color and women with disabilities were disproportionately victimized by these laws. In 2016, NPR reported that “as many as 70,000 Americans were forcibly sterilized during the 20th century.”

In more recent times, a formulation of white extinction anxiety known as “white genocide” has circulated broadly on the far right and was included in the accused Buffalo shooter’s propaganda post alongside the “great replacement” narrative.

White nationalist David Lane – who was imprisoned for crimes committed as a member of the white supremacist terrorist group The Order – popularized this idea in his “White Genocide Manifesto,” which he wrote in prison.

Lane and others who promote the idea of “white genocide” portray the fear at the heart of the “great replacement” – non-white immigration – alongside other supposed dangers to whites, including mixed-race families, abortion, same-sex relationships, mass media (which they falsely portray as a vector for Jewish propaganda) and drug and alcohol dependency.

And while “great replacement” propaganda is frequently aimed at newer immigrant cohorts – Middle Easterners, South Asians and Africans in Europe, and Latin Americans in the United States – “white genocide” proponents often falsely depict Black people as pawns in a Jewish plot to undermine white America with violence and crime.

The rhetoric in the alleged Buffalo shooter’s document indicates that he has absorbed a wide range of apocalyptic racist propaganda in online forums that have played a part in radicalizing other perpetrators of racist violence. But great replacement narratives circulate far beyond sites such as 4chan.

Fox News host Tucker Carlson’s rise to the top of cable news ratings, and the peak of his influence on right-wing politics, has been accompanied by repeated invocations of imminent white extinction. Carlson has used the phrase “great replacement” on air. He seems to otherwise avoid using the terms favored by open white power activists, but he nevertheless regularly portrays everything from immigration at the United States’ Southern border to falling birthrates as existential threats to white people.

Carlson has a direct influence on the thinking of other powerful actors, as was seen in 2019. After Carlson ran a segment claiming white South African farmers were facing a genocidal threat – an idea that had bubbled up from the so-called “alt-right” over preceding months – then-President Donald Trump announced on Twitter that he had asked then-Secretary of State Mike Pompeo to look into “the large scale killing of farmers” in the country.

As Hatewatch reported the same year, Stephen Miller, the Trump administration adviser and speechwriter, recommended in 2015 that Breitbart run articles on The Camp of the Saints, the book whose vision of a Europe overrun by non-white immigrants inspired Renaud Camus to condense these fears of white extinction into a single, memorable phrase.

Hatewatch also noted that Miller repeatedly emphasized the importance of the 1924 Immigration Act and its political sponsors.

In a June 2, 2015, email containing a link to an MSNBC story noting the beginning of Immigrant Heritage Month, Miller wrote, “This would seem a good opportunity to remind people about the heritage established by Calvin Coolidge, which covers four decades of the 20th century.”

Two years later, Miller was part of the Trump administration, which combined draconian immigrant and refugee detention with narratives of migrant caravans orchestrated by Jewish billionaires.

Fears of white extinction can inspire state violence just as surely as they do the violence of mass shooters. And while “great replacement” as a term may have been coined abroad, the white supremacy at the core of the conspiracy is dyed in the fabric of this country’s hard history.