A Polish cultural center paid right-wing provocateur Andy Ngo 720 euros (roughly $773) in public funds for a speech about the left-wing protest movement antifa in October 2021, according to a contract Hatewatch obtained through a Polish public records request. 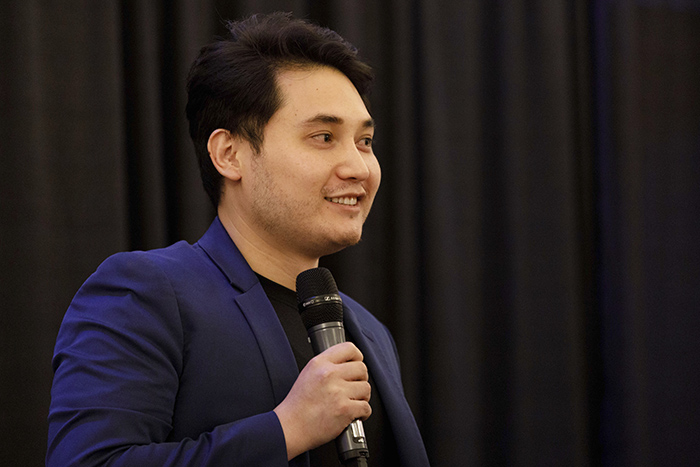 Ngo spoke at Warsaw’s Ujazdowski Castle Centre for Contemporary Art (U-jazdowski, per its Polish abbreviation) on the spurious claim that antifa, short for “antifascist,” poses danger to liberal democracies. The speech was the latest in a years-long series of appearances by U.S. hard-right and conservative figures in Hungary and Poland. Many in the broader U.S. hard-right movement view these nations as examples for good governance.

The governments of Hungary and Poland are widely considered to be illiberal democracies that engage in anti-immigrant, anti-LGBTQ policies, media consolidation and court packing to achieve their goals, similar to the hard-right wing of the Republican party. Hatewatch’s report is the first to detail a contract between a U.S. right-wing figure and Polish governmental institutions.

Ngo did not respond to two emailed requests for comment prior to publication. After publication, Ngo responded via Twitter, saying he owed Hatewatch “nothing” and he chooses “when or if” he responds.

Ngo also said he stood by his comments at the U-jazdowski..

The contract stated that Ngo was to be paid “EURO 360 per hour” for his speech and an accompanying question-and-answer section. The document also states that payment for Ngo’s “performance … shall not exceed” 720 euros.

This amount is far less than Hungary has paid Ngo’s contemporaries for speeches. A Hungarian cultural institution paid Steve Bannon – a onetime adviser to former President Donald Trump and former head of the Breitbart News Network – and racist, far-right troll Milo Yiannopoulos $20,000 each, plus accommodation and travel expenses, for hour-long speeches in 2018.

A Hungarian educational institution also paid Dennis Prager, co-founder of the influential right-wing nonprofit propaganda channel PragerU, $30,000 for an hour-long speech in 2021. The contract claimed Hungarian tax funds were used to pay for Prager’s flight, but Prager disputed this to Hatewatch.

The contract between Ngo and U-jazdowski does not include flight or accommodation costs.

Rafal Pankowski, a Polish political scientist and co-founder of the anti-discrimination Never Again Association, told Hatewatch the event was a reaction to Poland’s Museum of Modern Art’s 2019 exhibition on the importance of antifascist art. The Warsaw city government administers that museum, while the hard-right ruling Law and Justice party (PiS, per its Polish abbreviation), oversees U-jazdowski.

Pankowski portrayed the event as an attempt to raise the profile of right-wing Polish artists who exhibited their work at the event.

Since PiS named a new director for U-jazdowski in 2020, the center has become a “right-wing propaganda tool more than anything else,” Pankowski said.

Ngo is not an artist. He calls himself a journalist. Ngo rose to prominence after left-wing protesters attacked him in 2019. The attack came after Ngo regularly published articles and tweets critical of left-wing protesters and “woke” culture throughout 2018. Ngo was a regular at violent protests in Portland in 2018 and 2019 and faced allegations of cooperating with far-right groups. Ngo has denied this.

What Ngo has portrayed as journalistic work largely consists of publishing anti-antifa, Islamophobic and transphobic tweets and articles to his sizable Twitter following, along with disseminating the arrest records and personal details of left-wing demonstrators.

Ngo fits into the category of right-wing social media influencers. He helped shape the right-wing media narrative that antifa poses the real threat of political violence while downplaying the threat the far right presents. This narrative contributed to former President Donald Trump’s attempt to label antifa a domestic terrorist organization and fueled unfounded conspiracy theories that antifa was responsible for the pro-Trump Jan. 6 insurrection at the U.S. Capitol.

A YouTube video of the Ngo speech, which took place during the COVID-19 pandemic, shows empty chairs between the few attendees. Agnieszka Kolek, a Polish artist based in the United Kingdom, moderated the speech. Kolek appears alongside other right-wing commentators and artists and has created works lamenting “Islamists” introducing laws based on “sharia law” following the Arab Spring.

During the question-and-answer section, Ziemkiewicz told Ngo he respected him as a “journalist” and a “brave man.” He asked if Ngo tracked the historical similarities between antifa and the Sturmabteilung (SA), the Nazi Party’s original paramilitary wing that was active in Germany in the 1920s and 1930s.

The SA, also known as “Brownshirts” for their uniform, frequently engaged in street violence against Jewish people, left-wing groups and enemies of Nazi leader Adolf Hitler.

In 1938, the SA perpetrated the Kristallnacht or Night of Broken Glass, a Germany-wide pogrom against Jewish people that resulted in the destruction of over 260 synagogues and the arrest of roughly 30,000 Jewish men, whom the Nazis sent to concentration camps.

Ngo said that if you “strip away the uniforms” of antifascist groups and Nazi paramilitaries in pre-World War II Germany, their “actions … were really the same.”

Some members of German’s historical antifascist movement were Stalinists, led by the German Community Party. Though these members sometimes attacked liberal social democrats, German antifascists never sent tens of thousands of people to concentration camps based on their ethnicity or religion.

Critics of Ngo’s 2021 book, Unmasked: Inside Antifa’s Radical Plan to Destroy Democracy, note his attempts to downplay the fascist and far-right political ideology of the groups with whom antifa clashes at street protests. Critics also decry his “dishonest” portrayals of the threat antifa poses.

Ngo employed this narrative at the event. He showed photos of Adam Kelly, a man whom Gage Halupowski attacked with a baton at a raucous June 2019 protest in Portland. The photos show Kelly bleeding from head wounds.

Rose City Antifa documented Kelly’s links to the hard right and antigovernment groups, including a leadership position in the Oregon State Militia. Kelly and his militia organized with the Proud Boys, one of the largest far-right extremist groups in the United States, for events in the Pacific Northwest. The activists also documented Kelly’s closeness with associates of far-right group Patriot Prayer.

A report in the Portland Mercury, a biweekly alternative paper in Portland, claimed Ngo joined Patriot Prayer meetings without filming. The report claimed Ngo turned on his camera only when antifa appeared, hoping to catch altercations. Ngo denied this after the story’s publication and threatened legal action.

Ngo did not mention Kelly’s ties to extremist groups during his speech. He said Halupowski’s conviction and sentence of nearly six years as “one of the very few” left-wing activists convicted of violent crimes and suggested there is more left-wing violence than right-wing violence, if killings are omitted.

Statistics show far-right extremists are responsible for the overwhelming majority of all political violence in the U.S., including the recent mass shooting at a Buffalo, New York, grocery store that has been linked to a white supremacist document that has circulated online.

Ngo made further spurious claims in his speech about law enforcement’s efforts to apprehend left-wing activists who engage in violence and compared antifa to such international terrorist organizations as ISIS and Al-Qaeda.

Ngo said that when the criminal justice system charges individuals for violence at protests, charging documents do not feature “posts on social media, other things that sort of contextualize why the violence happened.”

Ngo bemoaned that “individuals would just be prosecuted strictly on the crime they did, which is what should happen, but then if you look at the court documents … you don’t see any mention of them … being involved … with antifa.”

However, there are numerous examples of law enforcement monitoring social media accounts of suspected left-wing activists, which sometimes lead to criminal charges.

Police in Arizona tracked an indigenous man, Loren Reed, on social media, and charged him in connection with a plot to burn down a courthouse amid nationwide protests against police violence in 2020. The majority of the evidence police presented was social media posts.

Reed accepted a non-cooperating plea deal in May 2021.

Reports have shown that Portland police enjoyed a warm relationship with Patriot Prayer. Proud Boys leader Henry “Enrique” Tarrio was an FBI informant and allegedly had a close relationship with an MPD lieutenant.

Ngo began his U-jazdowski speech by expressing his “solidarity with artists whose works … either face censorship or calls for censorship,” in reference to the right-wing artists who participated in the event.

Poland regularly censors artists, most frequently through a 1932 law that prohibits blasphemy or offending religious feelings. Typically these censors affect artists and performers who do not agree with PiS’ conservative religious governing style. Adam “Nergal” Darski, lead singer of the extreme metal band Behemoth, has faced various charges for offending the Catholic church with his music and performances since 2010. He had his most recent blasphemy charge dismissed in September 2021.

Poland also brought charges against three human rights activists who hung posters of the Virgin Mary with an LGBTQ rainbow for a halo. The case was dismissed in January.

Pankowski concluded: “As a taxpayer who paid my money for this event … I have no idea why [it] should be covered by the by the Ministry of Culture and National Heritage.”

Editor's note: Hatewatch contacted Andy Ngo for comment before this article's publication. Ngo responded after publication with a Twitter post, and we have added a summary of his comments to this article.