Ambassador Szabolcs Takács appeared at the New York Young Republican Club’s (NYYRC) annual gala on Dec. 10 to accept an award on behalf of Hungarian Prime Minister Viktor Orbán. The ambassador, who assumed the role in early 2021, applauded Orbán’s illiberal policies as victories and echoed far-right talking points in a speech recorded by Hatewatch reporters who attended the event. 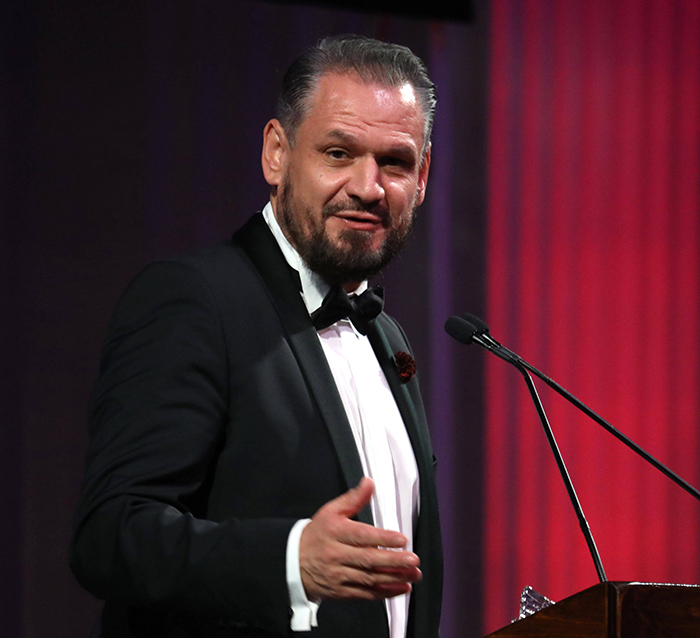 Takács began his speech by saying the NYYRC and the global right-wing movement honored Orbán and Hungary as an example they can win “elections, democratically, based on traditional conservative values.” Following NYYRC president Gavin Wax’s declaration of “total war” against enemies of the conservative movement, Takács said Hungary was already fighting the “liberal dictatorship.”

Takács did not respond to a request for comment.

Critics have accused Orbán of antisemitism for a years-long campaign that depicted Hungarian-American billionaire George Soros as an all-powerful boogeyman. They have furthered accused Orbán of racism and moves to weaken Hungary’s democracy. His government, which took power a second time in 2010, has packed courts, ended state accreditation of university gender studies programs and consolidated control of roughly 500 media outlets under a state-run foundation. Orbán’s allies have used their wealth to purchase many of Hungary’s most popular independent news outlets. Hungarian officials say these changes were made with the support of Hungarian voters, who have handed Orbán’s Fidesz party four consecutive supermajorities. (Orbán’s first term as prime minister was from 1998-2002.)

Takács outlined Hungary’s far-right populist policies as the path toward victory. He noted Hungary’s generous payouts and tax benefits for families that have three or more children, Hungary’s media consolidation and controls on higher education.

Bulcsú Hunyadi, head of the Radicalisation and Extremism Programme at Hungarian think tank Political Capital, told Hatewatch Orbán’s party Fidesz has built “connections to ultraconservative, anti-immigration, anti-gender, populist radical right and even far-right actors across the EU and the US.” Hunyadi assumed Takacs’s speech was meant “to elevate Orbán's image and position” and “deepen the connections with the Republican party.”

During the speech, Takács greeted members of the European Parliament. It is unclear to whom he referred, but members of the ultranationalist European political parties FPÖ (Austrian Freedom Party) and AfD (Alternative for Germany) attended. Members of the World War II Nazi party founded FPÖ, and Germany placed AfD under surveillance for its extremist ties.

Takács “specifically” greeted Greene during his speech. That night, Greene said that if she had organized the Jan. 6, 2021, insurrection, “We would have won. … Not to mention, it would’ve been armed.”

Hungary has cultivated its reputation as an international far-right standard bearer since the campaign for Orbán’s third term in 2013, when the government launched a campaign that depicted Soros-funded organizations as foreign meddling campaigns. As Hungary grappled with the European refugee crisis in 2015, the government portrayed Soros as the mastermind behind a wave of migration meant to change Europe’s demographics.

This is an antisemitic conspiracy theory called the “great replacement.” Hungary helped mainstream the theory across Europe and the U.S. with Soros, who is Jewish, as its mastermind. FOX News host Tucker Carlson has consistently aired the conspiracy theory. Hungary adopted draconian policies meant to close its borders to asylum seekers and punish those who entered, which Carlson has applauded.

By 2018, the refugee crisis subsided, and the Hungarian government began to shift focus to allegations of Soros-funded “gender education.” It disaccredited gender studies programs at the Eötvös Loránd University and the Central European University (CEU), which Soros founded. CEU later left Hungary under legal pressure from the government.

The Mathias Corvinus Collegium (MCC), an education foundation funded by the Hungarian government, invited Carlson and Dennis Prager to speak in 2021. MCC paid Prager but not Carlson, according to contracts Hatewatch obtained through Hungarian public information requests. MCC has also hosted Newsweek opinion editor Josh Hammer, whom Hatewatch has covered as embracing the anti-democracy hard right. Hatewatch has not obtained the agreement between Hammer and MCC.

In October, MCC invited right-wing provocateur Andy Ngo to speak. Hatewatch was unable to locate a recording of the speech, titled “Caught in Extremism.” Hatewatch obtained the contract between MCC and Ngo, which shows MCC did not pay Ngo for his speech. Hatewatch previously reported Ngo received 720 euros from a Polish nonprofit funded by that country’s far-right government for a speech in October 2021. At that time, that equated to approximately $865 in American dollars.

Ngo went on to give softball interviews to foreign minister Péter Szijjártó and Balázs Orbán, the prime minister’s political director and chairman of MCC’s board, about their anti-LGBTQ laws.

Hungary has effectively banned LGBTQ families from adopting children and passed legislation in June 2021 that banned teaching materials that include any mention of LGBTQ identity.

A July report from Political Capital on Hungary’s “anti-gender mobilization” says Hungary’s government has “consciously and strategically instrumentalized” anti-LGBTQ rhetoric and policies for “its party-political goals.”

Ngo did not respond to a request for comment.

At the NYYRC gala, Takács echoed this rhetoric. He said Hungary is a state that recognizes a “father is a man” and a “mother is a woman.” This “genuine” conservative message, he continued, is the “message for the future.”