The Southern Poverty Law Center today filed a federal lawsuit against Mississippi authorities who took a newborn baby from a Mexican immigrant mother and placed the child with a white couple. The SPLC also has appealed an earlier gag order that prohibited the mother and her lawyers from speaking publicly about her family’s ordeal despite the mother’s request to waive confidentiality rules of the youth court.

The Southern Poverty Law Center today filed a federal lawsuit against Mississippi authorities who took a newborn baby from a Mexican immigrant mother and placed the child with a white couple. The SPLC also has appealed an earlier gag order that prohibited the mother and her lawyers from speaking publicly about her family’s ordeal despite the mother’s request to waive confidentiality rules of the youth court.

The lawsuit charges that the Mississippi Department of Human Services (MDHS), two of its employees and an employee of Singing River Hospital in Pascagoula, Miss., violated the constitutional rights of Cirila Baltazar Cruz and her daughter by separating them based on false allegations that MDHS officials failed to properly investigate.

"Mississippi officials and hospital workers conspired to steal Cirila Baltazar Cruz's baby by inventing false charges against her – allegations she couldn't refute because she doesn't speak the right language – and then told her she couldn't talk about it," said SPLC Legal Director Mary Bauer. "This was an outrageous violation of her most fundamental rights, and we're deeply concerned that other mothers in Mississippi might be subjected to the same treatment."

Two days after Baltazar Cruz gave birth to her daughter at Singing River Hospital in November 2008, the child was taken from her amid allegations provided by a hospital employee.  The employee spoke only Spanish to the mother, who speaks limited Spanish and virtually no English. (She speaks Chatino, an indigenous language in Mexico.) In addition, the officials would not allow Baltazar Cruz's cousin to serve as an interpreter despite his offer to do so. Instead, the child was placed in the custody of two Gulf Coast lawyers who frequently practiced law before the youth court judge who approved the removal of the child. 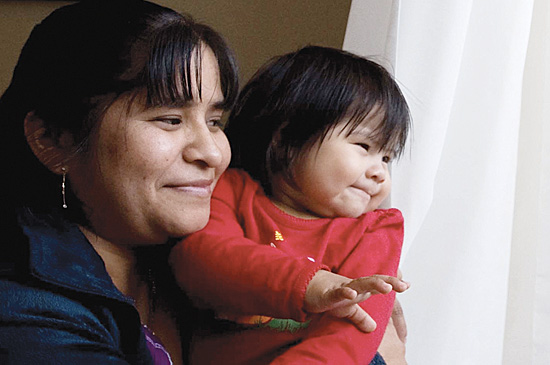 Even after the allegations were found to be false, the MDHS employees named in the lawsuit perpetuated the separation, violating the mother's due process and equal protection rights.

"It was a very painful experience for me and for my baby," Baltazar Cruz said. "This is why I want other people to know, because I don't want anyone else to go through the same experience."

Baltazar Cruz was reunited with her daughter in November 2009 shortly after an investigation by the U.S. Department of Health and Human Service's (HHS) Office for Civil Rights and Administration for Children and Families. A letter from the HHS to the executive director of the Mississippi DHS noted that the state failed to comply with several requirements under federal law and regulations. Among the failures cited by HHS are that reasonable efforts were not made to prevent the child's removal or to place the child with relatives. The agency also found that the MDHS "failed to take reasonable steps to ensure effective communication" with Baltazar Cruz.

The letter concluded that the federal agency has "grave concerns" about the case, saying, "The MDHS staff interviewed did not see these issues as problematic. This leads us to conclude that this may be how business is conducted and that this is not an isolated incident."

As a result of the earlier gag order, the lawsuit was filed under seal in the U.S. District Court for the Southern District of Mississippi, Jackson Division.

The SPLC is asking the federal court to allow the suit to be made public in its entirety and has also appealed the youth court's gag order to the Mississippi Supreme Court.

"This lawsuit is about ensuring the law is enforced equally in Mississippi and that the rights of the most vulnerable are protected," said SPLC attorney Michelle Lapointe. "That didn't happen in this case, and as a result this young mother suffered the traumatic separation from her child for the baby's entire first year."