Some 1,500 supporters gathered at the SPLC's Montgomery, Ala., office to celebrate the organization's 40th anniversary and look ahead to the challenges of the future. They came from across the country – a community of people united in their commitment to equality and justice and dedicated to pursuing those ideals through the SPLC and in their own lives.

Forty years may have passed since the founding of the Southern Poverty Law Center, but for Evelyn Green-Frierson – a descendant of legendary abolitionist Harriet Tubman – its work is as vital as ever.

"It is very disturbing that we live in a country today where we have freedom but still there are individuals [and] hate groups that are trying to hold different groups back because of race, because of class, because of gender," Green-Frierson said. "It is unbelievable."

"So, we need organizations like the Southern Poverty Law Center to fight for our cause and to continue the cause that Dr. Martin Luther King had fought for so long – for us to have freedom."

That cause – that continuing fight for justice – was what drew some 1,500 passionate supporters to the SPLC's 40th anniversary celebration in Montgomery, Alabama, on April 29-30. 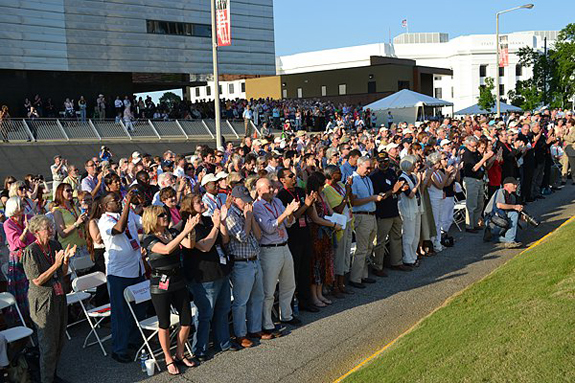 SPLC supporters at the closing session of the 40th Anniversary Celebration.

They traveled from as far away as Alaska and Hawaii, many who had supported the SPLC for decades. They packed into local churches and other venues to learn about the organization's landmark achievements and hear about the challenges that lie ahead. They exchanged ideas with SPLC lawyers on the cutting edge of social justice litigation. They sat in reverence in the Dexter Avenue Baptist Church, where Dr. King in the 1950s helped launch the Montgomery bus boycott that sparked the civil rights movement. They shook hands with civil rights icons like Julian Bond, the SPLC's first president.

And they shared moments of laughter and tears, a community of people united in their commitment to the ideals of equality and justice and dedicated to pursuing those ideals in their own lives.

For many, the anniversary was not only an opportunity to honor the SPLC's history but also a time to reflect on the challenges of the future. Jim Fisher, who came from Chicago with wife, Gail Brown, said that though strides have been made for equality, there is still much work to be done. He said he was particularly upset that more than two years into President Obama's term, the nation's first black president felt the need to produce his birth certificate to prove his legitimacy to hold office.

"I'm very saddened by it and that's one of the many reasons I'm here," he said. "I just feel it's necessary to stand up." 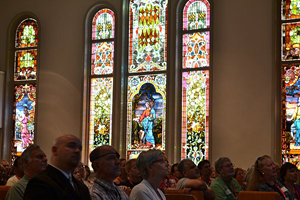 Visitors gather in the Dexter United Methodist Church for a session during the SPLC's 40th Anniversary Celebration.

Bill Norton and his daughter, Therese, traveled from Seattle to the event as a way to celebrate her passing the bar exam, a milestone in a future law career inspired by her passion for social justice. "As far as I'm concerned, this is the premier legal-oriented organization in the country for social justice," Norton said.

Verdell Beasley of Huntsville, Ala., attended the event with family members. As a black woman married to a white man, she feels a deep personal connection to the SPLC's fight against bigotry. "I probably would have never been able to marry my husband [without a more tolerant society]," she said.

As the celebration began Friday morning, SPLC co-founder Joe Levin joined other staffers who heard a special anniversary greeting from a class of 18 second-graders at Notre Dame Elementary in Portsmouth, Ohio. With the help of an Internet video connection, the students told of actions they are taking to make the world a better place. The children also sang "It Could be a Wonderful World" from Teaching Tolerance's music project "I Will Be Your Friend: Songs and Activities for Young Peacemakers."

"We are so proud of all that you have done, not only in the vein of law but all the wonderful educational materials that you produce for all of us teachers all across America," said teacher Wanda Dengel. "Those [Teaching Tolerance] materials have helped us to create young peacemakers not only in our classrooms but in our schools, our families and our communities all across America." 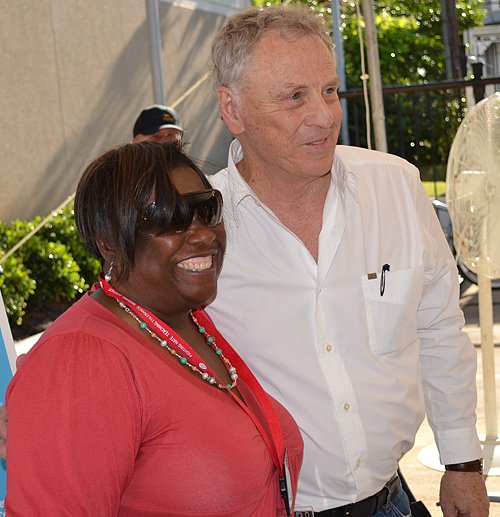 SPLC founder Morris Dees and an SPLC supporter pose for a photo during Friday's events.

Speaking to a crowd of more than 1,000 seated in front of the Civil Rights Memorial, SPLC co-founder Morris Dees reflected on starting the organization with Joe Levin in 1971 and its success over four decades.

"Never would I have dreamed, nor would Joe Levin behind me have dreamed, when we started the Southern Poverty Law Center in a small office down the street – the two of us and a secretary – that I'd be standing here today in front of this magnificent structure with programs that reach all across the United States and the world with you sitting here who have all made it possible," Dees said. "Thank you so very much."

Since its founding, the SPLC has shut down some of the nation's most dangerous hate groups by winning multimillion-dollar jury verdicts on behalf of victims of their violence. It has dismantled institutional racism in the South, reformed juvenile justice practices, shattered barriers to equality for women, children and the disabled, and protected low-wage immigrant workers from abuse. It has reached out to the next generation with Teaching Tolerance, a program that provides educators with free classroom materials that teach students to respect others.

The landmark legal work was part of a promise Dees and Levin made to their earliest supporters in 1971: They would bring cases that transform society.

"I like to think that when we made that commitment so long ago – and repeatedly over these last four decades – that we not only met your expectations but exceeded them," Levin told supporters. "What's happened has certainly exceeded mine."

The event also focused on the work ahead. As the changing demographics of the country are fueling xenophobia and the growth of hate groups, the SPLC remains dedicated to pursuing social justice, said SPLC President Richard Cohen. As he spoke to supporters who gathered for the opening presentation, he issued a pledge that echoed King's famous paraphrase of Amos 5:24, which is etched in the black granite of the Civil Rights Memorial built by the SPLC at its Montgomery office.

"I promise you that when people cross that line between hate and hurt, when there are people out there who have no other champions, we will be there for them," Cohen said. "And no matter what the risk to Morris – no matter what the risk to any of us – with your help, standing together, we will be there until justice rolls down like waters and righteousness like a mighty stream." 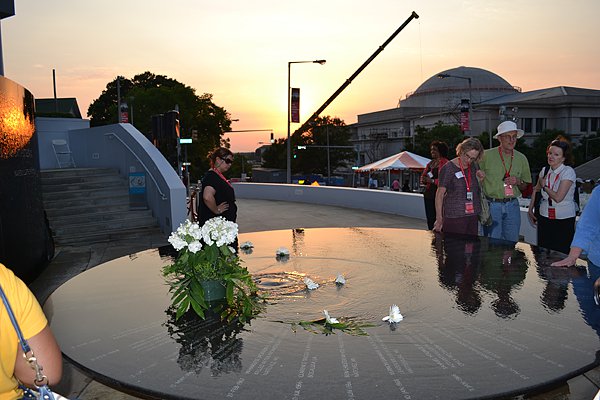