The lawsuit was filed on behalf of five students who have faced severe anti-LGBT bullying and harassment in school. It charges that the district’s gag policy perpetuates the abuses suffered by these students and others.

The groups filed suit in the U.S. District Court for the District of Minnesota after the school district failed to address the persistent abuse or repeal its discriminatory policy.

“We are disappointed that the district fails to see the serious harm this policy is causing its students,” said Sam Wolfe, the SPLC’s lead attorney in the case. “School and district officials who are entrusted with the safety and education of all students continue to ignore, minimize, dismiss and even blame victims for the abusive behavior of other students.” 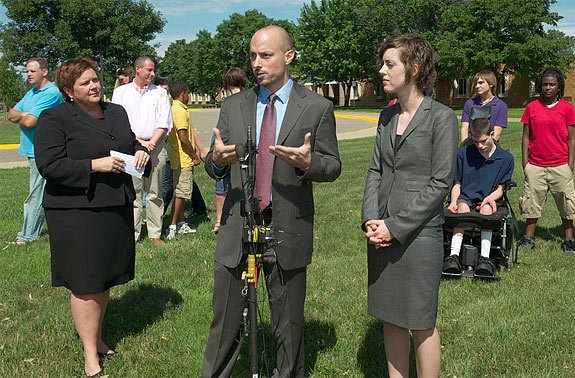 The lawsuit charges that LGBT students and students perceived as LGBT were subjected to anti-LGBT slurs on a daily basis and were physically threatened or attacked by peers. While many of these abuses occurred in front of teachers or were reported to school officials, school personnel almost always took insufficient action to stop the abuse.

“There is something seriously wrong in the Anoka-Hennepin School District, and district officials know it,” said NCLR Executive Director Kate Kendell. “In school after school, kids who are perceived as gay are harassed mercilessly until they drop out, melt down or lash back. This epidemic of harassment – unlike anything we’ve seen in neighboring districts – is plainly fueled by the district’s shameful and illegal policy singling out LGBT people and LGBT people alone for total exclusion from acknowledgement within the classroom.”

The lawsuit comes a day after Anoka-Hennepin officials denied any responsibility for the severe and pervasive harassment suffered by LGBT students. It was also reported on Wednesday that the district is at the center of an investigation by the U.S. Department of Justice and the U.S. Department of Education’s Office of Civil Rights into reports of anti-gay bullying.

The lawsuit describes numerous incidents of harassment, including the following:

Jeff Frei, the father of one student who was persistently bullied, said: “Our son has a right to go to school every day feeling safe and accepted. This is a basic right that every child has. His older sister shouldn’t have to spend an hour waiting outside his school so she can walk him home to make sure he gets there safely. We cannot go through another school year of this and we cannot lose any more of our young people to this. Enough is enough.”

The school district’s gag policy, known officially as the “Sexual Orientation Curriculum Policy,” prohibits staffers from offering support to LGBT students or acknowledging the existence of LGBT people. It has played a significant role in encouraging the hostile climate by stigmatizing LGBT students – casting them as pariahs not fit to be mentioned within the school community, a message that comes across loud and clear both to LGBT students and their harassers. It has also limited the effective responses that teachers can provide when they see anti-LGBT harassment taking place.

The lawsuit asserts that the district’s gag policy and its failure to protect these students violates their rights under the U.S. Constitution, Title IX and the Minnesota Human Rights Act.

The SPLC and NCLR began investigating the district’s policies in 2010 after several LGBT students from the district died by suicide.