“These courageous students have come an incredible distance – from having suffered as victims of severe harassment at school because they are gay or perceived as gay to a place of empowerment after taking a stand for the dignity and rights of students everywhere,” said SPLC lawyer Sam Wolfe.

Wolfe led an investigation of the school district following a string of tragic suicide deaths and helped lead the ensuing litigation. 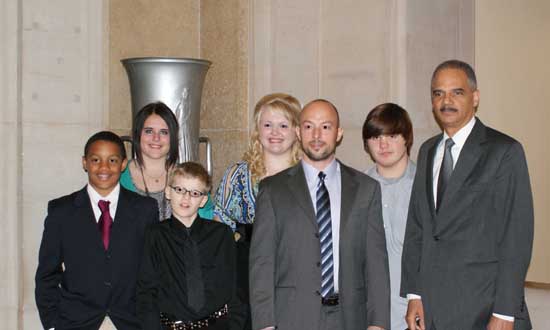 Five of the students are in Washington to receive the award at DOJ Pride’s annual LGBT Pride Month program in the Great Hall of the Main Justice Building.

The students were plaintiffs in an SPLC lawsuit against the Anoka-Hennepin School District that was resolved in March with the adoption of a wide-ranging plan to stop anti-LGBT harassment.

“Through our legal action, which was complemented by an intervening lawsuit by DOJ lawyers also present at today’s ceremony, we’ve sent a clear message to school districts around the nation that they must take seriously their obligation to protect students – including LGBT and gender nonconforming students – from harassment at school,” Wolfe said.

The SPLC and its co-counsel sued the school district in July 2011 for failing to take effective measures to counter a hostile anti-LGBT climate that resulted in students who are gay or perceived as gay being tormented daily with slurs and physical assaults. A gag policy that required staff “neutrality” on issues relating to sexual orientation hindered teachers from effectively intervening and speaking out against such bias and abuse.

“I never expected to receive an award in the nation’s capital,” said 15-year-old Brittany Geldert, who joined the lawsuit after suffering abuse and losing a close friend, who was also harassed, to suicide.

“I told my lawyer at the beginning that I was willing to do whatever it takes, including, if helpful, shouting from rooftops or putting my face on billboards, in order to help prevent the kind of tragedy my school district has faced,” Geldert said. “We’ve succeeded in making a lot of progress and I’m honored to come to Washington for the first time to receive this award with my friends.”

The other students are Kyle, Damian, Dylon, Ebonie and Kyrstin.

The consent decree reached in March is the most far-reaching ever in a safe-schools case. Among many features, it requires comprehensive training for all students, teachers and school officials. The legal action also resulted in the gag policy being replaced with a policy mandating a respectful learning environment for all students. The DOJ and the U.S. Department of Education will monitor the district for the next five years to ensure compliance.

DOJ Pride, an association of LGBT employees at the Justice Department, awarded the students the Gerald B. Roemer Community Service Award for their service to the LGBT community. The award was established in 1998 to honor the life of Gerald B. “Jerry” Roemer, who died in 1997. After Roemer was diagnosed with HIV, he demonstrated courage and hope by completing law school and a distinguished career with the DOJ. The award is presented annually to recognize individuals who have made significant contributions to the LGBT community.

The SPLC is dedicated to defending the rights of the LGBT community. The SPLC works to ensure a safe and respectful learning environment for all students – including LGBT and gender nonconforming students – through educational campaigns and legal action.