A homeless U.S. Army veteran sought to attend federally funded job training courses at a ministry in North Carolina but discovered she wasn't allowed to attend courses offered to men. Instead, she was offered training in such things as knitting, art therapy and yoga. The SPLC filed a discrimination complaint of behalf of her and other female veterans.

Emily Bagby simply wanted a chance to learn some job skills that would help her re-enter the civilian workforce.

A U.S. Army veteran, Bagby turned to the Asheville Buncombe Community Christian Ministry in North Carolina for help when she found herself homeless during a period of unemployment. The organization receives money from the federal government to provide job training programs and other classes for veterans.

But Bagby wasn’t allowed to take the courses that actually might help her find a job. She discovered, in fact, that the ministry didn’t allow female veterans to take the same classes offered to men, such as truck driving, culinary arts and training for “green” jobs. Instead, the women were offered training in such things as knitting, art therapy, yoga, meditation, how to de-clutter your room, self-esteem and Bible study. 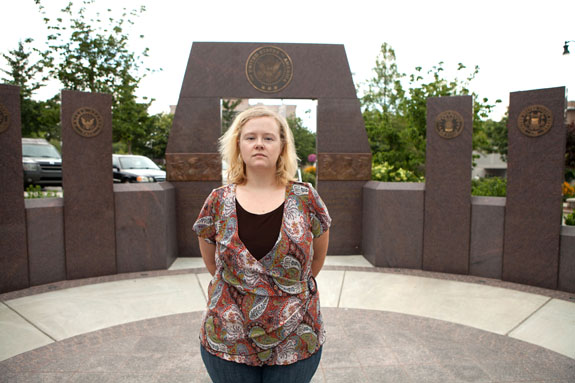 “I am asking that female veterans have the same opportunities to better themselves as the men,” Bagby said. “Women had to fight for equality in the military. We shouldn’t have to fight for it as civilians.”

By failing to provide the same services to these veterans, the organization is discriminating on the basis of gender, violating the nondiscrimination and equal opportunity provisions of the Workforce Investment Act administered by the Department of Labor.

“Asheville Buncombe Community Christian Ministry’s discriminatory policy is insulting and demeaning to all female veterans,” said Christine P. Sun, deputy legal director for the SPLC. “These women served their country, just like male veterans, and are entitled to the same dignity and respect. The classes offered to the female veterans seem like they are designed to help them become better housewives, not become independent like the job training offered to the men."

During a March 14 hearing before the U.S. Senate Committee on Veterans’ Affairs, the ministry’s executive director, the Rev. Scott Rogers, said that his organization helped place more than 300 veterans into the workforce last year.

Bagby lived at the Steadfast House from July 2011 to February 2012 after she found herself homeless during a period of unemployment. In addition to the lack of real job training, she did not receive any meaningful assistance with obtaining social services, applying to school or obtaining employment or permanent housing. Bagby left Steadfast without the skills needed for future employment and self-sufficiency.

By denying women access to the job training and educational opportunities, the ministry is exacerbating existing barriers for female veterans, who are already four times more likely than their civilian counterparts to experience homelessness. According to the U.S. Interagency Council on Homelessness, this is occurring because female veterans are unable to achieve access into the labor market. Female veterans often experience a lack of job training and skills assessments, and difficulty transferring the skills obtained while in the military to the civilian economy.

The Asheville Buncombe Community Christian Ministry, which provides services to veterans, the homeless and families in poverty, is composed of approximately 300 churches in Asheville and Buncombe County, N.C. It received funding from the Department of Labor’s Veterans Workforce Investment Program and the Homeless Veterans Reintegration Program, and recently received $200,000 from the Department of Labor to help reintegrate homeless veterans into the civilian workforce through job training and other services in 2012.

Other attorneys on the case include SPLC senior staff attorney Eden Heilman and Meghann K. Burke of the law firm Cogburn & Brazil in Asheville, N.C.