An SPLC lawsuit seeks to overturn Alabama laws that prevent the recognition of legal, same-sex marriages from other states. 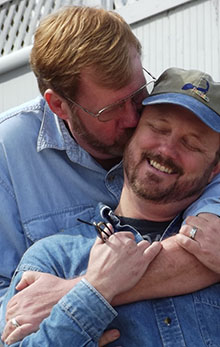 Paul Hard rushed to the hospital after learning that his husband had been in a car wreck. He sent a text message to other family members: “David in wreck, in the ER, Pray.”

When Hard arrived at the hospital, a receptionist refused to give him any information about his husband, David Fancher. He was told he was not a member of Fancher’s “family” and that gay marriages weren’t recognized in Alabama.

After a half hour of inquiries, a hospital orderly finally told Hard, “Well, he’s dead.” Paul’s knees fell out from under him. He reached out for support, but the orderly stepped away.

The indignity didn’t stop at the hospital.

A funeral home director cited Alabama law in insisting that the death certificate indicate Fancher was never married – even though Fancher and Hard were legally married in Massachusetts, but lived in Alabama.

Since the 2011 wreck, these Alabama laws that refuse to recognize same-sex marriages from other states continue to create legal obstacles for Hard as he sues over the wrongful death of his husband. The SPLC announced a federal lawsuit today challenging these laws.

The lawsuit, filed on Hard’s behalf in the U.S. District Court for the Middle District of Alabama, seeks to overturn the state’s Marriage Protection Act, a 1998 law that bans the recognition of same-sex marriages from other states, and the Sanctity of Marriage Amendment, which enshrined this ban in the constitution in 2006.

The suit also demands that Hard receive his rightful share of the proceeds from a pending wrongful death suit, and that Alabama issue a corrected death certificate for Fancher that lists Hard as the surviving spouse.

“Alabama has created two classes of marriages within its borders and deemed one of those classes – marriages between people of the same sex – to be inferior to the other,” said David C. Dinielli, SPLC deputy legal director. “This is unconstitutional."

“The only purpose of refusing Paul the right to share in the proceeds from the wrongful death lawsuit is to punish him for having married a man, and to express moral disapproval of this choice. These purposes are improper and unconstitutional. Alabama must treat its LGBT citizens with equal dignity and respect under the law.”

Hard and Fancher were married in Massachusetts in May 2011, and Fancher died in a Prattville, Ala., hospital the following August while the two were living in Montgomery. Hard is now suing the trucking companies involved in the wreck. Fancher had collided in the dark with a large truck strewn across the northbound lanes of Interstate 65 north of Montgomery.

In Alabama, however, proceeds from a wrongful death case must be distributed pursuant to the laws of intestate succession (even though Fancher died with a will and Hard was the sole beneficiary). And because Alabama refuses to recognize lawful same-sex marriages entered out of state, current state law means that Hard cannot be deemed the surviving spouse and cannot share in the proceeds of the lawsuit.

“Southerners are generally good-hearted people and will recognize when a person is being unfairly treated in life’s worst moments,” said Hard, a lifelong Alabamian who once was a Baptist preacher. “Most married couples take for granted that if tragedy strikes they can proceed through the worst of times without the state saying at every turn that their marriage doesn’t even exist. Marriages are significant, and my marriage is due the same respect as any other.”