The schools recognized today by the SPLC created their own unique and exemplary activities to help break down social barriers and foster respect among students. 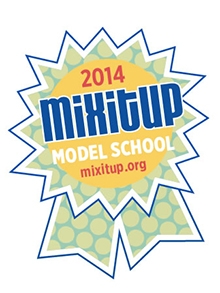 At Eastwood Knolls International School, students began their celebration of Mix It Up at Lunch Day with a small – but important – strip of paper.

The color of the paper determined where a student would sit for lunch at the El Paso, Texas, school. After the students at a table got to know each other over lunch, they were asked to write one new thing they learned about a tablemate on the strip of paper.

The strips of paper then were linked together to form a chain that was displayed in the cafeteria with a poster declaring, “We ALL have a common link!”  Eastwood Knolls is one of 76 schools recognized today by the SPLC’s Teaching Tolerance project for its exemplary efforts to foster respect and understanding.

“In today’s polarized world, it’s refreshing to see schools that are doing extraordinary things to encourage students, faculty and staff to cross the social boundaries that so often divide us,” said Maureen Costello, director of the SPLC’s Teaching Tolerance project. “By recognizing these schools and calling attention to their great work, we hope that other schools will follow their lead.”

The program helps break down the barriers among students so there are fewer misunderstandings that can lead to conflicts, bullying and harassment.

“I learned how four people are very different from each other but that also we can have things in common, too,” said a student at Crete-Monee Middle School, a model school in University Park, Ill.

A sampling of the model schools shows they have taken their own unique approaches to promoting the Mix It Up message:

But regardless of the approach taken by a school, the goal of fostering respect and understanding was the same.

Teaching Tolerance’s Mix It Up at Lunch Day program began in 2002. Many schools plan activities for the entire day, and some schools use the event to kick off a yearlong exploration of social divisions.

Mix It Up at Lunch Day for the 2014-2015 school year will be held Oct. 28. Teaching Tolerance offers an array of free online resources to help school groups and teachers explore the issue of social boundaries and plan their event. Each school sets its own agenda and chooses its own theme.

Teaching Tolerance is dedicated to reducing prejudice, improving intergroup relations and supporting equitable school experiences for our nation’s children. The program reaches hundreds of thousands of educators and millions of students annually through its Teaching Tolerance magazine, multimedia teaching kits, online curricula, professional development resources and classroom-friendly social justice documentaries. These materials are provided to educators at no cost.