After a rash of racist incidents in a small Washington town, the local school superintendent turned to the SPLC and its Teaching Tolerance project for help. 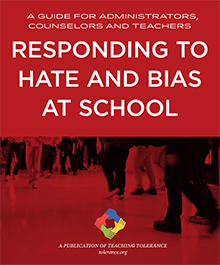 Dayton is a picturesque little burg tucked in the southeastern corner of Washington state. With just over 1,000 families, it is 93 percent white.

When racist incidents began last fall, one after another, the community became nervous. No one was more unsettled than Dayton School District Superintendent Douglas Johnson. The people on his campuses were directly affected by the threat.

Early one morning last November, just as students were settling into the routine of a new academic year, a teacher found a swastika burning on the grass outside Dayton Elementary School. That came a week after Halloween, when  another teacher, who is African American, had three trick-or-treaters come to his door dressed as members of the Ku Klux Klan. At least one was a student in Johnson’s district.

Then, less than three weeks later, someone posted a threatening note at the entry to Dayton High, forcing a two-hour delay in school. The threat added to the fear that was building in Dayton.

Johnson knew he had to address the racism and help his students explore issues of diversity.

First, he turned to Lecia Brooks, director of outreach and the Civil Rights Memorial Center at the Southern Poverty Law Center. After their conversation, the SPLC supplied Johnson with copies of Responding to Hate and Bias at School, a teacher’s guide that provides a compassionate but firm response to bigotry. Some additional advice and encouragement soon followed from Teaching Tolerance Director Maureen Costello.

“Johnson is the kind of school leader our nation’s children need,” said Costello. “He’s committed to diversity and to opening children’s hearts and minds to difference. We’re delighted to be working to support him.”

After handing out the guides to teachers, Johnson kept digging for other opportunities to address issues of diversity and bias.

“It was still apparent to me – despite no more incidents – that we still need to provide these kids with educational opportunities on diversity,” he said. “We are their educators. We are who they’re with 180 days a year. I believe it is our responsibility as teachers to provide these important lessons.”

In January, Johnson attended a summit on civil rights education at nearby Whitman College. There, he discovered another opportunity to work with Teaching Tolerance.

After a 2011 SPLC report listed the state of Washington as failing to adequately teach students about the civil rights movement, Whitman College reached out to Teaching Tolerance and, through an innovative collaboration called Whitman Teaches the Movement, created a program that provides schools with volunteer student teachers and creative lessons about the movement.

Kicking off the program’s third year, the summit provided Johnson with even more resources to help students in his district learn how to understand and engage with difference.

“We are a small community of mostly white farmers,” Johnson said during the summit. “There are a lot of things they’re missing on a personal level about the civil rights movement.”

Johnson’s next step was to send several busloads of Dayton students to Whitman for lessons taught by college students.

“It was an opportunity to get people’s attention,” he said.

As teachers begin their summer planning for next year, Johnson continues to seek out resources like those provided by Teaching Tolerance to help prepare students for a more diverse society.