It was 1988, and the founder of the Southern Poverty Law Center was speaking at an NAACP meeting following the SPLC’s $7 million verdict against the United Klans of America. The case, which stemmed from the lynching of a black teen in Mobile, Ala., would mark the end of a Klan group responsible for some of the most heinous murders of the civil rights era.

During his speech, Dees recited the names of activists and others murdered by white supremacists during the civil rights movement.

Afterward, a young member of the audience approached him and asked about the people he had named.

Others wanted to know, too.

People gathered around Dees as he gave an impromptu history lesson. Driving home that night, he decided that the SPLC should build a monument to the martyrs of the movement so their sacrifices would never be forgotten.

Maya Lin, creator of the Vietnam Veterans Memorial, was commissioned to design the monument. Lin found her inspiration in the words "until justice rolls down like waters and righteousness like a mighty stream," a paraphrase from the Book of Amos that Dr. Martin Luther King Jr. used in his "I Have a Dream" speech and at the start of the Montgomery bus boycott. 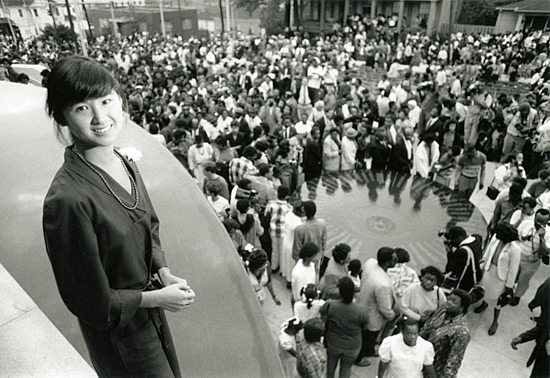 "The minute I hit that quote I knew that the whole piece had to be about water," Lin said. "I realized that I wanted to create a time line: a chronological listing of the Movement's major events and its individual deaths, which together would show how people's lives influenced history and how their deaths made things better."

The SPLC researched deaths during the era considered to be the modern-day civil rights movement – from May 17, 1954, the day the U.S. Supreme Court outlawed school segregation, until April 4, 1968, when Dr. Martin Luther King Jr. was assassinated.

Selected were victims who fit at least one of three criteria: They were murdered because they were active in the movement; they were killed as acts of terror aimed at intimidating blacks and civil rights activists; or, their deaths, like that of Emmett Till, helped galvanize the movement by demonstrating the brutality faced by African Americans in the South.

The research yielded 40 names. They ranged in age from 11 to 66. Eight were white, and 32 were black. They came from all walks of life – students, farmers, ministers, truck drivers, a homemaker and a Nobel laureate.

“Each name is a history lesson, and we are saying, don’t just think of the deaths, but think of a movement of ordinary people who just got tired of injustice,” Dees told The New York Times in 1989.

Their names were inscribed on a circular, black granite table that chronicles the history of the movement in lines that radiate like the hands of a clock. Lin left a blank space between the first and last entries on the memorial timeline – to signify that the struggle for human rights began well before 1954 and continues to this day.

Water emerges from the table’s center and flows smoothly over the top. Behind it, water cascades over a curved black granite wall. Engraved on the wall are words from the Bible’s Book of Amos that King paraphrased on several occasions: “…until justice rolls down like waters and righteousness like a mighty stream.”

Six thousand people gathered in Montgomery on Nov. 5, 1989, to witness the dedication of the memorial, situated just around the corner from the historic Dexter Avenue Baptist Church, where Dr. King helped launched the Montgomery Bus Boycott in 1955. 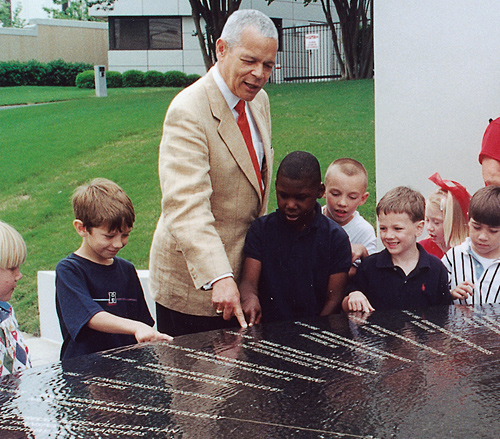 The SPLC’s first president, Julian Bond, spoke of the martyrs’ sacrifices but also reminded the crowd they had not gathered in sorrow.

“(The martyrs) gave an equal measure of devotion so that all of us might be free,” said Bond. “Buried with each is a bit of American apartheid, for their deaths kept the movement marching on. That is why we honor them today not in sorrow, but in celebration.”

Relatives of the martyrs filled the crowd, representing 39 of the 40 names. Several were among the speakers: Rita Schwerner Bender, widow of Michael Schwerner; Mamie Till Mobley, mother of Emmett Till; Chris McNair, father of Birmingham bombing victim Denise McNair; and Myrlie Evers, widow of Medgar Evers. Ethel Kennedy, the widow of Robert Kennedy, was also present.

“Poetry in granite,” was how Carolyn Goodman described the memorial to the Associated Press in 1989. Her son, Andrew Goodman, who was shot to death during Freedom Summer in 1964, is included among the martyrs.

“Nobody who sees it cannot feel that it’s a moving, moving piece of art,” Goodman said. “It brings that period so vividly alive that you can almost relive it.”

The sentiment was echoed by Mobley, who described in her autobiography the experience of touching her son’s name on the Memorial.

“It was like touching my son. Like reliving his funeral,” she wrote in Death of Innocence. “But, as I told people there, it also filled me with such joy to see Emmett honored, to see him included among the martyrs of the movement.”

An ‘instrument of  justice’

The research conducted for the Civil Rights Memorial went beyond preserving the stories of slain martyrs; it helped revive decades-old civil rights cold cases. At the time of the dedication, most of the family members in attendance still waited for justice for the killing of their loved one. Since the dedication, authorities in several Southern states have re-examined these killings, leading to arrests and convictions in several of the murders documented on the memorial.

The stories of the martyrs were compiled by the SPLC and published in the book Free at Last to provide accounts of the crimes – in many cases still unsolved – that were fading from memory.

For one Mississippi journalist, the book became a guide as he dedicated his career to investigating civil rights-era cold cases. The research, including files on 75 other suspicious deaths of the era, also has been used by a special FBI unit dedicated to solving cold cases from the era.

“The Memorial stands as a reminder that the martyrs’ killers walked free, even though everyone knew they were guilty,” said Jerry Mitchell, an investigative reporter at The Clarion-Ledger in Jackson, Miss. “After it was dedicated in 1989, it transformed into an instrument of justice.”

Free at Last was a rich resource for Mitchell – “my road map on my journey into reinvestigating these cases,” he said.

Mitchell’s extensive reporting has led to several successful prosecutions of civil rights cold cases. He was the keynote speaker at the dedication of the Civil Rights Memorial Center in 2005.

Each year, more than 20,000 visitors from around the world visit the memorial.

Civil rights activists from Europe, Africa, Asia, the Middle East and Latin America have found inspiration at the site. Others have included the memorial as a poignant part of their vacation or family reunion. Students of all ages visit to learn about the movement. And since 1998, the Congressional Civil Rights Pilgrimage has brought nearly 150 members of Congress to the memorial as part of an annual tour of historic civil rights sites.

In 2005, the SPLC added the Civil Rights Memorial Center, further transforming the site into more than a commemoration of the past. The visitor center, housed in the SPLC's former office, includes interactive exhibits and a powerful 20-minute film – “Faces in the Water” – about the martyrs and the movement.

It also recognizes current struggles for equality and offers visitors an opportunity to pledge their commitment to justice and equality by adding their name to the Wall of Tolerance. It is another example of how the memorial and visitor’s center have become a sacred site and a powerful teaching tool for all who visit. It keeps alive the dreams of those who died during the civil rights movement and inspires those who still dream of a better world – fulfilling the vision Dees and the SPLC hoped to achieve with a memorial dedicated to those who died for social justice.