On September 30, 2016, the Alabama Court of the Judiciary suspended Alabama Chief Justice Roy Moore for the remainder of his term for defying federal court rulings in regard to same-sex marriage. It was the culmination of a judicial career spanning 25 years in which he often put his personal views above the law and the U.S. Constitution, frequently bringing religion into the courtroom and basing judicial opinions on his Biblical beliefs. He was also removed from office in 2003 for disobeying a federal court order to remove a granite monument to the Ten Commandments from the state judicial building. Here is a timeline of events:

Moore in front of the Ten Commandments plaque, 1997. (AP/Gadsden Times)

1992 – Alabama Gov. Guy Hunt appoints Roy Moore as circuit judge in Etowah County. He hangs a wooden Ten Commandments plaque, which he had carved years earlier, behind the bench in his courtroom.

March 1995 – The ACLU sues Moore, claiming his Ten Commandments plaque and courtroom prayers are unconstitutional. The suit is dismissed because the plaintiffs lack standing.

April 1995 – The state of Alabama files suit in state court to seek a declaratory judgment that Moore’s display of the Ten Commandments is constitutional. The suit is later dismissed by the Alabama Supreme Court on technical grounds.

1999 – Moore announces campaign for Alabama chief justice, vowing to return “God to our public life and restore the moral foundation of our law.”

Nov. 7, 2000 – After campaigning as the “Ten Commandments judge,” Moore wins election as Alabama chief justice. He begins designing a monument that depicts, in his words, “the moral foundation of law.”

July 31, 2001 – Under cover of night, Moore unilaterally has a 5,280-pound, granite monument to the Ten Commandments installed in the rotunda of Alabama’s state judicial building. At a press conference the next day, he declares, “May this day mark the restoration of the moral foundation of law to our people and the return to the knowledge of God in our land.”

Oct. 30, 2001 – The Southern Poverty Law Center sues Moore (Glassroth v. Moore) for violating the constitutional principal of separation of church and state. The case is consolidated with another filed by the ACLU and Americans United for Separation of Church and State.

Feb. 15, 2002 – In a concurring opinion in a child custody case, Moore suggests that the state would be justified in executing gay men and lesbians to protect children. His opinion contains numerous citations to the Bible.

Nov. 18, 2002 – U.S. District Judge Myron H. Thompson rules that the placement of Moore’s monument violates the establishment clause of the First Amendment, writing that it created “a religious sanctuary within the walls of a courthouse.” He orders Moore to remove it within 30 days. The order is stayed pending Moore’s appeal.

December 2002 – Moore founds the Foundation for Moral Law in Montgomery, Alabama. Its website currently says the foundation “exists to restore the knowledge of God in law and government and to acknowledge and defend the truth that man is endowed with rights, not by our fellow man, but by God!”

July 1, 2003 – The U.S. Court of Appeals for the Eleventh Circuit affirms Judge Thompson’s ruling in Glassroth.

Aug. 21, 2003 – Because Moore refuses to follow the court order, the eight other justices on the Alabama Supreme Court order the Ten Commandments monument removed from the judicial building. 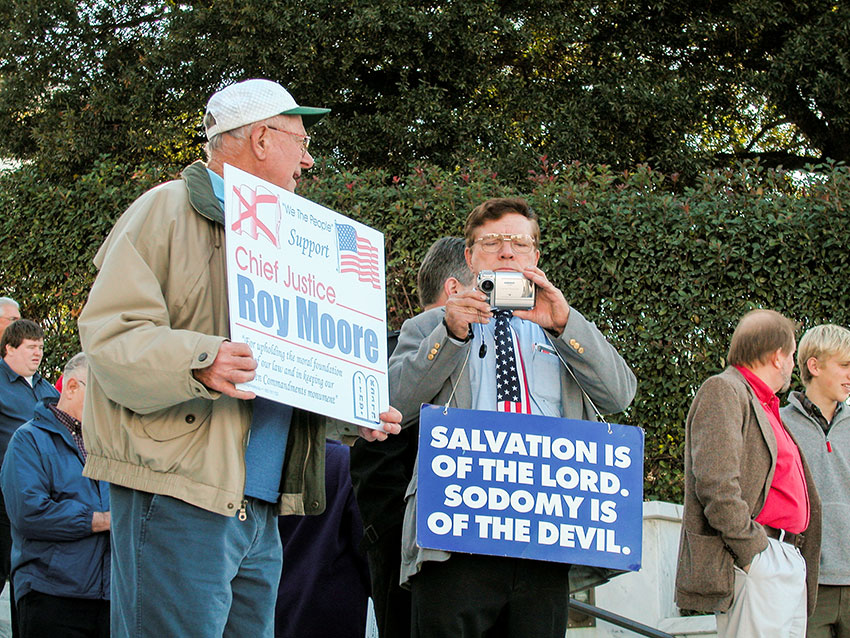 Aug. 22, 2003 – Acting on an ethics complaint filed by the SPLC, the Alabama Judicial Inquiry Commission charges Moore with violating the state’s Canons of Judicial Ethics by refusing to follow the federal court order. He is automatically suspended from office pending a trial before the Court of the Judiciary.

Aug. 27, 2003 – The Ten Commandments monument is removed from the rotunda of the judicial building and into a side room.

Nov. 12, 2003 – The ethics case against Moore is tried in the Alabama Court of the Judiciary. Numerous exhibits are presented, but Moore is the only witness.

Nov. 13, 2003 – The Alabama Court of the Judiciary issues an order removing Moore from office, writing that he “not only willfully and publicly defied the orders of a United States district court, but upon direct questioning by the court he also gave no assurances that he would follow that order or any similar order in the future.”

Jan. 27, 2015 – In a letter to Alabama Gov. Robert Bentley on Alabama Supreme Court letterhead, Moore questions the authority of the federal judiciary to overturn state law. He urges the governor and the state’s 68 probate judges to enforce the state’s same-sex marriage ban. 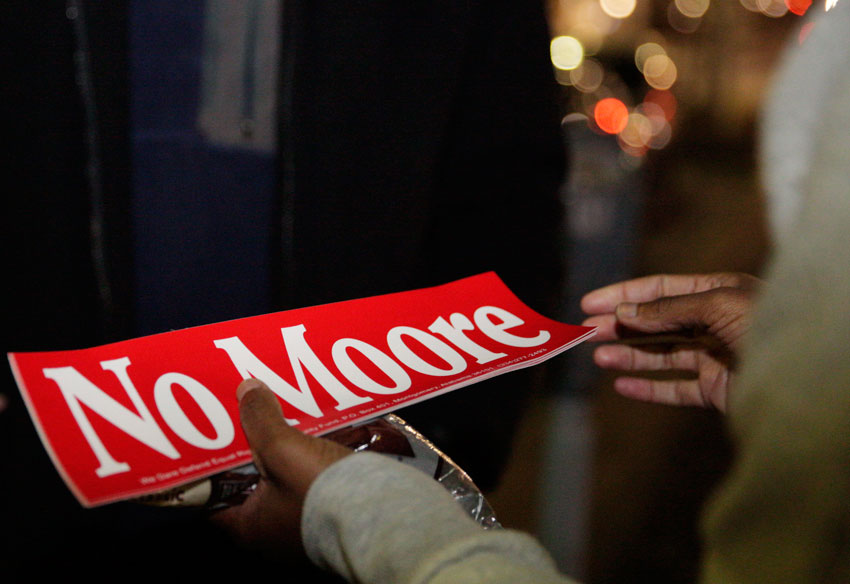 A marriage equality supporter at a rally, 2015. (AP Images)

Jan. 28, 2015 – The SPLC files an ethics complaint against Moore with the Alabama Judicial Inquiry Commission. It alleges that Moore has committed numerous ethics violations by encouraging state officials and judges to defy the federal judiciary.

Jan. 28, 2015 – Judge Granade clarifies her order in Strawser, saying it applied only to the parties in the case but that state agents who choose not to follow the ruling are subject to litigation and attorney’s fees.

Feb. 3, 2015 – The U.S. Court of Appeals for the Eleventh Circuit declines to stay Judge Granade’s order.

Feb. 3, 2015 – Moore sends a letter to the state’s 68 probate judges advising them to uphold the ban on same-sex marriage.

Feb. 3, 2015 – The SPLC files a supplement to its ethics complaint against Moore, citing his statement on a radio show that he might not comply with a U.S. Supreme Court ruling legalizing same-sex marriage.

Feb. 8, 2015 – Moore orders the state’s probate judges not to issue marriage licenses to same-sex couples, despite a federal court order set to take effect the next day.

Feb. 12, 2015 – Judge Granade, in Strawser, again holds as unconstitutional the state’s denial of marriage licenses to same-sex couples. She enjoins the Mobile County probate judge from refusing to issue licenses.

May 21, 2015 – Judge Granade certifies Strawser as a class action, so that it applies to all same-sex couples affected by the state ban and, significantly, to all probate judges in the state. She enjoins all Alabama probate judges from enforcing the ban or following any order, including that from the Alabama Supreme Court, requiring them to do so. She stays the injunction pending a ruling from the U.S. Supreme Court in Obergefell v. Hodges.

June 26, 2015 – The U.S. Supreme Court rules 5-4 in Obergefell that the U.S. Constitution guarantees same-sex couples the right to marriage and requires all states to issue licenses.

July 1, 2015 – Judge Granade lifts the stay of her previous order. It is now binding for all Alabama probate judges.

July 27, 2015 – The SPLC files a second supplement to its ethics complaint against Moore, alleging that he has committed new ethics violations by improperly commenting on pending or impending cases in numerous speeches and interviews; by suggesting that Supreme Court precedent need not be followed; and by announcing that he would recuse himself from cases rather than apply precedents with which he disagreed.

Jan. 6, 2016 – Contradicting a U.S. Supreme Court decision and an order by a U.S. district judge, Moore issues an administrative order directing the state’s probate judges to continue enforcing the ban, saying the Alabama Sanctity of Marriage Amendment and the Alabama Marriage Protection Act “remain in full force and effect.”

Jan. 6, 2016 – The SPLC files a third supplement to its ethics complaints, saying that Moore’s “advising other judges to violate a federal court order … requires his removal” from office.

May 6, 2016 – Acting on the SPLC complaint, the Alabama Judicial Inquiry Commission charges Moore with six counts of violating the Alabama Canons of Judicial Ethics, all related to the order of Jan. 6, 2016.

Sept. 28, 2016 – The Alabama Court of the Judiciary holds a trial to determine whether Moore committed ethics violations. Moore is the only witness.

Sept. 30, 2016 – The Court of the Judiciary unanimously finds Moore guilty of all six ethics charges, citing his “disregard for binding federal law,” and suspends him without pay for the remainder of his term. He is also required to pay court costs. 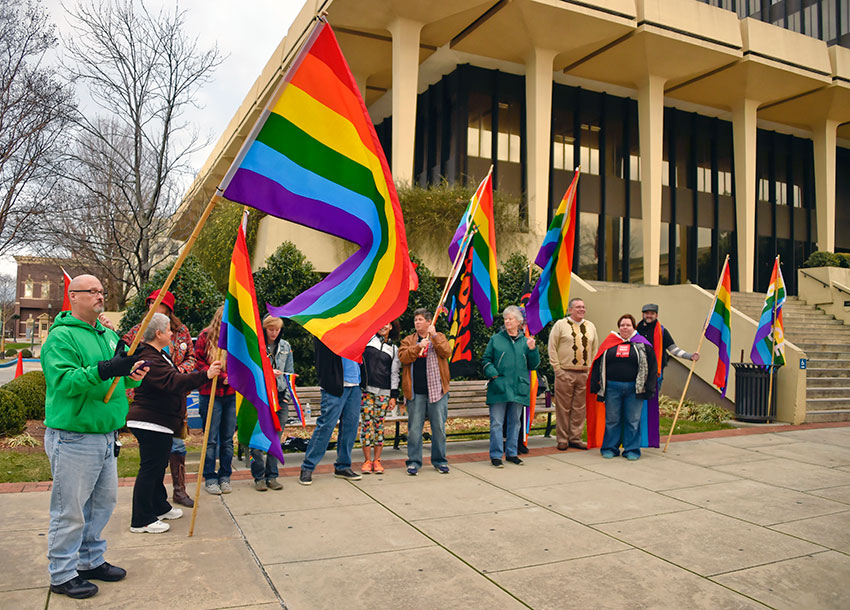 Marriage equality supporters rally in Huntsville, Ala., in 2016. (AP Images)