2021 marked more than the 50th anniversary of the Southern Poverty Law Center (SPLC). It was a year that under-scored the critical work that remains ahead for the SPLC and the nation. Nowhere was it more apparent than the Jan. 6 insurrection when a mob stormed the U.S. Capitol to overturn the results of the presidential election.

Despite democracy prevailing that day, it was a shocking reminder why we must do everything in our power to strengthen the constitutionally protected rights of the electorate and counter the embrace of extremist beliefs by elected officials and other public figures. As you read this annual report, you will see that this attack on democracy only strengthened our resolve.

At the SPLC, we have identified four areas of work — or “impact areas” — that offer the greatest opportunity for us to serve as a catalyst for racial justice in the South and beyond during this critical time. These four impact areas are protecting democracy, combating the incarceration and criminalization of communities of color, eradicating poverty and fighting extremism and white supremacy.

In the wake of Jan. 6, the SPLC testified twice before Congress. We explained how the extremist movement we have long fought is using social media and other technology to amplify its message. We also testified how this movement is targeting military veterans for recruitment into domestic extremist groups. Our Intelligence Project submitted analyses on these issues to congressional committees.

Our annual Year in Hate and Extremism report sounded another warning. It found that despite a decrease in the number of hate and antigovernment groups in 2021, radical-right extremists are becoming more emboldened by mainstream acceptance of their beliefs.

The year also saw intense anti-LGBTQ rhetoric from public officials and others across the nation, highlighting the importance of our LGBTQ rights work. Our lobbying arm, the SPLC Action Fund, was active in statehouses across the South opposing legislation to deny equal rights to LGBTQ communities. In New Jersey, a state court upheld the dissolution of a con-version therapy provider in a landmark case we filed years ago to combat this junk science that claims to change a person’s sexual orientation.

Of course, education is key to any anti-racism effort.

Despite remaining closed to the public in 2021 due to the pandemic, the Civil Rights Memorial Center also continued its efforts to engage and inspire people to pursue racial equity and social justice by publishing an anti-racism community guide. The guide is designed to support educators and advocates leading these important conversations about racism in their communities.

While the siege of the U.S. Capitol signaled that democracy was under attack in the United States, the SPLC in 2021 warned of a different attack occurring in the Deep South. We submitted three reports for the congressional record detailing racial discrimination in voting across Alabama, Louisiana and Mississippi. We were also in the courts fighting voter suppression laws passed in the wake of the 2020 election. The SPLC Action Fund worked in the halls of government — at the state and federal level — to guard against the erosion of voting rights and restore vital protections of the Voting Rights Act.

Looking to the future, we announced a massive expansion of our Vote Your Voice initiative over the next decade to support voter outreach and civic engagement organizations in several Southern states.

As the COVID-19 pandemic continued to disrupt people’s lives — and livelihoods — the SPLC fought for economic justice as part of our commitment to eradicate poverty. We sued the Georgia Department of Labor on behalf of people experiencing extreme delays in the processing of their unemployment claims. Elsewhere, we represented a coalition of more than two dozen farmers’ advocacy organizations as we worked with allies to ensure the viability of farms owned by people of color. In Louisiana, a lawsuit by the SPLC and co-counsel won class action status for 47,500 children who are entitled to — but do not have access to — Medicaid-funded mental health services.

We fought for criminal justice reform in 2021 as our nation continued to struggle with mass incarceration. In Alabama, a federal judge issued a sweeping order requiring the state to remedy the unconstitutional mental health services in its prisons — a welcome development in a long-running lawsuit by the SPLC and the Alabama Disabilities Advocacy Program. The SPLC Action Fund also championed much-needed criminal justice reform in Congress and legislatures across the South.

Throughout the year, we continued defending children’s rights to pre-vent them from being pushed into the school-to-prison pipeline. In Alabama, we filed a lawsuit to protect the rights of foster care youth with mental health disabilities. We also exposed how Florida children, particularly children of color and children with disabilities, are involuntarily — and often illegally — committed to psychiatric facilities.

Our immigrant justice work continued in 2021 with the Southeast Immigrant Freedom Initiative expanding operations from two detention facilities in Louisiana to nearly a dozen between the state and Mississippi. We also successfully fought Florida’s “anti-sanctuary cities” law with our allies. Meanwhile, the SPLC Action Fund opposed anti-immigrant bills in Southern legislatures. At the federal level, it pushed for meaningful immigration reforms that open paths to citizenship and challenge the inhuman treatment of people detained at immigrant detention centers.

A shared vision and passion

As I reflect on 2021, I, like many people, cannot forget the images of the U.S. Capitol under siege. I am thankful, however, that my memories of 2021 include the great accomplishments outlined in this annual report. I am inspired by the work by our staff. And I am grateful for your support, which makes our work possible.

There is no doubt we have more work ahead, but 2021 is proof that when people share a vision and passion for justice, equity and human rights, we can achieve incredible victories. It’s a lesson we won’t forget as we continue our work in 2022 and beyond.

Read the report by clicking on the image below 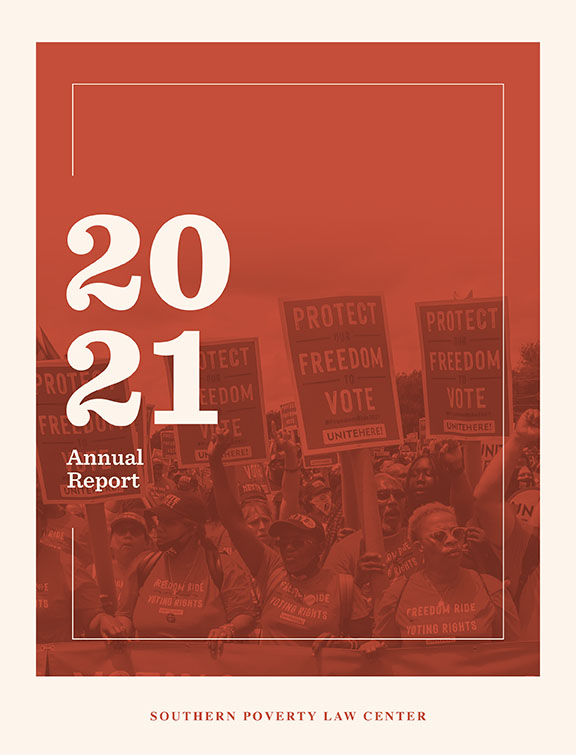