As you walk past the four-layered, double-barbwire fence and security cameras that mark the entrance to Stewart Detention Center, your phone is locked in your car, along with your laptop. The security camera spots you as the first gate opens slowly. The only thing in your hand is your client file, a pen and an ID.

Maneuvering past the second gate, you swivel past one of the employees of this immigrant prison before spotting the two bright flyers taped to the glass door, warning you of exposure to the mumps and chicken pox. You greet one of the two lobby workers and fill out the usual paperwork to see a client.

Then, the waiting game begins.

For the nearly 2,000 detainees imprisoned at Stewart, owned and managed by the for-profit company CoreCivic Inc., there are only 12 chairs for visitors in the lobby. As you sit, you look around, your eyes catching the tired faces of family members and close friends hoping to hear from the guards that they are free to visit their loved one. 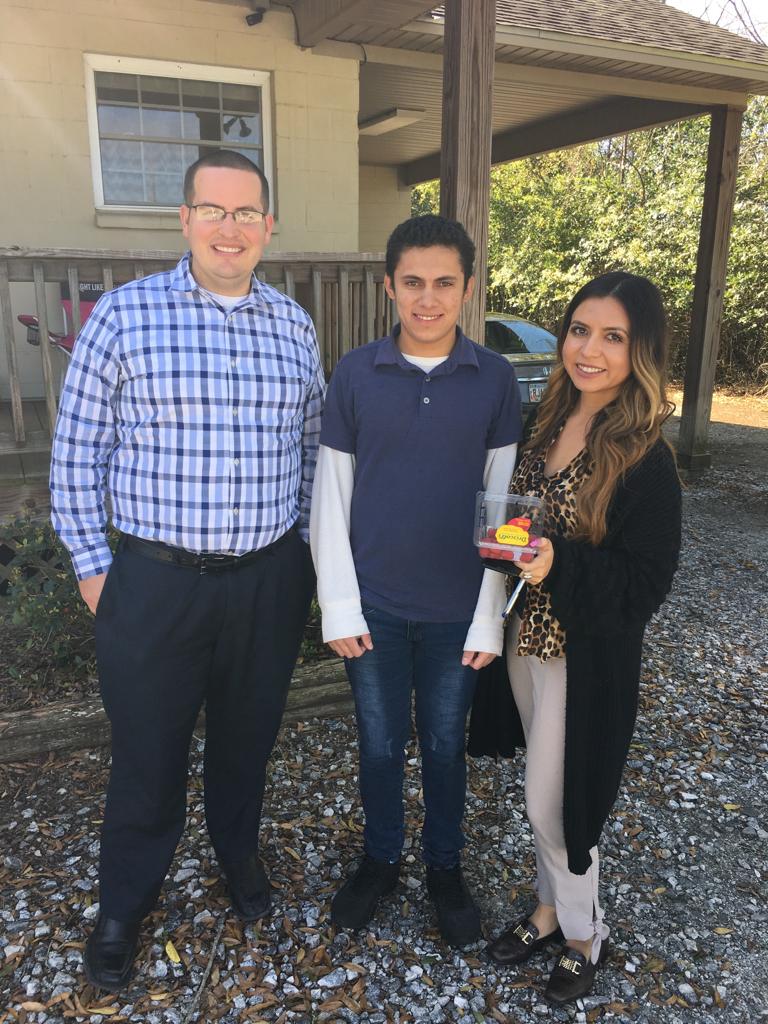 SIFI legal extern Anhelica Robles is pictured with SPLC Attorney Matt Boles and Joao, a 20-year-old SIFI client from Brazil, whose release she won last week. Joao was granted a $7,500 bond and released from detention. It's was Robles' first time arguing before a judge.

In the chair, your eyes dart from the metal detector to the TSA-style scanner. There is not much else to observe, except the young mother who comforts her baby, exhausted from the seven-hour drive it took to get to Stewart. Beside her, a father grows impatient as he waits to see his son for a one-hour conversation, during which they will be separated by a thick, dirty Plexiglas window. The father hopes to see his son smile.

Stewart lies in the tiny town of Lumpkin, Georgia. The nearest city is an hour away, and the nearest airport is three hours away. The town boasts one restaurant that closes at 4 p.m., a post office and dozens of abandoned storefronts. A lone hotel stands on the side of the road, its façade appearing as if the hotel hasn’t been open since the 1980s.

After a half-hour of sitting in silence, people begin talking and sharing stories. Two young men want to see their 20-year-old autistic nephew who has no idea how his case is proceeding. Next to them, a young mother cradles her restless toddler. She has secured the $7,000 needed for a lawyer, but her husband has lost his case and will soon be deported. It’s unclear how long it will be before the 2-year-old will see his father again.

Suddenly, the warden announces that some of the detainees have been quarantined. This means that only one visit – either legal and social side – can happen at a time. There will also be a half-hour “cleanup” between visits, where employees simply wipe down surfaces with Lysol.

Still sitting, you listen as the medical supervisor warns you of the “grave dangers” of your visit. He uses broad, vague language to describe how many instances there have been of the mumps, but you later find out from your client that no one in his unit has been sick.

Looking at the clock, you notice hour two of the waiting game has begun. The quarantine has slowed down the visiting process, and more family members pour in – more young mothers with tired babies, the mothers’ hands carrying their partner’s deportation suitcase. Friends add money to their loved one’s commissary account, so that the detainee can afford an $11 tube of toothpaste or $4 pack of ramen noodles. Only cash is accepted, the warden reminds the visitors, many of whom are unaware of this policy and are not able to provide more cash.

Soon, everyone grows weary and hungry. The wait seems to double. Food is considered contraband, so you’re grateful to have had a decent breakfast before starting your day.

Eventually, some family members are allowed to enter. A young woman, dressed in heels and wearing her Sunday best, walks through the door holding a stack of paperwork. She’s arrived at Stewart to get married to her detained fiancé.

But her special day is spent arguing with the warden, whom she barely understands. He says there is missing paperwork. The officiant, contracted through CoreCivic, is running late and arrives disgruntled, loudly complaining about her day.

The bride is finally allowed to enter, passing first through the metal detector before exchanging vows with the groom behind the Plexiglas window. She comes back 15 minutes later, married by law. No kiss. No ceremony. Just a long seven-hour drive home.

Three hours later, the warden calls your name. It’s now your turn to clear the metal detector. Shoes off, belts off, all sweaters and jackets off. All must comply with these rules, even small children.

When you sit down in the legal visitation room, you notice a phone connected to another phone on the other side of the wall.

Half of the time, the phone buzzes in your ear, making it impossible to hear your client accurately. The acoustics in the room pick up any outside noise, and the CoreCivic employees make sure to use their outdoor voices as you and your client speak. 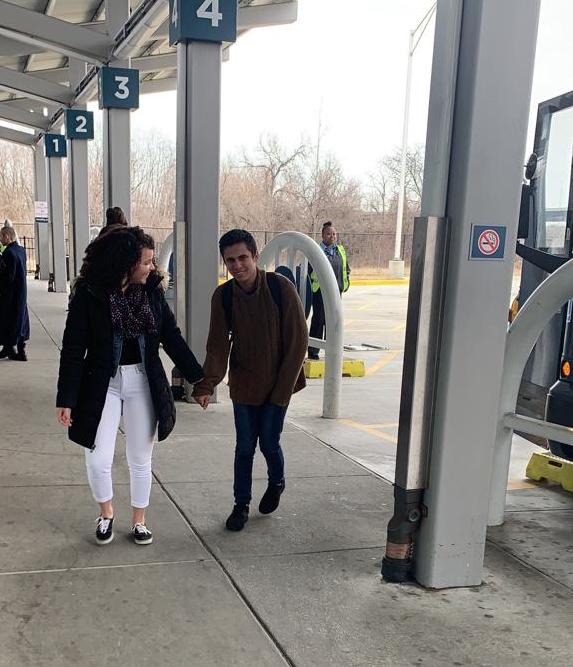 20-year-old Brazilian SIFI client Joao is reunited with his cousin, Eduarda, at a Greyhound bus station upon his release from Stewart Detention Center.

This really is a prison – though it’s called a “detention center” and the men here are being held not for crimes but because they’ve been accused of being in the country without authorization and are in deportation proceedings. Many were incarcerated simply for seeking asylum in the United States, which is their legal right.

Today’s task will be a screening, the day where you obtain information from the detainee about what led to his detention.

A young man walks in, looking no older than a high schooler. He looks nervous, afraid. You tell him who you are, who your employer is and begin the interview.

After he recounts his story, you must remind him that you are not guaranteeing his representation – a difficult reminder given that his story his heartbreaking. He’s just turned 18 and has spent months upon months traveling to the U.S. to seek asylum.

Your client says that after being beaten and threatened by local gangs who wanted to recruit him – followed by the police ignoring his pleas for help due to his dark skin color – he decided to walk from Honduras to the United States. He spent his 18th birthday homeless in Mexico, begging for food on the street.

Now he is stuck – locked up – at Stewart, one of the harshest immigration prisons in the country. Even though he did everything the “right way” and turned himself in at the border, he’s still detained, and his fate uncertain.

The possibility of deportation is very real, and the odds are stacked against him, especially at Stewart, where asylum is granted at a rate of 2%. The national rate is about 47%. Here, an asylum hearing almost guarantees a one-way ticket home – a ticket back to persecution and torture.

While the detainees await their fate, Stewart is their new home. They are coerced into working for as little as $1 a day. If they refuse, they face worse conditions during their detainment. They often complain about the quality of the food – that vegetables come with a side of worms.

If they have a medical condition, seeing a doctor may never happen. Seeing a nurse takes several days. You hear of a detainee who has complained about his heart, but he receives only medication so that he can sleep.

Behind the Plexiglass, you can see the mental and physical exhaustion in the detainees’ faces. They grow more hopeless with each passing day. Men have succumbed to suicide or have died due to medical mistreatment at Stewart.

As the hourlong visit with your client comes to an end, you walk back to your car – four hours after you first entered the steely gates of Stewart. You’re exhausted and emotionally drained. Leaving the immigrant prison, you notice the American flag, waving ironically beyond the barbwire.

In your mind, it’s crystal clear: Freedom and justice don’t happen for all, especially not for those behind these gates.

Anhelica Robles is working in the SIFI Lumpkin office for 13 weeks as a law student extern. She is in her final year at California Western School of Law.