BOAs are one of ICE’s latest schemes to use local law enforcement to find and deport immigrants. They are agreements between ICE and local sheriffs in which ICE promises to pay sheriffs $50 for every immigrant they hold and turn over to ICE, for up to 48 hours of detention.

Throughout January 2019, BOAs continued to expand across Florida and to St. Charles Parish in Louisiana. 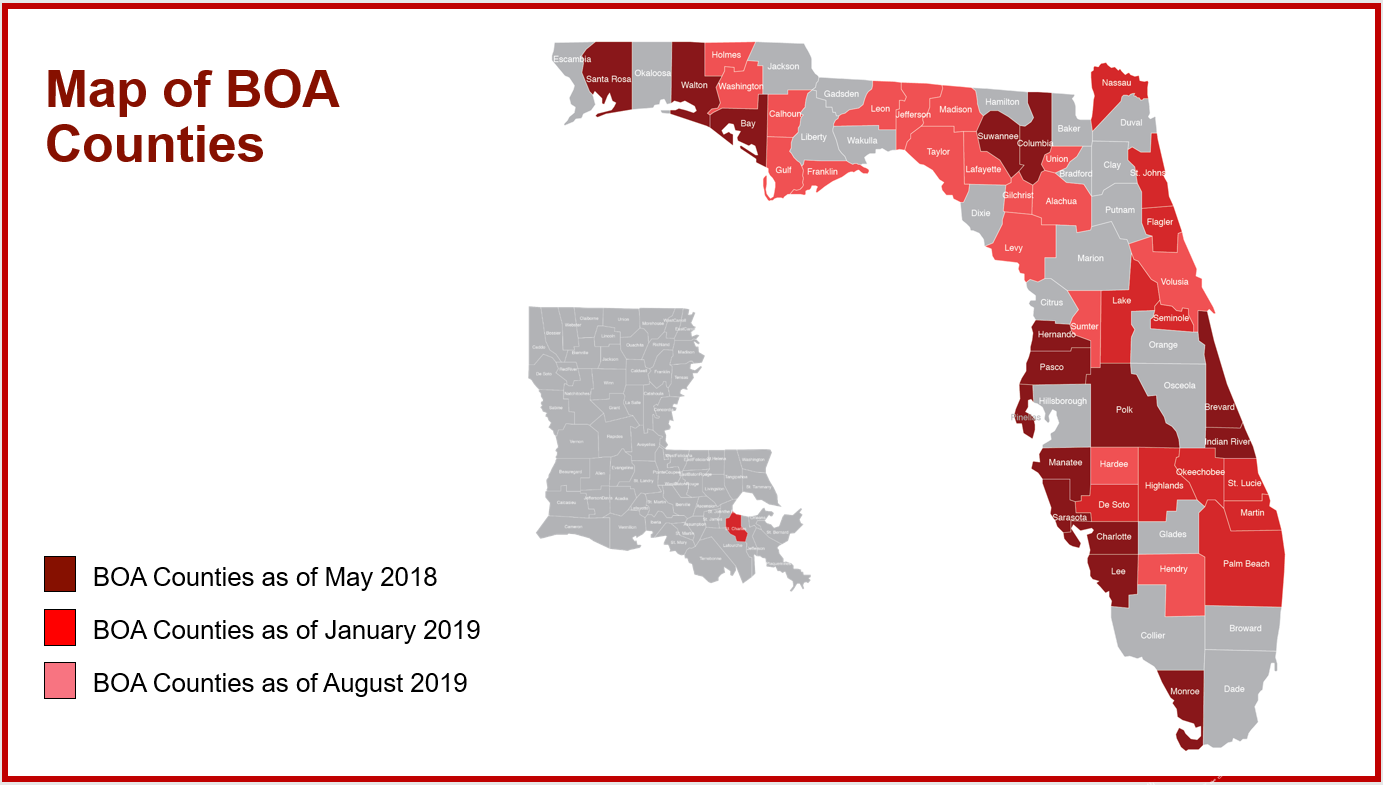 On May 2, 2019, the Florida Legislature passed the anti-immigrant and unconstitutional Senate Bill 168, enacted as Chapter 908 of Florida Statutes (“SB 168”). The law, drafted by anti-immigrant hate groups, forces Florida counties to help ICE find and deport people. Signing a BOA is specifically listed as a way to comply with SB 168.

Since SB 168 was passed, several counties that previously did not collaborate with ICE, including Alachua, Volusia, and Gulf, have now signed BOAs. Immigrants in those counties are now at risk of deportation if they get picked up by the police.

SPLC believes that BOAs are now operative in almost all if not all counties in Florida due to SB 168.

Multiple federal courts have ruled that it is unconstitutional for local law enforcement agencies to keep people detained in jail once their criminal cases have ended, in order to give ICE a chance to pick them up and deport them. As a result of those court rulings, many sheriffs in Florida became concerned that they, too, would get sued because of the unlawful holds, known as ICE detainers. In order to protect themselves, Pinellas County Sheriff Bob Gualtieri, the Florida Sheriffs Association, and ICE came up with a purported constitutional workaround: Basic Ordering Agreements.

In December 2018, the SPLC sued Monroe County Sheriff Rick Ramsay for illegally holding a U.S. citizen in the county jail on an ICE hold. The suit is the first to challenge a Florida sheriff for unlawfully detaining people at ICE’s request as part of a BOA. The SPLC is co-counseling this case with the ACLU, the ACLU of Florida, and Gibson, Dunn & Crutcher, LLP.

The SPLC has also sued Governor Ron DeSantis and Attorney General Ashley Moody, in their official capacities, to end SB 168.

Join Our Fight Against BOAs

The resources below are designed to help you prevent BOAs from coming to your community or advocate with your sheriff to cancel a BOA if your county already has one.  Not sure if your sheriff has a BOA?  DHS has not made a list of BOA counties public, so reach out to your sheriff and ask.

Basic Ordering Agreements: What You Need to Know

How ICE’s newest collaboration agreements with county sheriffs came to be and why they do not impact the illegality of ICE detainers.

Is Your County Collaborating with ICE?

BOAs are not the only way local law enforcement helps ICE find and deport immigrants. Community members can use the Transactional Records Access Clearinghouse (TRAC) to uncover the extent of their county’s collaboration with Immigration and Customs Enforcement (ICE).

How Basic Ordering Agreements Came To Be

Sheriff Bob Gualtieri of Pinellas County, Fla. thought that ICE detainers were unconstitutional – so he tried to come up with a workaround: Basic Ordering Agreements.

See what a Basic Ordering Agreement looks like and what your Sheriff agreed to.

Sample "Order for Supplies or Services"

Basic Ordering Agreements are only the latest in a long history of efforts by the federal government, particularly Immigration and Customs Enforcement (ICE), to enlist local law enforcement to serve as force multipliers in the detention and deportation of immigrants.

Contact the SPLC for more information on fighting Basic Ordering Agreements and other forms of collaboration with federal immigration enforcement in your own community.