Although antigovernment conspiracy theorists target government officialdom, these ideas are usually rooted in racist, antisemitic and sometimes nativist beliefs. Conspiracy theories have long been a staple in American political discourse, and today, extremists continue peddling these narratives to cast doubt on democratic processes.

The Southern Poverty Law Center has, over the years, reported on some of the more egregious assertions that conspiracy theorists make – a handful of which have spilled over from decade to decade. Some of the more persistent conspiracy theories have been adopted as core beliefs within conspiracy propagandist circles. A few of these beliefs include fears around door-to-door gun confiscations, martial law, supposed takeover of the U.S. by the “New World Order” and anxieties around the Federal Emergency Management Agency (FEMA).

During the four years of the Trump administration, extremists appear to have adopted, and, in some cases, merged with prior conspiracies leading to the QAnon movement. QAnon adherents mobilized to counter Critical Race Theory and a re-emergence of Red Scare-like talking points surrounding hysteria over such ideologies as communism, socialism, Marxism and anarchism.

With the internet and social media connecting thousands of people in an instant, conspiracy propagandists have become an almost infinite source of misinformation and disinformation.

As Capitol insurrectionists are identified and charged for the Jan. 6, 2021, melee in Washington, D.C., we are still seeing far-right conspiracies materialize into real-world demonstration. In a recent report published by the nonpartisan group Advance Democracy, researchers found that “while explicit calls for violence are no longer as prolific, misinformation about election fraud and conspiracy theories about the 2020 presidential election continue to be prominent.”

The findings fall in line with much of the activity organized over the past year with groups holding demonstrations for so called “political prisoners” (aka Jan. 6 insurrectionists) under the pretense that rioters were jailed for peacefully protesting. Similarly, demonstrations and activities near the Southern border have reignited xenophobic fears that portray migrants as violent criminals, jihadis and drug lords. As we head into the midterm election season, we expect far-right candidates to continue pushing the false narrative of the Big Lie, citing “election integrity” initiatives. These concepts are frequently accompanied by key buzzwords such as “voter fraud,” cries to count only “legal votes” and “election integrity” initiatives.

The modern-day conspiracy propagandist is fueled by the belief that American ideals are being eroded by liberal forces that aim to destroy the country from the inside out. The goal of this supposed cabal of liberal elites is to establish a communist/socialist/Marxist regime and renounce U.S. sovereignty, instead choosing to opt into a one-world government.

Paranoia is at the center of propagandist messaging. These individuals peddle narratives that paint the world as a battlefield between the forces of good and evil. The ideas, often riddled with misinformation and disinformation, target institutions and public figures that exist in contrast to their worldview. The issues faced by society today are depicted in apocalyptic terms that leave no room for compromise.

Extremists under the antigovernment conspiracy propagandist designation focus on presenting false, sometimes even fabricated information, as fact. With the emergence of social media, propagandists leveraged the ability to reach large numbers of uniformed people and flood online spaces with wild unsubstantiated claims decrying government institutions and key figures as being “tyrannical.” As a result, conspiracies have been allowed to flourish in an environment where misinformation and disinformation is dispersed among considerable amounts of valid and verified content.

Today, misinformation and disinformation have become crucial in helping sustain dangerous conspiracy theories, in some cases even supercharging narratives that have, as a result, mobilized large swaths of disgruntled Americans.

As historian Richard Hofstadter pointed out in his 1964 essay, “The Paranoid Style in American Politics,” conspiracies have always had a place in American history. In the 18th and 19th centuries, fears surrounding such groups as the Illuminati, the Masons and the Catholic Church were weaponized for political purposes. Today, baseless claims asserting plots to destroy the current political system, American values and cultural norms continue to find their way into political discourse.

The conspiracy propaganda wave we see today came out of the 1970s racist and antisemitic Christian Identity movement. Christian Identity adherents believe white Northern Europeans are descendants of the lost tribes of Israel, Jewish people are actually descendants of Satan, and non-whites are “mud peoples.” Many of the key conspiracies that define the conspiracy propagandist classification under SPLC’s antigovernment designation were born out of antisemitic falsehoods.

Those falsehoods were first popularized by antisemites such as William Potter Gale, who was instrumental in merging Christian Identity beliefs with a growing tax-protest, antigovernment movement. Gale preached about the Posse Comitatus, a set of principles that place ultimate government authority at the county level dictating the county sheriff as the highest authority and placing emphasis on common law, instead of constitutional law, as the foundation for government.

Strands of antisemitic and nativist beliefs are present in current antigovernment conspiracies.

Some of these ideas include the belief in an impending takeover by a communist scheme known as the New World Order (NWO). According to antigovernment conspiracy propagandists, the initiative would be facilitated by the United Nations’ nonbinding environmental climate agreement, known as Agenda 21/2030. Among conspiracy propagandist groups like the John Birch Society, Agenda 21/2030 is seen not as an agreement to reduce human impact on the environment, but instead as a blueprint to create a single government under a communist regime.

By the 1990s, such incidents as the standoff at Ruby Ridge, the Waco siege and the Oklahoma City bombing served as catalysts for conspiracy propagandists to vilify government agencies. Events involving law enforcement provided fertile ground for far-right extremists to double down on fears around mass gun confiscation. Combined with angst around the militarization of police forces, the events in this period culminated in the creation of two of the most influential antigovernment conspiracy propagandist organizations of the last two decades: WorldNetDaily and Infowars.

As the 20th century came to a close, far-right conspiracy theories thrived as the U.S. kick-started the “War on Terror.” Nativist talking points were elevated in antigovernment conspiracy theories, emphasizing anti-immigrant and anti-Muslim propaganda.

In the early 2000s, fears around “others” helped inspire waves of minutemen to appear at the Southern border under the pretense of defending the country from a supposed invasion. The conspiracy theories peddled by Alex Jones’s Infowars, Joseph Farah’s WorldNetDaily, and the John Birch Society pushed false concepts like “open borders” and the idea that the Democratic Party is helping facilitate an influx of migrants. Some conspiracy propagandists attempted to appear as legitimate news outlets and drove the fake news trend. As the U.S. continues to struggle with the best way to handle the migrant crisis at the Southern border, propagandists have managed to loop these theories back to antisemitic beliefs by tying the issue back to Jewish billionaire and philanthropist George Soros as a leading figure, allegedly funding migrant caravans with the aim to destroy the country’s identity.

By 2008, as Barack Obama was preparing to take office, antigovernment extremists reacted with contempt at the idea of swearing in the first Black president. They mobilized resentment to demographic changes and economic instability fueling antigovernment activity and wild conspiracies. As a result, SPLC documented a record number of active antigovernment organizations in 2010 and covered the unfounded claims that emerged in far-right circles denouncing Obama as a secret Muslim, a Kenyan naturalized citizen and demonic being.

The paranoia and skepticism around the U.S.’s democratic processes eventually reached a boiling point under the Trump administration. Between 2016 and 2020, old conspiracies were repackaged into such concepts as “the Deep State,” “Q Anon,” “Migrant Caravans,” “COVID-19 Chinese bioweapons” and the Stop the Steal narrative.

Unlike his predecessors, Trump openly engaged, reaffirmed and even helped establish popular conspiracy theories as valid ideas worthy of discussion in the mainstream.

With aid from longtime conspiracy theorists, Trump and his ilk were able to cast a blanket of doubt regarding the legitimacy of government institutions, elected officials and electoral procedures, leading to a crystallization of distrust and anger in the minds of his most loyal followers. The result of four years of politically charged antigovernment messaging was an attack on our current political system and served as the catalyst for the Jan. 6 insurrection.

In 2021, Trump fanatics continued pushing the false narrative that the 2020 general election was stolen. Right-wing propagandists continued advancing the idea that China released the COVID-19 virus into the world as a bioweapon to cripple the economy. Conspiracy theorists incorporated anti-LGBTQ falsehoods and targeted school curriculum and teachers. Conspiratorial ideas about the existence of antifa as a communist violent organization underpinned some groups’ actions. QAnon-related conspiracies about sex trafficking and the return of John F. Kennedy were prominent in 2021. Distrust also spread from the virus’s origin to the COVID-19 vaccine. Old fears around FEMA concentration camps were again embraced by antigovernment extremists and unproven claims around the COVID-19 vaccine increased vaccine hesitancy.

Infowars – Founded by longtime antigovernment conspiracy theorist and supplement salesman Alex Jones, the site has become a one-stop shop for an ever-growing list of uncorroborated stories. From atrazine in drinking water that’s turning frogs gay, to gorilla-pig chimeras, to voter fraud conspiracies, Jones has managed to branch out his program into a propaganda outlet specializing in mobilizing his loyal base to go after anyone he doesn’t agree with. Harassment campaigns stemming from conspiracies shared on his platform have targeted grieving families, elected representatives, government agencies and advocacy groups across the political spectrum. In December 2021, Jones sued the House Jan. 6 Committee to block subpoenas and withhold his testimony and records pertaining to the insurrection. Jones was a major figure in attendance that day and primarily used his platform to rile up Trump’s base before the capitol was stormed.

WorldNetDaily (WND) – Founded in 1997, and the product of Joseph and Elizabeth Farah, WorldNetDaily is a conspiracy-fueled online outlet that’s inundated with theories ranging from antigovernment fabrications to anti-LGBTQ misinformation and anti-Muslim falsehoods. The site was one of the prime propagators of the Obama birther conspiracy as well as a frequent producer of end-of-the-world theories. Most recently, the site has focused on spreading anti-vaccine narratives, and blasting liberal movements and politicians as agents working to undermine the interests of everyday Americans.

John Birch Society (JBS) – Founded in 1958, the JBS gained notoriety after the group dedicated much of their resources to pushing out anti-communist messaging. Since then, the group has mobilized around several issues, including supposed FEMA concentration camps, the New World Order, Agenda 21/2030, the Deep State and COVID-19, among many others. The JBS has been instrumental in keeping alive antigovernment conspiracy theories rooted in the racist Christian Identity movement, with philanthropist George Soros being a frequent target of their campaigns. In line with their belief system, the group today has widened their anti-communist platform to also include anti-socialist, anti-Marxist and anti-anarchist messages. At its peak, the JBS had between 60,000 and 100,000 members with national chapters across varies states in the U.S. Today, the JBS has been relegated to the fringes of mainstream politics, although their messages continue to be picked up and dished out by factions of the far-right. JBS was particularly active in 2021 as schools became a primary focus of antigovernment activity. 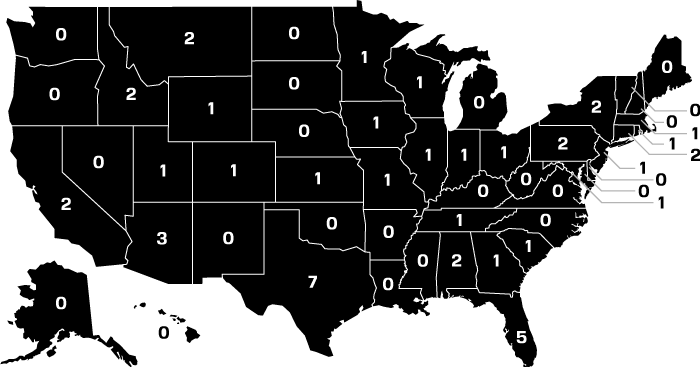 View all groups by state and by ideology.
*Asterisk denotes headquarters

What Really Happened
Santa Claus, IN*