Richard Butler had already lost the entire Klan faction of his organization. He'd lost his designated successor — two of them, actually — and failed miserably in his bid to become mayor of his Idaho hometown. Now, all the aging leader of the neo-Nazi Aryan Nations wanted to do was catch a quiet flight to Phoenix.

But one more humiliation lay in store.

Just as the 85-year-old white supremacist was getting ready to board his Nov. 7 flight from Spokane, Wash., police arrested his traveling companion on an outstanding warrant for forgery.

The 31-year-old tattoo artist, an attractive woman who liked to boast of her "100% Russian" blood, was carted away. It was only the most recent arrest of still another apparently low-life Butler companion, and it left a dispirited Butler to make the trip to an Arizona rally all by himself.

There was more, however. Within minutes of her arrest hitting the local newspapers, hundreds of friends and enemies of the Aryan Nations were shaking their heads over Butler's latest imbroglio. His friend, it turned out, was well known.

She wasn't just any old object of desire. Iwanow was the famed "Latin Princess," a woman who, as numerous racists were quick to point out, had publicly slept with men of color.

An Aryan Nations press release, issued after the incident produced snickers nationwide, sounded greatly annoyed. "Unfortunately," it sniffed, "there are some people who think that hiding out in Pastor Butler's house is a good refuge."

The episode was only the latest in a bad run.

In 2001, Butler had named a hard-core felon named Harold Ray Redfeairn as his successor to head the Aryan Nations. Redfeairn tried to oust Butler, left the group instead, made up with Butler, and was renamed heir apparent.

But then Redfeairn squabbled again with Butler and quit the group. Not long after, the Aryan Knights followed him out. Then, this October, Redfeairn died of apparent health problems — just as an earlier designated Butler heir, California racist Neuman Britton, did in 2001, shortly after being named by Butler. 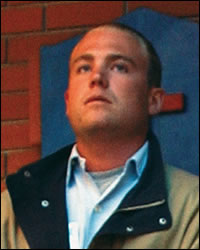 During the same period this fall, Butler had decided to run for mayor of Hayden. Running with him for City Council seats were two men who'd recently moved into Butler's home — Zachary Beck, 24, and Karl Gharst, 43.

The New York Times and any number of other papers did stories, but the neo-Nazi ticket did not do well. Butler managed to scrounge up 50 votes out of 2,122, while Gharst got 42. Beck did significantly better, winning 69 votes — but that did not include his own.

Sadly for him, Zachary Beck spent Election Day in the local jail, accused of walking up to a Latino man and punching him in the face.