Within days of the release of an internal report blasting the U.S. Justice Department for abusing illegal immigrants detained after the Sept. terrorist attacks, Attorney General John Ashcroft pressed Congress for even greater authority in new measures dubbed "Patriot II."

The Patriot II proposal, otherwise known as the Domestic Security Enhancement Act of 2003, would:

"We must be vigilant, we must be unrelenting," he told the House Judiciary Committee in early June. "We must not forget that al Qaeda's primary terrorist target is the United States of America. Even though recent attacks were overseas, the terrorist network is committed to killing innocent Americans, including women and children, by the thousands or even the millions, if they can."

Watchdog groups remained unconvinced by Ashcroft's rhetoric: "It's frightening that the attorney general is seeking more authority to detain people, to spy on them, and even strip them of their citizenship, when the Department of Justice's own inspector general has documented serious abuses of power that have already occurred in the government's anti-terror campaign," said staff attorney Ben Wizner of the ACLU of Southern California.

For the first time, the Act allowed for information exchange among law enforcement and intelligence agencies as well as the limited transfer of information from traditionally secret grand jury proceedings. It authorized the use of various mechanisms to speed up deportation hearings and increased the time that the Immigration and Naturalization Service could detain non-citizens.

Perhaps more significant, but less well known, has been the expansive application of legislation that predates 9/11. The attorney general took a rarely used and ambiguous section of the 1996 Anti-Terrorism and Effective Death Penalty Act, Pub. L. No. 104-132, 110 Stat. 1214., and made it a centerpiece of his counter-terrorism strategy. The controversial provision, which was later amended by the Patriot Act, punishes providing material support to terrorists without explaining what conduct constitutes such support.

Despite its ambiguity and some judicial criticism, Ashcroft has used the "material support" section in some of his most high-profile prosecutions, including those of John Walker Lindh; the Buffalo, N.Y., al Qaeda defendants; James Ujaama; and defense attorney Lynne Stewart.

Ashcroft's recently proposed reforms, introduced with his ominous rhetoric, might have been met less skeptically had they not come on the heels of his own inspector general's 198-page stinging report that documented serious problems in the detentions of illegal immigrants who had no apparent terrorist connections.

The detainees were held without access to attorneys or relatives for up to six months without formal charges — the average detention being 80 days. Many also were subjected to physical and verbal abuse from prison guards, according to the report; 515 of 762 were ultimately deported.

The report was yet another sign of eroding support for Ashcroft's agenda. Just the month before, the Senate rejected a Republican push to make permanent key parts of the Patriot Act that are scheduled to expire in 2005. Further fueling the climate of distrust was the fact that Ashcroft's efforts to lay the groundwork for expanding the Patriot Act were conducted in secret until his plans were leaked to news organizations through the Center for Public Integrity, which discovered draft memos dated January 9, 2003.

Growing Criticism
The attacks on Ashcroft, muted at first, have come from many quarters since the Patriot Act's passage, including civil liberties and immigrant groups. Now they are growing more obvious from both Democrats and Republicans. Criticism from Jerrold Nadler, a New York Democrat, that Ashcroft was making a civil liberties error tantamount to the internment of Japanese-Americans might be expected.

So might disapproval from U.S. Rep. William Delahunt, a Massachusetts Democrat. "It appears that the American people feel that the government is intent on prying into every nook and cranny of people's private lives, while at the same time doing all it can to block access to government information that would inform the American people as to what is being done in their name," he said.

While it is true that "our enemies are ruthless fanatics," Delahunt said, "the solution is not for us to become zealots ourselves so that we remake our society in the image of those that would attack us." 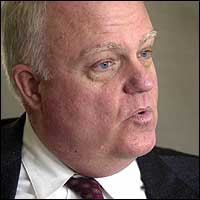 But few expected reservations from the influential Republican chairman of the Judiciary Committee himself, U.S. Rep. F. James Sensenbrenner Jr. of Wisconsin. Sensenbrenner said he was concerned about the effects of counterterrorism on civil liberties.

He warned, "I believe the [Justice] Department and Congress must be vigilant towards short-term gains which ultimately may cause long-term harm to the spirit of liberty and equality which animate the American character."

Sara-Ellen Amster is a freelance writer based in California.