At the third annual Alabama Tea Party, frightened right-wingers gather to keep the 'Cradle of the Confederacy' safe from leprosy, pedophiles, Spanish and rampant godlessness.

BIRMINGHAM, Ala. -- Accompanied by the mournful strains of a giant Wurlitzer organ, a crowd of almost 1,600 mostly white, mostly elderly Alabamians inside Birmingham's resplendent Alabama Theater this March sang "God Bless America" with gusto, swaying slightly while lifting their arms to the gilded ceiling.

Many had teabags lashed or stapled to their hats in honor of this special occasion — the third annual "Alabama Tea Party," a one-day, ultra-conservative gathering organized and hosted by husband-and-wife talk radio team Russ and Dee Fine.

The couple was well known to their audience. During their decade on the air at WERC-AM in Birmingham, the Fines have reportedly boycotted the Martin Luther King holiday. Their Web site has long linked to a racist anti-immigrant hate group, American Patrol.

When photos surfaced in 2001 of Auburn University Halloween parties where fraternity brothers dressed up in blackface and Klan robes and posed with nooses in front of a Confederate battle flag, Dee Fine belittled the ensuing protests. What the lads had done, she insisted, was no worse than dressing up as a witch — and "you don't see witches out there protesting."

The Fines specialize in launching attacks on illegal immigration, taxes and the separation of church and state. The goal of this year's Tea Party, their promotional material explained, was "to send a message to elitist officials that Alabamians are mad as hell" about these issues "and we're not going to take it any more!"

The event sometimes resembled an old-fashioned, all-American gathering of conservatives. But following "God Bless America," the pledge of allegiance, and the presentation of the American flag by the Jefferson County Sheriff's Department Honor Guard, Russ Fine showed that he was no shrinking violet.

"Today, the Alabama Tea Party declares war on illegal immigration in this state!" the goateed radio man roared. "If you intend to pursue the American dream, and we encourage you to do so, you will do it legally! You will pay all the taxes everyone else pays, and you will learn to read and speak our language!

"This is America, by God, and we speak English here!" 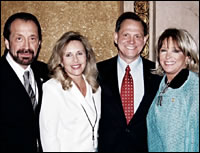 One of the Tea Party's "celebrity guest speakers" was former Alabama Supreme Court Chief Justice Roy Moore, who was accompanied by his wife, four children, and professional bodyguard Leonard Holyfield, the cousin of former world heavyweight boxing champion Evander Holyfield, a 10th degree black belt — and one of the very few black people inside the crowded Alabama Theater.

Moore, who is reportedly considering a run for Alabama governor, plugged his new autobiography, So Help Me God: The Ten Commandments, Judicial Tyranny, and the Battle for Religious Freedom.

He bemoaned his fate since being kicked off the Alabama Supreme Court for refusing federal court orders to remove the Ten Commandments statue he secretly erected one night in the state's Judicial Building. He spoke of the "moral foundation" of the law. All in all, it was the same speech Moore has given repeatedly at extremist gatherings in the last year.

Support for Moore is high in Alabama — polls show him leading other potential Republican gubernatorial candidates including sitting Gov. Bob Riley — and he enjoys a 72% approval rating among registered Republicans.

"No judge on earth has the authority to tell you you can't consider God!" he yelled to the crowd. "You tell 'em, Judge Roy!" a voice cried back.

Moore went on to defend his opposition to Amendment 2, the referendum that would have removed segregationist language from the Alabama constitution. Amendment 2 was defeated last November after Moore and a few other arch-conservatives campaigned against the proposition by claiming it would lead to court decisions that mandated tax hikes to fund the public school system.

"It's always about taxes!" the former justice bellowed.

Moore received a standing ovation. Next up was Hugh McInnish, a far-right-wing member of the Alabama GOP's executive committee as well as the Alabama Course of Study Committee for Social Studies, which oversees public education curriculums.

McInnish, an avowed enemy of multiculturalism, speaks regularly at events hosted by the Council of Conservative Citizens, which describes blacks as "a retrograde species of humanity." He also has corresponded with leading Holocaust denier David Irving about the gas chambers in Nazi death camps.

McInnish introduced Erin Anderson, a self-professed "illegal immigration expert," a regular on the "Russ and Dee Show," and one scary speaker.

Anderson said she grew up near the Mexican border in Cochise County, Ariz., where her ranching family settled in the late 1880s. Now, she splits her time between the family spread and Washington, D.C., where she works as an anti-immigration lobbyist.

Like Moore, she is a popular speaker on the far-right-wing conference circuit. Anderson is scheduled to appear in early September 2005 at the National Federation of Republican Assemblies' "Turn up the Heat on the Left!" national convention in Scottsdale, Ariz., and is booked to appear later that month back in Birmingham before the Mid Alabama Republican Club.

A professional alarmist with a baby-doll voice, Anderson fires up audiences with wild claims about Mexican immigrants, portraying them as disease-ridden, child-molesting "invaders" bearing down on an unsuspecting and hapless America. Transcripts of her speeches are regularly posted to widespread acclaim on white supremacist and neo-Nazi Web sites like the Vanguard News Network.

Anderson opened her presentation at the Alabama Tea Party with images of the World Trade Center and the Pentagon in flames. She then told the startled crowd that 2,000 to 3,000 illegal aliens tromp through her family's valley every night, claiming that "children trying to go to school risk being ambushed by illegal aliens. Every one of us has been ambushed at one time or another."

That certainly wasn't the end of it.

Anderson said there are schools in Latin America where Middle Eastern terrorists are training to pass as Mexicans once they infiltrate America. She said pedophiles from Mexico are flocking to the United States in droves to escape death at the hands of Mexican law enforcement.

She spoke of the deadly diseases illegal immigrants supposedly bring to America in their blood: west Nile virus, hepatitis B and C, tuberculosis. She said illegals have spawned an outbreak of leprosy near Boston, and have tainted the blood supplies in major metropolitan areas such as Houston, Miami and Los Angeles with chagas, a disease found mainly in Latin America that she claimed kills more people than AIDS and has no cure. (The truth is that chagas is only occasionally fatal).

Of all the stories Anderson told about the consequences of illegal immigration that day, it was the one about the Mara Salvatrucha that was the most chilling. Andersen said "La Mara," a violent, international gang of El Salvadoran nationals and immigrants formed in the late '80s, has left its U.S. base of Los Angeles and can now be found near large, well-established illegal alien communities. She dwelled in some detail on how La Mara likes to disembowel, dismember and scalp people.

"And yes," she told her audience to gasps, "they are here in Alabama."

Then Anderson held up her "proof" — a photograph clipped from a Birmingham newspaper story last fall about graffiti. The picture showed a building with "sureños" (Spanish for "southerners") painted on it. She did not explain how that piece of graffiti revealed the presence of the disembowelers.

For her final act, Anderson hauled out yet another piece of evidence, this one designed to prove that scary Muslim foreigners are invading the United States via our southern borders. A Muslim prayer rug, she told her audience as she displayed a shiny green rug, had been found near her family's Arizona ranch prior to 9/11.

Well, it wasn't actually the rug she was holding, she conceded. But it was "similar."

Flashbulbs popped. Frightened "oohs" and "ahhs" filled the room. This was one group of Alabamians who had been thoroughly warned.