Once, racist skinheads were regarded as too explosively violent to politicized. Two former Klansmen changed all that for good.

When young racists across the United States began emulating white-power British skinheads in the 1980s, it soon became apparent they had neither the discipline nor the charismatic leadership of the Nazi SS soldiers they idolized. They were loose cadres of ultra-violent outcasts, prone to poorly planned bursts of vicious, high-profile criminality, who found themselves as shunned by the leaders of established white supremacist organizations as they were by mainstream society.

That began to change after two Klansmen-turned-neo-Nazi leaders -- Tom Metzger in the mid-to-late 1980s, followed by Bill Riccio in the early 1990s -- showed that it's possible, at least for a while, to harness skinhead rage in the service of a larger racist cause. Where other hate group leaders saw drunken, unmanageable miscreants, Metzger and later Riccio saw disaffected but malleable foot soldiers in need of a father figure -- potential "shock troops" in the coming race war.

Like drug kingpins who use gangbangers to sling crack, these two merchants of hate enlisted and organized racist skinheads to do the dirty work of the white power movement. By doing so, they shifted the way racist skins are viewed by adult hate group leaders. While skinheads are still as likely as they ever were to get drunk and beat each other up or spontaneously commit a random murder, it's become the standard for neo-Nazi organizations like the National Socialist Movement and the Creativity Movement to seek out and recruit skinheads.

Metzger and Riccio showed the potential value racist skins hold for the white power movement in terms of generating publicity, fundraising, recruiting, and, when deemed necessary, brute force and intimidation. But these two self-appointed guidance counselors for neo-Nazi youth also unwittingly demonstrated the collateral damage skinheads cause their handlers when they learn their lessons all too well.

TOM METZGER
With his black cowboy hat and brash swagger, Thomas Linton Metzger has carefully cultivated an outlaw image over his 30-year-career as a racist. The tough-talking television repairman and former California grand dragon of the Knights of the Ku Klux Klan was the first major racist leader in the United States to invite skinheads into the organized white supremacist fold.

Metzger's youth outreach efforts even predated the arrival of racist skinhead culture in the U.S. in the early 1980s.

When the first domestic crop of racist skinheads began sprouting in the early-to-mid 1980s, White Aryan Resistance and the Aryan Youth Movement quickly moved to become the first hate groups where skinhead culture and exploits were celebrated rather than shunned. "I was the first in the country to recognize skinheads and befriend them" Metzger told a reporter in 2004.

Metzger tailored his pitch to suit the skins' affinity for rebellion, portraying his group as anti-authoritarian and pro-working class. "WAR wears no uniform, carries no membership card, takes no secret oath," he said.

Metzger and a handful of skinhead protégés made the rounds of television talk shows, defining skinhead culture for the shocked audiences of Oprah Winfrey, Geraldo Rivera and Phil Donahue. He established a 24-hour WAR telephone hotline, with outgoing racist messages scripted for skinheads, and supplied early skinhead crews with free bundles of WAR and AYM publications to distribute on their own turf. These tactical moves were intended to make all racist skinheads and potential skinheads feel part of a growing national phenomenon.

While he formed a particularly close alliance with American Front (one of the first skinhead crews to develop chapters in multiple states), Metzger wasn't choosy. In 1988, he and his son John threw the first-ever hate rock festival, Aryan Fest, which was open to all skinheads. Skins from all over the country traveled to the festival in Oklahoma. From that point on, Metzger was a sought-after speaker at rallies and concerts sponsored by a variety of crews.

One of Metzger's most devoted followers was Dave Mazella, a California skinhead who took part in the traveling skinhead circus Metzger put together for the talk shows. "Tom Metzger was like a father to me," Mazella later said. After their nationally televised appearances, Metzger promoted Mazella to vice president of AYM, where he reported directly to John Metzger.

When word reached WAR's Fallbrook, Calif., headquarters that independent skinhead gangs in the Pacific Northwest were rapidly gaining strength, Metzger dispatched Mazella to Portland, where the WAR emissary used videotapes of his talk show shenanigans to get in with the members of East Side White Pride. John Metzger also sent ESWP a letter of introduction that read in part, "You'll get a feel of how we work when you meet Dave Mazella."

In Portland, Mazella arranged for ESWP members to talk to Tom Metzger directly on the phone, and drove the Portland skins around in his van to local high schools, where they distributed AYM papers. He led them in violent attacks to prove his bona fides.

On Nov. 12, 1988, three weeks after WAR's emissary arrived in Portland, ESWP skinhead Ken Mieske beat to death an Ethiopian immigrant. The first person Mieske called after the murder was John Metzger. After Mieske and two other ESWP skins pleaded guilty to murder, the Southern Poverty Law Center sued both Metzgers on behalf of the victim's family and won a $12.5 million wrongful death verdict that ruined the Metzgers financially.

While the money trouble and public scrutiny forced Metzger to stop networking directly with skinheads, he maintained the WAR hotline and kept publishing white supremacist pamphlets.

In 1993, then 17-year-old Richard Campos was arrested for a series of firebombings in Sacramento, Calif. His targets included the house of a Sacramento city councilman, an NAACP office, the office of the Japanese American Citizens League, a synagogue, and a state anti-discrimination office. Investigators found that Campos had called the WAR hotline to listen to Metzger's messages 34 times in a single month just before he carried out the bombings, which Campos had credited to the "Aryan Liberation Front," a domestic terrorist organization of which he was the only member. Campos told police he'd become "racially aware" after reading a White Aryan Resistance flyer. Campos was tried as an adult, convicted, and sentenced to 17 years in prison.

Since the civil judgment against him, Metzger has advocated "lone wolf" white supremacist activism, which is leaderless and covert. A lone wolf, according to Metzger, "gathers intelligence and carefully digests and develops this information into thoughts and suggestions." Then he acts.

Metzger, who recently moved to Warsaw, Ind., continues to speak at skinhead rallies, although his organization is now little more than a publisher. In January 2004, he addressed a crowd of about 100 skinheads at a hate rock festival outside Phoenix that was organized by the Portland, Ore.-based skinhead crew Volksfront. "Don't operate like a battleship," he shouted. "Operate like a Nazi submarine! Use your periscope! We have to infiltrate! Infiltrate the military! Infiltrate your local governments! Infiltrate your school board! Infiltrate law enforcement!"

And remember, he said, "You are not domestic terrorists. You are freedom fighters." 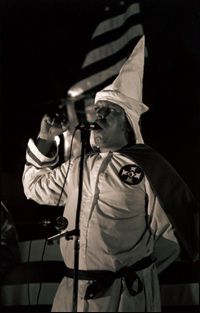 BILL RICCIO
"Send us your broken toys, and we'll fix them," Bill Riccio said to the camera.

It was 1992 and Riccio, then 35, was starring in the HBO documentary "Skinheads, U.S.A." that detailed life inside the Aryan Youth Front, a skinhead crew organized by Riccio and based in Birmingham, Ala. Though he was not connected to Metzger, Riccio had originally called his loyal band of racist misfits White Aryan Resistance. He changed the name to avoid confusion, but kept calling the backwoods shack he rented "the WAR House."

The WAR House was equal parts skinhead recruiting station, clubhouse, and crash pad. It was where Riccio, a former Klan chaplain, kept his toy soldiers, who were white teenaged boys, many of them runaways. He plied them with beer, and systemically indoctrinated them in racial hatred and his own special brand of neo-Confederate Hitler worship.

As Riccio explained in the documentary, his ultimate goal was to reclaim the South for pure Aryans. "Those n------loving race traitors can go move to San Francisco or somewhere else where they might feel more welcome among its large gay population," he said.

Though based in Birmingham, at the height of his influence, in mid-1992, Riccio was the de facto Nazi youth troop leader of a network of at least 70 skinheads in Alabama, Florida and Georgia. (Riccio worked closely with the Confederate Hammerskins.) Skinheads from as far away as York, Pa., made pilgrimages to the WAR House. By that time, Riccio had been convicted in 1979 of possessing a sawed-off shotgun, in 1981 of violating probation by illegally possessing a firearm, and in 1985, again, for illegal possession of a firearm, as well as marijuana.

While Metzger benefited from the media attention and the revenue generated by his skinhead outreach, Riccio seemed to simply adore being adored. He didn't profit from his skinhead followers -- the WAR House was funded by his small auto-parts business -- but he did enjoy their unconditional loyalty.

"I wish Bill would have been my biological father," one of the teenaged AYF skins says in the HBO documentary. "He is my father. He's all these youths' father, every single one of us."

Riccio worked hand-in-hand with Alabama Klan leader Roger Handley. In November 1991, they co-hosted a huge skinhead and Klan gathering on Handley's farm. The two co-organized a white power march by 150 skinheads and Klansmen through downtown Birmingham the following June. (When Handley was later brought up on sodomy charges involving a teenaged boy, Riccio defended him, dismissing the accusations as false and obviously part of a law enforcement conspiracy to defame the Klan.)

The lessons Riccio taught were not child's play. Skinheads under his sway committed at least two murders in Alabama. In one of those cases, three skins were arrested for beating and kicking a homeless man to death under a railroad trestle in April 1992, just hours after attending an Adolf Hitler birthday party at the WAR House. One of the killers, then 17-year-old Confederate Hammerskin Mark Lane, had written on his application that he wanted to join the movement "to benefit my race and help my brothers and sisters of the Aryan persuasion destroy all the scum and degenerates of our land."

Four months later, in August 1992, the WAR House was raided as part of multi-state sweep of white supremacist groups. Police found guns and grenades on Riccio's property, and arrested him again for illegal weapons possession.

After serving 15 months in federal prison on a conviction for that felony, Riccio moved back to the WAR House and renewed his devotion to the Klan, eventually becoming Imperial Kludd, or national chaplain, of the North Georgia White Knights of the Ku Klux Klan.

Today, Riccio still occasionally shows up at Klan events with a detail of skinheads in tow, and some of the first generation of broken toys he wound up and turned loose, who are now in their mid-to-late 20s, remain active in the white supremacist movement.

As the judge who sentenced him in 1992 put it: "It is [Riccio's] apparent ability to organize and mobilize disenchanted young white males even to acts of violence that makes him dangerous."